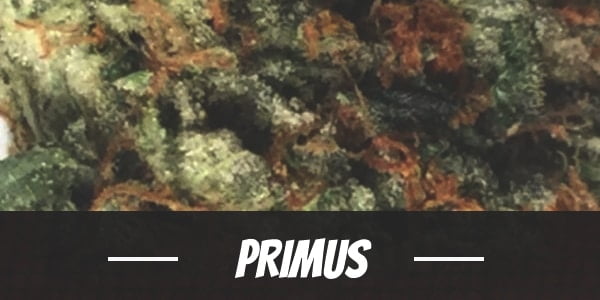 Primus is an Indica strain most commonly found in Washington. It is a three-way cross between 303 OG, Arcata, and Trainwreck. The last two combine to create the famous Sativa-dominant Arcata Trainwreck which induces impressive mental effects. However, it is from the first that it garnered its structure from. Not only that, the Indica-dominant is highly potent.

It is not surprising for Primus to have up to 23% THC. After all, all three of its parents test high for presence of psychoactive substances. As such, it is a great choice for seasoned consumers with high tolerances. Still, beginners may enjoy the strain under the guidance of someone with more experience.

The Indica-dominant herb also has immense therapeutic value. People may use it to relieve conditions that plague both the mind and body.

Primus OG is prized among many enthusiasts for its long-lasting buzz. It starts slow though, usually with a rush of euphoria that swarms the mind 15 minutes after the first two or three puffs. It inspires a happiness from within that leave users feeling uplifted through and through.

Still, in spite of the subtle mental clarity it induces, it is not a bud to be smoked during the day unless one were without tasks to do. This is because it plants a heaviness in the limbs that prevents one from moving around especially as the Indica effects manifest after an hour or two has passed. It relaxes the muscles and frees users of tension.

It is only a matter of time until users begin to get drowsy. And, with it is a certainty that one will fall into deep and unencumbered slumber.

The best time to consume Primus is arguably only at night. As mentioned, it has powerful long-lasting effects that have the ability to put many in a heavily sedated state. Hence, functioning under its influence can be next to impossible.

Primus boasts a sweet and sour fruity fragrance that comes with strong floral overtones. Blending with it are rich notes of wet soil with undertones of skunk that permeate in the room once the buds are crushed or combusted.

Primus has a pleasant floral flavor that swarms the palate at the first puff. Enhancing it is the taste of sweet fruit with subtle hints of sourness. On the exhale, hints of wood, pine, and skunk leave a delicious aftertaste in the mouth.

Dry eyes and a cottonmouth are two of the most common reactions to using Primus OG. This is because THC, as well as other cannabinoids found in marijuana, interfere with the body’s ability to produce moisture. The mild side effects usually go away after a few hours but, if symptoms persist, users may want to down a few glasses of water and stay hydrated.

Depending on the dose, Primus OG can cause users to ‘green out’ which is a condition characterized by a temporary dizziness accompanied by possibly high levels of anxiety. Users may also feel a little paranoid. Pacing and moderation, however, will lower the chances of such adverse reactions.

Ask any enthusiast as to why they use marijuana and, most likely, the answer will be ‘stress relief.’ To this end, Primus OG works perfectly. It induces a happy high that fosters a sense of calm. The same anxiolytic properties also relieve the overwhelming dread that often comes with high levels of stress.

As an Indica-dominant bud, however, Primus’ best use is arguably its physical effects. It soothes each muscle through and through. And, in totally relaxing the body, it relieves pain caused by either swelling or inflammation.

Stress and pain are two things that everyone suffers from. Even though the severity of which varies by person, anyone can look to Primus for relief. The reason for that is because it’s a powerful stress buster and painkiller. When consumed for either affliction, it’s almost certain to provide immediate comfort.

Primus is good at fighting inflammation despite it not having lots of CBD. Additionally, it is a potent sleep-aid that can help insomniacs get the rest they need. Finally, the strain is also great at fighting minor nausea.

Primus has the typical traits that many Indica-leaning herbs share. It is stout with thick stalks, as well as branches, that are quite sturdy. However, this does not guarantee high resistance against a wide variety of problems including strong gusts of wind, fluctuations in weather, and high levels of moisture in the air. For this reason, it may not be the best choice to grow the plant outdoors.

This is not to say it will not thrive well in farms or gardens rather that it requires the expert case of an experienced grower. Beginners may accidentally stunt its growth or, worse, kill it through overfeeding or overwatering which not only diminishes yields but also cause its roots to rot.

For this reason, it is better to cultivate Primus in a controlled environment where aspiring growers can easily adjust factors that are beneficial to it. It also does not grow tall which means one need not top the plant early. However, it does require constant pruning due to its density which can sometimes harbor moisture that develops into mold or mildew.

Applying the Sea of Green method and Low Stress Training techniques will increase yields. As for mediums, one may use either hydroponics or soil. The former increases potency whereas the latter makes the strain produce tastier buds.

Primus has an indoor flowering period of 7 to 9 weeks. Once ready for harvest, growers harvest between 10 to 12 ounces of buds per square meter.

Farm or garden grown Primus flowers from the last week of September to the second or third week of October. Once mature, it yields at least 12 ounces of buds per plant with potential for more under the care of an expert grower.

Have you ever smoked or grown your own Primus? Please let me know what you think about this marijuana strain in the comments below.