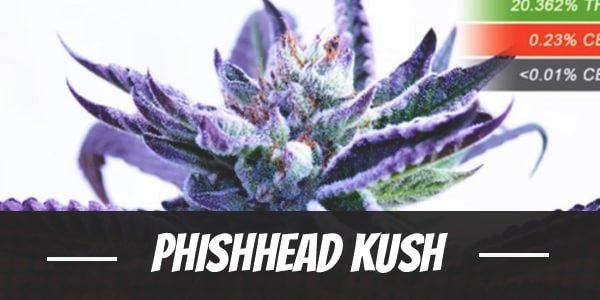 As of 2018, Phish celebrates 35 years in the American music industry. Whether for the jam band’s music or not, the group has stayed relevant as a cult favorite thanks to its fans the phishheads. And, in honor of their dedication and the music, The Clinic developed a strain named ‘Phishhead Kush.’

To create it, the breeders crossed a landrace Indica originating from the lowlands of Afghanistan which is famed for its heavy hitting body effects as well as its creeping head high. It was later crossed OG Kush, the genetic backbone of many West Coast cannabis strains and is among the most legendary buds in the industry.

Since its inception, Phishhead has gained a massive following from the band’s fanbase and among enthusiasts. It is mentally and physically relaxing. While its medicinal effects are well documented, the pure Indica also has impressive recreational potential because of its high THC levels 17% which can test beyond 20%. Adding to its appeal is its striking purple colors that do not only show up on its buds and leaves.

Phishhead Kush appeals to Indica-lovers looking for a creeping cerebral onset. It is a slow starter like many Indicas and usually begins about 15 to 30 minutes after the first few puffs. But, once it begins, it swarms the mind with a rush of euphoria that leaves one feeling happy.

The behavioral change is immediately noticeable. As users slip into a state of bliss, a heightened sense of sensitivity makes light and sound seem very trippy. Still, most become talkative and giggly during this phase.

After about an hour or two, a light pressure ebbs down from the temples in waves. It soothes each muscle and replaces tension in the limbs with a heavy pressure. Still, the earlier mental effects persist to keep the body high from sedating the user. Instead, it deeply relaxes.

Phishhead Kush has a pleasant fruity fragrance that smells similar to the sweet scent produced by crushed berries and grapes. Subtle woody undertones of pine, as well as a hint of earthy spiciness, that intensifies once the bud is combusted.

Drawn in, Phishhead Kush bursts with fruity flavors of grapes and berries. Complementing it are sweet herbal undertones as well as a barely noticeable sour tinge. On the exhale, it leaves a rich earthy aftertaste.

Marijuana’s moisture-inhibiting cannabinoids affect the salivary glands and tear ducts the most. As such, users may feel the eyes dry and a cottonmouth ensue. Neither are a cause for concern though as both tend to be mild. It also goes away on its own but, if symptoms persist, users may down a few glasses of water to help relieve the dehydration.

Apart from the unavoidable dry spell, users may also experience a phenomenon called ‘greening out’ which is characterized by dizziness, anxiety, and the subtle feeling of paranoia. This is a rare occurrence that is often brought about by overconsumption however, it can also be influenced by an uneasy disposition before the high. In such cases, it is best to avoid smoking the bud at all.

Phishhead Kush has immense therapeutic value. After all, it is a product by the Colorado-based medical dispensary The Clinic. In inducing its happy high, for example, it temporarily provides comfort to many people suffering from depression or PTSD. At the same time, it helps decrease stress.

The same psychoactive compound also stimulates the stomach as well as encourage a hearty appetite. For this reason, it is a great choice for people with eating disorders such as anorexia or patients who have developed cachexia due to the harsh side effects of illness.

As an Indica, Phishhead Kush’s analgesic properties are powerful. It totally relieves various aches beginning from the temples including the sharp sting caused by cramps. And, once it envelops the body in a soothing relaxation, going to sleep is easier.

Like most medical strains, Phishhead Kush’s seeds are not publicly available. Its breeder, The Clinic, has chosen to uphold its proprietary rights on its many of its products. This keeps people from creating fake merchandise so users are assured of a premium quality bud.

With that said, Phishhead Kush’s growth profile is determinable through its classification and structure. Its medicinal and commercial purpose, for example, hints that it is almost always grown indoors. Controlled environments allow growers to control lighting, temperature, and humidity so a chemically stable bud is produced each time. Moreover, indoor spaces provide additional protection from pests.

Meanwhile, its Indica genes give it a short stature and hardy structure. It fits in most growing spaces and rarely requires topping. However, those with truly limited spaces may shorten the vegetative period. It also responds well to the Sea of green method.

Phishhead Kush produces small, popcorn-shaped buds. It is also quite dense and may be prone to mold and mildew as moisture sticks to its recesses. As such, the Indica requires pruning and proper ventilation.

Phishhead Kush has an indoor flowering period of 7 to 9 weeks. Once ready for harvest, it produces an average of 10 to 12 ounces of buds that per square meter.

Outdoors, Phishhead Kush has a flowering period of the last week of September to the middle of October. It yields at least 12 ounces of buds per plant.

Have you ever smoked or grown your own Phishhead Kush? Please let me know what you think about this marijuana strain in the comments below.