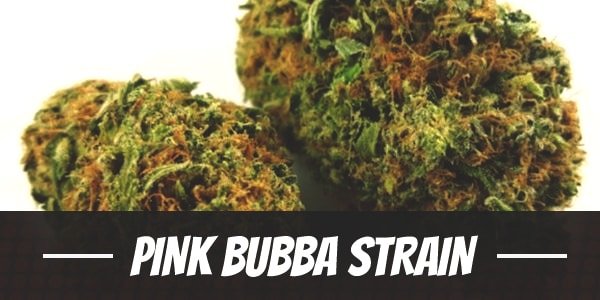 Many users find comfort in Pink Bubba. Not only for its recreational effects, but also for its soothing head high and tranquilizing body effects which improve one’s mood. Although, nothing short is expected of a strain one would affectionally call a brother.

In developing the strain, its breeders took two of the most globally successful descendants of OG Kush. From Bubba Kush, it gained its dreamy euphoria and strong earthy overtones. Meanwhile, Pink Kush influenced its potent THC levels of 25% while adding in the bud’s subtle floral undertones.

Download my free Grow Bible and grow your own Pink Bubba!

Despite all the mystery surrounding it, Pink Bubba’s reputation continues to be on the rise. It is not only powerful, but also pharmacologically valuable – boasting up to 2% CBD. It is best reserved for the evenings though. Its heavily relaxing head and body high might interfere with one’s plans for the day.

Most strains slam users with an intense head high right after the first puff. The experience can be quite harrowing for some, especially those sensitive to the effects of THC. It is to this end that Pink Bubba is quite unique.

Rather than overwhelming enthusiast almost immediately, its onset creeps in around 15 minutes later with a soothing euphoria that takes the mind to paradise. The feeling of supreme bliss makes users smile from ear to ear. It inspires a happiness from within. So much so that it seems one is shines bright like the sun.

Although, it may be better to prepare some snacks ahead of time as the gentle mental effects does stimulate the appetite. Without food nearby, it would be too late to grab a bite once the heavy-hitting effects take over.

A dream-like haze follows suit as users experience the impressive Indica effects of Pink Bubba. It starts at the temples as a light pressure that gradually intensifies with each toke. Pretty soon, the body succumbs to the bud’s totally tranquilizing high until finally a heaviness sets in the limbs. Fighting the urge to sleep becomes difficult until eventually users doze off to dreamland.

As alluded to earlier, Pink Bubba is a slow starter. As such, the best way to consume it is to start with a low dosage and slow building it up.

Even before opening a bag of Pink Bubba is opened, the pungent scent of wet soil is apparent. It is accentuated by woody notes of pine as well as a subtle floral tinge which further intensify once the buds are broken apart or combusted.

In the palate, Pink Bubba tastes a little sweeter and more floral. Overtones of wet soil and wood wash over the mouth as its delicious smoke is savored. Meanwhile, on the exhale, it leaves the refreshing aftertaste of pine which lingers even after the last puff.

A cottonmouth and dry eyes are two of the most common reactions to Pink Bubba. After all, marijuana does have cannabinoids that interfere with the production of moisture in the salivary glands as well as the tear ducts. Thankfully, neither are a cause for concern. Still, their mildness can be a source of discomfort for users who are unused to the dry spell. Downing a few glasses of water, as well as staying hydrated, will help soothe the ache.

Users may also ‘green out’ while using Pink Bubba. It is a condition characterized by either a subtle dizziness or temporary headache with a slight chance of anxiety. However, this is rare occurrence and mostly affects users who overconsume the strain although those who are sensitive to THC. As such, one should refrain smoking exorbitant amounts during sessions especially since the effects can last for hours.

Presumably, Pink Bubba was developed for the recreational community. Still, it remains a valuable strain to medical marijuana users for the beneficial effects its cannabinoids bring. In inducing its mood-enhancing high, for example, it reduces stress which can lead to the early onset depression if left unattended. Apart from uplifting spirits, it also calms the mind of turbulent emotions brought about by overwhelming anxiety.

The same stimulating compound also has analgesic properties that ease pain caused by spasms. In fact, in relaxing the stomach of sudden contractions or hunger pangs, Pink Bubba stimulates the appetite so users suffering from anorexia or those with cachexia can dig into a meal without feeling like vomiting.

Fully relieved, it is not uncommon for the eyes to become droopy with drowsiness. And, as the sedating effects persist, users recline to bed fully at ease and feeling refreshed the next day.

Despite its name, this strain does not produce pink yields. Nonetheless, its buds are still very attractive. Placed in the palm of one’s hand, it is heavy with density. Striking yellow green hues immediately catch the eye right after a rich layer of trichomes, which allude to its potency.

Pink Bubba is a sturdy strain that thrives in the hot and humid weather of the tropics as well as the cool, dry climate of many countries in the north. Its thick, resilient stalks do not sway easily when fazed with strong winds while its strong branches are not one to break off at the weight of its heavy buds.

Indoors, it may need to be pruned often as its compact structure can get in the way of its own potential. Thinning it out by cutting away dead branches will help light reach lower-end branches. It also encourages better air circulation so any moisture stuck to it is dried out. In this way, too, growers can prevent mold or mildew from forming. Techniques like Sea of Green and Low Stress Training are effective ways to improve yields and trichome production as well.

It typically takes Pink Bubba 7 to 9 weeks for Pink Bubba to flower outdoors. By harvest time, each square meter yields 10 to 12 ounces of buds. Applying the Sea of Green method will encourage the plant to perform better, yield higher, and even flower faster.

In the northern hemisphere, Pink Bubba flowers from the last week of September to the second or third week of October. Aspiring growers typically harvest at least 12 ounce of buds per plant.

What is the Pink Bubba strain yield?

How much THC does Pink Bubba have?

What are the origins of the Pink Bubba strain?

Pink Bubba was created from a mix between Bubba Kush and Pink Kush.

Have you ever smoked or grown your own Pink Bubba? Please let me know what you think about this marijuana strain in the comments below.