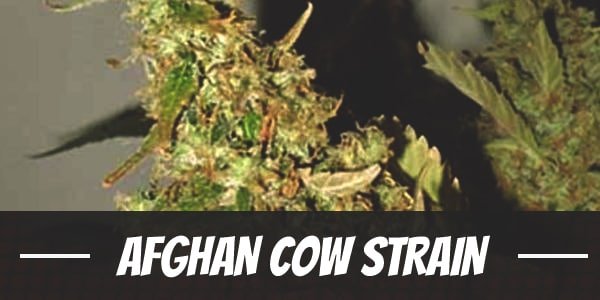 Dr. Krippling Seeds has a knack for developing exotic strains. Most of which have exceptional yields and unique flavors including their famous Afghan Cow, which has dominated the cannabis industry with its high THC levels of 18% to 22%.

In developing the strain, the creators use three cannabis strands – Ash, Kaya 47, and Kali Mist. The first two are descendants of the legendary Afghani, which has spawned children with tranquilizing effects all over the world. Meanwhile, the last is the Sativa-dominant herb responsible for Afghan Cow’s mental clarity and high-flying cerebral high.

The resulting offspring is a hybrid with great wake-and-bake qualities. And, because of this, casual users with work ahead of them need not doubt Afghan Cow ability to improve the flow of thoughts and increase creativity without feeling burned out.

Afghan Cow is also quite an eye-catching strain to many growers. Its dark green buds are robust with trichomes, alluding to its intense potency, and are densely covered by brown hairs. The plant from which it blooms from also sparkles with a thick coat of resin that make the grow room shine when lighted upon.

Sativa-dominant strains often act rapidly and Afghan Cow is no different. In almost an instant, it delivers a cerebral euphoria that instills a sense of mental clarity. With it is a sense of tranquility that allows one to review problems, work or personal, with calm.

As though a spark of creativity were ignited, thoughts flood the mind in a rapid flourish as it develops into innovative solutions. With a clear head, users will want to sit down and write down the astounding ideas before it dissipates into thin air. Thankfully, the renewed motivation as well as a heightened sense of focus allows one to do just that.

It is also not uncommon to see users smiling from ear to ear during the initial onset. Apart from getting out of a mental rut, the enhanced mood is a byproduct of calming the raging seas from within. But, at the same time, Afghan Cow’s great recreational potential is conveyed through its ability to get users talking, whether about one’s day or vision.

The reinvigorating head high often translates to the body as well. Users feel charged up as the muscles are massaged by a light pressure that trickles down from the temples. If anything, it improves productivity by improving muscle tension.

Afghan Cow makes for a perfect daytime companion. In fact, its best use is right before a grueling day at work or just before a brainstorming session. Users will have to be careful about using it at night though as it can keep one awake for the whole night.

Afghan Cow’s fragrance is enough to lure in most consumers. It is absolutely sweet with a strong overtone of vanilla accentuated by crushed grapes and berries. Meanwhile, a floral and herbal undertone of sage develops into a strange diesel when the buds are combusted.

Drawn in, Afghan Cow melts in the mouth like a dessert. Its smooth smoke envelops the mouth with the delicious taste of fruits such as grapes and berries dipped in vanilla cream. Floral undertones soon permeate as the bud is savored. On the exhale, it leaves a diesel aftertaste.

Afghan Cow has a propensity to make users dizzy when its effects hit. In high doses, this may lead to paranoia as users experience a heightened sensitivity toward one’s sensitivity. Although, usually, it is only limited to a headache. Still, it is important to pace the bud and use it in moderation.

It is not uncommon to feel a little dehydrated when using Afghan Cow. After all, like all strains, its cannabinoids inhibit the production of moisture. The effects are most notable as red eyes and a cottonmouth but both symptoms often go away on its own after a few hours. But, if symptoms persist, staying hydrated will do the trick.

Through the combined effects of its cannabinoids, Afghan Cow provides temporary reprieve for various ailments that plague users day-to-day. In inducing its psychedelic head high, for example, it reduces chronic stress levels.

If left unattended to, chronic stress can lead to the early onset of depression and other mental health issues. Thus, it is important to release stress before it spills over. To this end, Afghan Cow’s cerebral effects soothe the mind and relieves it of overwhelming anxiety. At the same time, it manages turbulent emotions.

The same psychoactive compound, in high levels, produces painkilling qualities that relieve various types of aches and pain beginning from the temples. It also soothes swelling and redness in inflamed areas. Meanwhile, its energizing buzz gets rid of physical fatigue.

It is easy to obtain the means to cultivate Afghan Cow. Seeds are sold online by a number of vendors in feminized form which assures aspiring growers of a full batch of females with calyxes that are filled to the brim with resin.

With that said, Afghan Cow brings out the best qualities from both its Indica and Sativa heritage. It grows tall but is quite resistant to various problems caused by sudden changes in temperature and humidity such as mold or mildew. It is also one that, in spite of its propensity for a warm, Mediterranean climate, will prosper in the cooler weather of the northern hemisphere.

Still, there are many growers that prefer cultivating the strain indoors where factors such as temperature, lighting, and humidity can be easily adjusted. Moreover, such areas offer added protection against pests. However, it may need to be topped early as its lanky structure can grow too tall for its own space. Special techniques such as the Screen of Green method will also help bring out the plant’s full potential.

Afghan Cow, unlike most Sativa-dominant strains, has a short indoor flowering period of 8 to 9 weeks wherein each square meter produces between 16 to 30 ounces of buds. Applying the Screen of Green method helps the plant blossom a week earlier.

In the northern hemisphere, Afghan Cow flowers in October around the second to the last week. Growers usually harvest 23 to 46 ounces of buds per plant.

What is the Afghan Cow strain yield?

How much THC does Afghan Cow have?

What are the origins of the Afghan Cow strain?

Afghan Cow was created from a mix between Ash, Kaya 47 and Kali Mist.

Have you ever smoked or grown your own Afghan Cow? Please let me know what you think about this marijuana strain in the comments below.