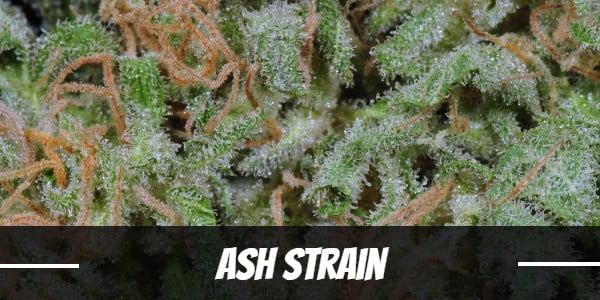 Ash the strain is not at all similar to the word itself. In color, smell, and taste, the plant is something else. In this case, one can say that the original breeder took a deviation from the standard practice of making the names of hybrids meaningful, significant, or symbolic.

Bred by Nevil (formerly of Sensi Seeds) and Shantibaba (Mr. Nice Seeds), Ash features three exquisite lineages – Afghan, Skunk, and Haze. In fact, this strain is also called by an acronym A.S.H. because of its predecessors. Being Indica-dominant, much of its effects are naturally physical. Still, it is also one that delivers a euphoric high.

Its ability to put users in deep relaxation is an influence of the Afghan Skunk, one of the parent strains used to develop Ash. Despite its peculiar fragrance, it has carved a niche since it first made an appearance in the United States before making its way to Amsterdam.

To introduce a bit of Sativa, the breeders chose Afghan Haze. It is not a coincidence that both the parent strains have deep Afghani genetics. After all, it has proven time and again that it is the best pure Indica in the world. Haze, on the other hand, is arguably one of the top Sativa that ever came into existence. Traces of its traits, of course, is evident in Ash.

With up to 20% THC, Ash is not for the weak as it can be overwhelming. However, use it in moderation, and it promises to deliver the ultimate trip from upbeat down to utter relaxation.

Ash is a heavy-hitting mostly Indica strain. However, it is slow-acting. Being a creeper, it may at times lead users to think it is lacking. Give it time to work its magic though.

During the onset, it begins with a gentle euphoria head rush. As the pleasant sensation continues to flood the mind and the body, it ushers in an uplifting feeling that promotes a sense of well-being. Feeling upbeat, most people tend to be cheerful and happy.

]Meanwhile, its Indica traits continue to ebb down to the body. Gradually, it spreads towards the extremities. Feeling pleasant is not the end of it though. Without warning, Ash slams hard with a numbing and almost sedative-like effect that puts users into deep relaxation. It may cause the mind to be foggy with a nearly narcotic-like quality to it. As it continues to intensify, it leaves most people in introspection.

Those who are new to the Ash experience, often, end up surprised to wake up the next day refreshed and reinvigorated without realizing they had fallen asleep.

The scent of Ash is a concoction of Afghani, Haze, and most especially, Skunk. It has a pungent earthy and skunky odor that quickly fills the room. Haze is evident as it also has a flowery note with a woody undertone.

Although less pronounced, its fragrance does carry over. Adding to its exotic taste is a note of berry with a fruity-like quality. Its smoke is thick and flavorful but can be a little bit rough.

Even in moderation, using marijuana can cause dry mouth and eyes. It can also be accompanied by other conditions such as dizziness or having a headache. A few people may even feel anxious especially during the height of its full effects.

As controversial as marijuana are, more states are accepting its use for medical purposes. Although many of the claims are unfounded (in as far as the FDA is concerned), the anecdotal evidence is overwhelming. Keep in mind though that its use is often as a means to seek relief rather than as a treatment.

The exact CBD content of Ash is not known. It is reasonably safe to assume that it should not deviate from most others that comes with 0.01% to 0.1%. It could be a little bit higher but unlikely. Still, it has enough compounds to soothe aching muscles. Indeed, the powerful Indica traits and its numbing buzz can reduce or completely wipe out chronic pains and headaches.

As soon as the mental effects of the strain kick into the mind and followed later by the body high, it already enhances the mood of users. Aside from melting away stress, it can also be put to good use by people with depression.

Ash comes from a premium lineage. While one can think of it as an exquisite strain, there is nothing that suggests as such when it comes to its cultivation. That is because it is both sturdy and forgiving that even beginners should be able to nurture it until harvest. It is quite suitable for different type of medium and most especially hydroponics.

The indoor flowering lasts between 9 to 11 weeks. Using hydroponics, it is possible to shorten this period to as early as eight weeks. Once mature and ready, growers can expect 16 to 21 ounces of buds per square meter.

Because of the Haze genetics, Ash not only grows well in a warm climate but also in a cool environment too. It typically begins flowering in the first or second week of October. Under expert care, each plant can produce at least 20 ounces.

What is the Ash strain yield?

How much THC does Ash have?

What are the origins of the Ash strain?

Ash was created from a mix between Afghan Haze and Afghan Skunk.

Have you ever smoked or grown your own Ash? Please let me know what you think about this marijuana strain in the comments below.