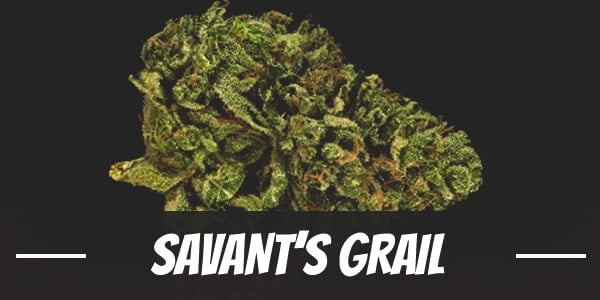 Savant’s Grail is among the most sought-after strains from 710 Savant’s line of products. Hence, the exemplary title of ‘grail.’ It is impressively potent with THC levels usually averaging between 22% and 24%. A puff of its delicious smoke is enough to send users on a soaring adventure.

Much of the Michigan native’s excellent effects are traits passed on by its parents. Sadly, due to breeder secrecy, their identities remain a mystery. Still, it has not hindered Savant’s Grail from winning awards. Most recently, it took home the Silver Medal for Best Hybrid during the 2015 Cannabis Cup held in Michigan.

Though undoubtedly a thrill seeker’s favorite, beginners and medical users can still enjoy the strain through pacing or the help of a seasoned friend.

Because of its potent levels of THC, Savant’s Grail is fast-acting and hard-hitting. Almost immediately after the first puff, a tingling sensation rushes from the temples to the rest of the body. It is marked by a rush of euphoria that swarms the mind until it is cleared of cobwebs.

At this point of the psychedelic high, it is not uncommon for the mental clarity to result in productivity. After all, it does free the mind of distracting thoughts. With a heightened sense of focus, users finish tasks quicker and more innovatively.

After about an hour or two, the uplifting buzz will have enveloped the body in full. The relaxing Indica high usually increases one’s motivation, and even drive, to finish work. However, there are some who find the freedom from mental and physical inhibition totally arousing.

A natural aphrodisiac, Savant’s Grail is a great bedtime companion for couples looking to chill before a night of fun. However, users can still take advantage of the strain’s wake-and-bake qualities by using it late in the afternoon or early evening.

Savant’s Grail has a pungent floral scent with undertones of wet soil that make it seem freshly picked. Broken apart or combusted, a woody but refreshing pine entices the senses.

A strain’s full terpene profile can only be distinguished once it is drawn in. The earthy undertones of Savant’s Grail, for example, are much more notable in the palate along with the taste of flora. On the exhale, a subtle candied sweetness accentuated by the woody taste of pine washes over the mouth.

Moisture-inhibiting cannabinoids usually lead to a cottonmouth and red eyes regardless of the strain. Luckily, both reactions are mild and barely noticeable in spite of their inevitability. As such, it is best to have a drink while using Savant’s Grail. Not alcohol though as it does not pair well with marijuana. Strong cups of caffeine, like espresso, are also out of the question as it can exacerbate the problem.

710 Savant distinguishes itself as an ‘Alternative and Holistic Health Service.’ Thus, it comes as no surprise that its Silver Medalist Savant’s Grail provides comfort to patients with mental and physical conditions.

The happy high that Savant’s Grail induces helps manage stress and symptoms of mental illnesses like depression. By enhancing the mood, it stabilizes turbulent emotions and calms the overwhelming dread that comes with anxiety. The heightened focus also helps patients with ADD or ADHD concentrate on tasks.

In high levels, THC turns into a natural painkiller. It soothes away various aches in the body including the sharp sting caused by spasms. At the same time, the subtle relaxation energizes the body so users can move with ease.

A perfectly split hybrid, Savant’s Grail exhibits both Indica and Sativa traits. It grows tall but its stalks are not at all thin. They are thick, sturdy, and can withstand various problems like moisture in the air and changes in temperature.

Still, many commercial breeders prefer growing their strain indoors for added protection against pests and other unpredictable factors. In such controlled environments, growers can easily adjust lighting, temperature, and humidity to bring out the plant’s full potential.

Grown indoors, Savant’s Grail necessitates pruning and trimming. Doing so will cut away dead parts of the plant so light and air can circulate better. This will also ensure nutrients travel to healthier budding sites. Using soil as a medium will enhance flavors. Hydroponics, however, will produce ‘cleaner’ buds.

Savant’s Grail may sometimes produce an Indica-leaning phenotype. Nonetheless, it produces the same lumpy green bud coated with resin and tapers on one end. After all, 710 Savant are experts in the field of concentrates.

Following the vegetative stage is a blossoming phase lasting for about 8 to 10 weeks. Once mature, Savant’s Grail produces between 12 to 14 ounces of buds per square meter. However, it flowers quicker and yields higher under the expert care of a seasoned grower.

In the northern hemisphere, Savant’s Grail flowers around the first to the last week of October. Thriving under the sun, it yields at least 14 ounces of buds per plant.

Have you ever smoked or grown your own Savant’s Grail? Please let me know what you think about this marijuana strain in the comments below.