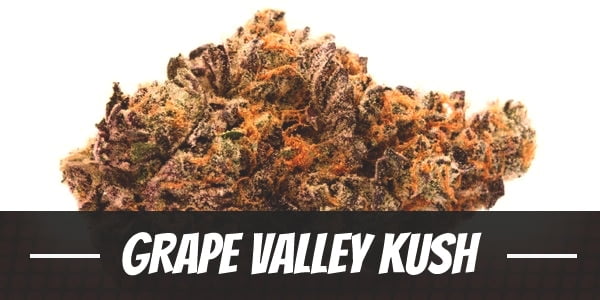 Moxie Seeds earned the respect of its peers when it began breeding solely using extractions, a feat only achieved by the Los Angeles company. Not only that, their strains and extracts remain a staple throughout the industry for their resinous buds and high cannabinoid content. One of which is Grape Valley Kush.

Grape Valley Kush is an Indica-dominant strain with debilitating levels of THC. Each puff of its grape flavored smoke opens the mind and calms the senses until a drowsiness eventually sets in. Not immediately, of course. It typically takes a few hours so users can bask in relaxation.

A cross of SFV OG and Grape Kush, such effects are only expected of the California classic. The former lent its astonishing cerebral effects and therapeutic benefits. The latter, meanwhile, influenced its undertones of sweet grapes as well as the powerful Indica high.

Grape Valley Kush is a powerhouse with THC levels from 15% to 18% with some reaching up to 26%. Yet, in spite of its devastating potency, it remains a slow-starter with a barely noticeable onset overshadowed by its full terpene profile. But, those who deliberately take note of the effects do notice a subtle euphoric rush that spreads to even the deepest recesses of the mind.

With each puff, the feelings of happiness intensify until users are in a state of bliss. Some may even find themselves remembering joyful memories and opening up more. As such, one of the best times to use Grape Valley Kush is right before a small social gathering.

After about an hour or two, a light pressure begins to drip down from between the eyes. It soothes the muscles until the body is fully enveloped in relaxation. In all likelihood, users will remain productive due to the initial mental onset or find themselves lounging in their couches. However, the pleasant Indica effects may end if one were to use the strain excessively.

Grape Valley Kush smells like a basket of grapes, berries, and even citrus. Its undertones of wet soil make the bud seem freshly picked. Blending with the rest of the fragrances is a faint note of pine, evident only once the bud is broken apart or combusted.

Drawn in, Grape Valley Kush bursts with the zesty overtones of grape and berries. Its sweetness is complemented by a refreshing note of pine with a subtle hint of citrus. On the exhale, the thick smoke leaves a rich earthy aftertaste.

Dehydration is an unavoidable reaction to marijuana. It is often reflected in the eyes and the once especially once the moisture-inhibiting cannabinoids begin to interfere with the production of saliva. Though unavoidable, both are barely noticeable effects that usually go away with time. If symptoms persist, users may down a few glasses of water.

Grape Valley Kush can bring about dizziness too especially when too much of the strain is used in a short amount of time. As such, marijuana should always be used in moderation.

Moxie Seeds specializes in creating medical cannabis. As such, it comes as no surprise that Grape Valley Kush comes with therapeutic benefits. Its THC, CBD, and other cannabinoids provide a reprieve against a plethora of mental and physical conditions.

Its cerebral high, though subtle, is enough to enhance moods and stabilize emotions. By doing so, it provides comfort to users with anxiety, depression, and other mental illnesses like PTSD. At the same time, it acts as a stress reliever by calming the mind of overwhelming dread.

The same stimulating compound also encourages a hearty appetite. By relaxing the stomach, it gets rid of any sharp sting keeping users from enjoying a meal. The soothing buzz also eases away various aches and pains all over the body. Eventually, the pronounced physical effects lead to a deep, unencumbered sleep.

Grape Valley Kush is not a tall plant but yields vigorously. Its nodes are perfectly spaced with multiple healthy budding sites in each branch, which are brought to its fullest potential when paired with the Sea of Green method. Moreover, it has an impressively sturdy structure that can be attributed to its predominantly Indica genes.

Valley Ghash is reminiscent of summer nights spent at camp. Its effects are euphoric and promote a sense of camaraderie when smoked with friends and peers.

With that said, Grape Valley Kush is a relatively easy plant to grow with little to no problems while being cultivated outdoors. After all, its thick branches and stalks can withstand the unpredictability of weather, moisture, and wind. Still, many prefer growing their batch in controlled environments due to its medical and commercial nature. In this way, factors like temperature, humidity, and lighting can easily be adjusted.

Lowering humidity levels during the flowering phase will keep Grape Valley Kush buds from being affected by mold and mildew. Meanwhile, exposing it to colder temperatures will bring out its stunning colors. Since seeds only come in regular form, growers will have to apply Low-Stress Training to keep successful female plants from turning into hermaphrodites.

Grape Valley Kush has an average flowering period of 8 to 9 weeks. Although, depending on the skill of the grower, it can blossom as early as 7 weeks. Regardless, each strain will produce up to 16 ounces of buds per square meter.

Garden grown Grape Valley Kush blossoms from the last week of September to the second or third week of October. It produces at least 16 ounces worth of cured buds per plant.

Have you ever smoked or grown your own Grape Valley Kush? Please let me know what you think about this marijuana strain in the comments below.