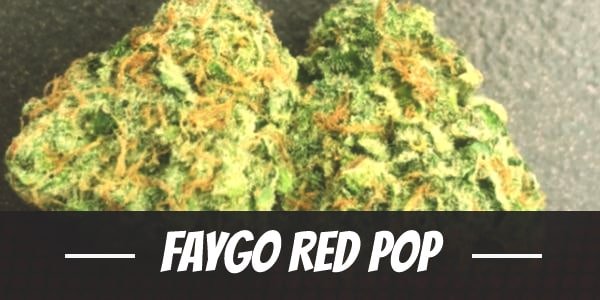 Red Pop is a cream soda product developed by Michigan-based Faygo that is distinguished by its delicious blend of apples, cherries, and strawberries. Not only that, it is a timeless classic that continues to be a part of residents’ homes even before the 1960s. Years after its release, its popularity remains so vast that a breeder even paid tribute to it.

Faygo Red Pop embodies all the appeal of its namesake. Its buds are rose-colored, similar to the striking red cans of the carbonated drink, while its sought-after smoke is sweet with overtones of berries and strawberries.

Developed by 710 Savant, the Indica-leaning strain is a cross between Afghani and an unknown strain. The former influenced its stress-crushing body buz When untrained, it grows like a Christmas tree and yields far less. For this reason, one may want to prune and bend their crop. When blooming, it gives off large rosy calyxes. Its buds are big and may need support during the final weeks of flowering.
z. While there is no information on the latter, there are many who believe it is a fruity landrace Sativa like Thai. Nonetheless, Faygo Red Pop lives up to its reputation. It won 1st place during the 2015 High Times Michigan Cannabis Cup in the category ‘Live Resin.’

By today’s standards, Faygo Red Pop is quite mild. Its THC levels range from 13% to 17% yet its strength gives it the versatility to meet the needs of veterans and novices alike. Moreover, its buildable high is a great companion for a night of relaxation or a lazy day.

Faygo Red Pop is not one to overwhelm. Instead, it creeps in slowly beginning with a subtle rush of euphoria in the mind. It intensifies with each puff and inspires a sense of happiness from within. Some even find themselves smiling and giggling out of nowhere or for the most minute reasons.

In time, a light pressure ebbs down from the temples and down to the rest of the body. It is soothing and uplifting to the muscles. In all likelihood, users will find themselves lounging in their couches basking in complete relaxation. Too much, however, can undo the positive effects of the bud and even stun users in place.

True to its heritage, Faygo Red Pop smells like a basket of sweet fruit with a note of damp earth. Broken apart or combusted, an alluring aroma of fresh berries and strawberries fills the room.

Faygo Red Pop’s smoke is pleasantly sweet and spicy. Enhancing it is a subtle hint of fruit from both its strawberry and berry undertones. On the exhale, an earthy aftertaste lingers in the mouth.

Marijuana use always brings about a case of cottonmouth regardless of the amount of buds consumed. To some degree, it can also lead to dry the eyes and cause them to redden especially once cannabinoids begin to interfere with the production of moisture in the tear ducts. Neither are a cause for concern though as they are often mild and usually go away with time. Be that as it may, users may down a few glasses of water throughout the session to stay hydrated.

At times, Faygo Red Pop can trigger a condition called ‘greening out.’ Its symptoms include a subtle headache and heightened levels of anxiety. Thankfully, this is a rare occurrence brought about only through overconsumption. For this reason, marijuana must always be used with caution.

Whether right or wrong, much of the general public’s opinion on marijuana use is that it is a form of ‘recreational pastime.’ Still, this does not mean strains like Faygo Red Pop carry no therapeutic value. Far from it, it provides a reprieve against a plethora of health conditions through the combined efforts of its THC, CBD, and other cannabinoids.

For example, the mood-enhancing high it induces is powerful enough to reduce stress levels. It calms the mind and gets rid of dreadful thoughts that heavily affect one’s outlook in life. At the same time, it provides comfort to users going through anxiety, depression, and other mental health conditions like PTSD by stabilizing emotions.

The same chemical compound also stimulates the appetite. As such, one of the best times to consume Faygo Red Pop is an hour or so before a meal. In this way, users can eat to their heart’s desire which is perfect for patients with eating disorders.

As an Indica-leaning strain, Faygo Red Pop’s best feature is its body high. It relaxes users by easing muscular tension beginning from the temples. In effect, it also combats sleeping problems that are usually present with various mental and physical afflictions.

Faygo Red Pop inherited the sturdiness of its Afghani parent. Thus, it comes as no surprise that the plant thrives regardless of its set-up. It can withstand strong gusts of wind and sudden changes in weather. It also has strong resistance against problems caused by high levels of moisture in the air including mold, mildew, and bud rot.

In spite of its great performance outdoors, there are still many who prefer cultivating their batch in less volatile environments such as greenhouses. In such controlled environments, growers can optionally adjust factors like lighting temperature, and humidity depending on the plant’s current phase.

While its height is manageable, its bushy structure requires constant pruning. Apart from aesthetic reasons, the practice of cutting away dead parts of a plant encourages better yields and proper nutrient distribution. Meanwhile, a growing method like the Sea of Green maximizes the amount of buds produced per square meter.

Faygo Red Pop has an indoor flowering period of 7 to 9 weeks. Each square meter can yield 10 to 12 ounces of buds.

Garden grown Faygo Red Pop flowers between the last week of September to the second or third week of October. Once mature, it yields at least 12 ounces of buds per plant.

Have you ever smoked or grown your own Faygo Red Pop? Please let me know what you think about this marijuana strain in the comments below.