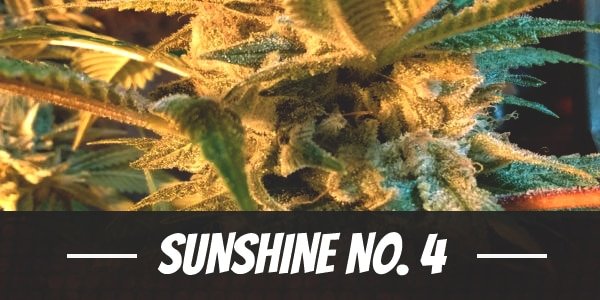 Like a ray of golden sunlight, Sunshine No.4 easily brightens anybody’s day. A single hit of its smoke adds ‘sunshine’ to an otherwise cloudy day. As it stimulates the mind, users become lively with conversation. But, it is not only recreational enthusiasts that benefit from its cerebral effects. Medical users too find delight in its soothing body buzz.

Information about Sunshine No. 4:

Nothing short is expected from Bodhi Seeds though. It is their consistent use of fine genetics that makes them one of the most sought-after breeders in the cannabis industry. Their premium catalogue remains unmatched.

In creating Sunshine No.4, for example, they used Chemdawg 4. A topnotch strain with fast-acting effects, its stimulating cerebral high begins in less than 5 minutes after the first hit. To keep its height manageable, it was crossed with Sunshine Daydream. The Indica-dominant hybrid also increased its offspring’s therapeutic value.

A true masterpiece, Sunshine No.4 made great strides in the cannabis industry by winning the gold medal for Best Hybrid Flower at the 2015 High Times Medical Cup in Michigan.

Information about Sunshine No. 4:

As expected of a Bodhi Seeds product, Sunshine No.4 is impressive. It boasts stable THC levels of 25% to 26% and delivers a well-balanced high because of its evenly split genetics. Its initial onset begins with a pronounced Sativa kick marked by sense of euphoria rushing through the mind.

TIP: Looking to buy Sunshine No. 4 seeds? Check out this marijuana seed shop

The behavioral change is immediately noticeable. Moods are lighter and users seems happier. Some even find themselves opening up more than usual especially as the uplifting buzz brings back joyful memories, making Sunshine No.4 a wonderful party strain.

As time goes by, soothing waves of relaxation trickle down from the temples and throughout the rest of the body. It loosens any tightness in the muscles while freeing away tension. In this way, users can move freely like a well-oiled machine.

Sunshine No.4 has a pungent diesel-like fragrance accompanied by a chemical scent. If anything, it is much like aerosol especially as the scent of freshly picked lemons oozes from the combusted bud.

Sunshine No.4’s flavor resembles its citric aroma in that it is a bit tangy like lemon. Drawn in, its subtle notes of orange flood the palate. On the exhale, it leaves a diesel aftertaste in the mouth.

The most common side effect of toking marijuana is dehydration. It is reflected in the eyes and in the mouth as cannabinoids begin to inhibit the production of moisture. These slight setbacks are barely noticeable and easily mitigated by drinking water. Although, they usually go away on their own with time.

Though rare, users of Sunshine No.4 sometimes experience anxiety and paranoia. This is usually result of overindulging in the strain although one’s disposition before the first hit play a role as well. As such, it is important to consume marijuana in moderation.

Sunshine No.4 works well as a recreational strain. However, as a medical hybrid, through the combined efforts of its psychoactive compounds, it retains enough therapeutic value to be of use among people of the medical marijuana community.

TIP: Looking to buy Sunshine No. 4 seeds? Check out this marijuana seed shop

Its mood-enhancing high clears the mind and busts away stress. At the same time, it provides comfort to users dealing with depression and other mental illnesses like PTSD. Albeit on a temporary basis, it manages the crippling anxiety that often affects their ability to live normal lives.

On the physical aspect, Sunshine No.4’s soothing high reduces inflammation which usually leads to spasms. By reducing the swelling and relaxing the body, it keeps muscles from suddenly contracting and causing any sharp stinging pain.

At the moment, Bodhi Seeds has only made Sunshine No.4 available in its regular form. For this reason, aspiring growers must increase the chances of producing a calyx-filled plant through pre-germination methods like soaking. Low-Stress Training will keep successful females from becoming hermaphrodites. Otherwise, at least half of the batch will turn into males.

Because of its balanced Indica and Sativa ratio, Sunshine No.4 grows tall but is quite manageable. Its stalks are sturdy and not at all thin. As a result, it has built up resistance against high levels of moisture in the air as well as sudden changes in weather. Meanwhile, its equally hardy branches do not break off even as gusts of strong winds come one after another.

As its name implies, Sunshine No.4 likes tons of sunshine. For this reason, many commercial breeders and home growers living in the northern hemisphere prefer cultivating their strain in controlled environments. In this way, they can easily adjust factors like humidity, temperature, and lighting to mimic a warmer climate with longer day hours. As for mediums, using soil will bring out its full flavors. Once mature, it yields minty green buds with lots of orange hairs and trichomes.

Like most hybrids, it takes Sunshine No.4 8 to 10 weeks to fully bloom. It yields 12 to 14 ounces of cured buds per square meter. Applying either the Sea or Screen of Green method will help the plant flower faster, produce higher yields, and even save space.

In the northern hemisphere, garden grown Sunshine No.4 bears flowers around October. Once mature, it yields at least 14 ounces of buds per plant.

Have you ever smoked or grown your own Sunshine No. 4? Please let me know what you think about this marijuana strain in the comments below.

0 comments on “Sunshine No. 4 Strain”