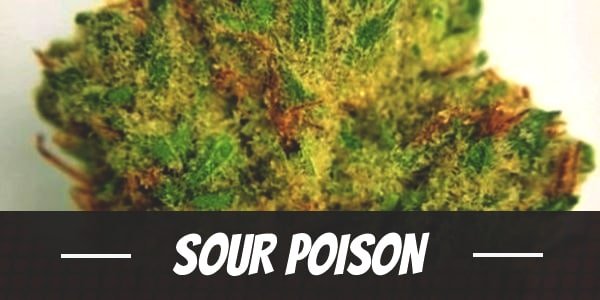 In spite of its name, Sour Poison is neither sour nor poisonous. In fact, it is actually quite sweet and is far from deadly. Not only that, it induces a psychedelic high that invigorates the mind and relaxes the body.

It was not difficult to create such an excellent. From a wide array of premium strain, breeders took ahold of Durban Poison, a pure Sativa from Africa. Besides its energizing high, it is known for being a top choice among extract enthusiasts. To increase its medical value, Sour Diesel was added. Its potent cerebral high provides a reprieve against certain mental conditions like stress and depression.

With THC levels of up to 22%, Sour Poison packs quite the punch when used as a party strain. However, its high THC levels go beyond the recreational. After all, the same psychoactive compounds also alleviate a variety of afflictions.

Sour Poison is not only potent, it is also fast-acting. A single puff of its berry-tasting smoke is enough to deliver an energizing high throughout the body. Its initial onset, though, is largely cerebral.

With each toke, the euphoric rush intensifies and leaves users beaming with happiness. Some may even find it difficult to keep themselves from becoming a little too chatty. In the company of friends, peers, or fellow weed smokers, the bud paves way for enlightened and joyful conversations that promote camaraderie.

In time, a soothing sensation engulfs the user. As tensions leave the body, an uplifting buzz takes its place. Used within the limits of one’s tolerance, it allows users to move around freely and without restriction. In excess, however, the bud has the potential to lock people on the couch.

Anybody may revel in the strain impressive Sativa effects, given that they don’t overindulge. One may even say that it’s the perfect smoke for rookies who want to try their hand at stronger strains.

Pungency is a common trait shared among highly potent strains, including Sour Poison. In fact, simply taking it out of its amber container fills the room with the delicious sweetness of grape and undertones of pine. Once broken up and combusted, the buds release a blend of damp earth and diesel.

Sour Poison’s smoke is reminiscent of grapes and berries. Drawn in, zesty flavors of citrus with refreshing notes of pine burst in the palate. On the exhale, it leaves a diesel aftertaste in the mouth.

Cannabinoids in marijuana often interfere with the production of saliva. As such, it is not surprising to find oneself feeling a little dry in the mouth and the throat. Some may also experience some redness in the eyes. Regardless, both are usually minor setbacks especially at the height of the high.

Chronic stress dangerously affects health. It can make one feel constantly agitated and encourage self-destructive thoughts, which leads to anxiety and depression easily taking over the mind. And, in dangerously high levels, it can send one straight to the emergency room. As such, it is important to find release every now and then.

Used moderately, Sour Poison can fight against stress. Its THC and CBD components fill in the missing chemical compounds of the endocannabinoid system, essentially stabilizing the mood and enhancing it. For this reason, it can also alleviate symptoms of depression and other mental conditions like PTSD and anxiety.

The same psychoactive compounds also stimulate the appetite, especially in patients with eating disorders. THC, being a natural painkiller, soothes the sharp pangs in the stomach that often keep one from munching on a deliciously satisfying meal. Similarly, it can ease the sudden muscle contraction that causes nausea.

Sour Poison appeals to growers who do not mind delayed gratification. After all, the strain takes its sweet time when it comes to blossoming. The wait is well worth it, however, especially at the sight of its huge resinous buds.

Perfectly influenced by Durban Poison’s genes, each nug is chunky yet tapered on one end. Once mature, the buds turn into a forest green color with olive undertones. Sparsely covering it are burnt orange hairs and a layer of sparkling trichomes.

A tall plant, Sour Diesel necessitates early topping and constant height management. Besides encouraging lateral branching, it helps aerate plants and spread nutrients. People who are also looking to be discreet will have to install odor-control systems as the strain’s potency makes it very pungent.

At this time, though, seeds from the original breeder have not been made available.

It typically takes Sour Poison between 9 and 11 weeks for each square meter to flower at least 12 ounces of buds. However, growers may apply the Screen of Green method to hasten the blossoming period and encourage even higher yields.

When cultivated outdoors in a warm climate, Sour Poison should flower by mid to late October. In the hands of an expert grower, it can produce more than 16 ounces of buds per plant.

Have you ever smoked or grown your own Sour Poison? Please let me know what you think about this marijuana strain in the comments below.