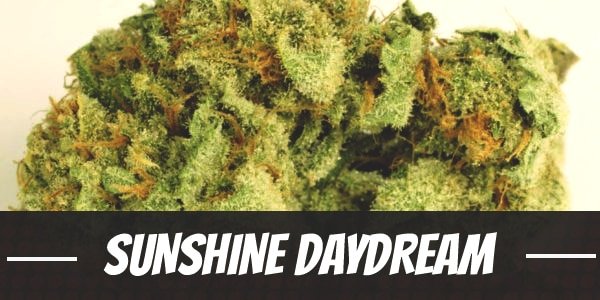 In the last decades, there have been more than a few musicians associated with cannabis. Not that any of them were cultivating or selling weed. But because they do use marijuana, some breeders have taken to naming some hybrids after them. For instance, Bodhi Seeds named a strain they developed after a music documentary, Sunshine Daydream, featuring the Grateful Dead back in the 70s.

To develop this hybrid, the breeder selected a male Appalachia as one of the parent strains. A descendant of Green Crack and Tres Dawg, this hybrid boast of a dreamy cerebral high followed by a full-body relaxation.

For the female plant, the breeder used a hybrid they previously developed Bubbashine (Bubba Kush x Blue Moonshine), a heavy-hitting Indica strain that can induce a heavy couch-lock after delivering its sedating physical effects.

Possessing an average of 19% THC, Sunshine Daydream is a very potent strain. A few tokes and it takes users to a blissful high before leaving users in deep relaxation. Not only is it an excellent hybrid for recreational use, but it is also a highly sought after medical cannabis.

As mentioned, Sunshine Daydream is a very potent cannabis hybrid. Even so, its effects are not evident during the onset. It takes a few minutes before users feel a prickling and tingling sensation in the head. Gradually, this reinvigorating buzz trickles down to the body.

The strain does not induce an intense cerebral buzz. Instead, the mental high is more subdued with a dreamy quality. Once tension starts leaving the body, an uplifting sensation takes over. It does not take long before users start feeling cheerful.

Almost without warning, the heavy-hitting sedating effects of Sunshine Daydream comes kicking in. When it does, the deep relaxation it induces cause laziness to set in. Use a little too much of the strain, and it then leaves users locked on their couch or bed.

Sunshine Daydream is not a shy strain at all. As soon as users open its container, the pungent and dank odor of fuel with a fruity note of berry fills up the room in no time at all. After breaking the bud, the earthy and skunky undertone is a reminder of its OG and Skunk lineage.

Despite the promises of the ultimate relaxation, users will have to endure its harsh smoke. Some of its fragrance carries over to its taste, and fortunately, a lingering sweet aftertaste makes the experience more tolerable. Still, some people may find themselves coughing.

Considering how the smoke of Sunshine Daydream is harsh, it suggests that the strain may come with severe adverse reactions. In reality, the conditions that arise as a result of using cannabis are often very mild. Used in moderation, users can expect to have dry mouth and to a much lesser degree, dry eyes.

In some instances, some people may experience a mild headache or feel dizzy. There are also instances when the strain can also cause anxiousness.

Because it takes a while before users feel the effects of Sunshine Daydream, there is a tendency for some people to underestimate its potency. In other words, those who do and end up taking more tokes are likely to experience these adverse reactions.

Compared to many other strains, the CBD content of Sunshine Daydream is a little on the high side. It is, by no means, anywhere close to the level needed for it to be used as a treatment for diseases that respond to CBD. The anti-inflammatory properties as well as its sedating effects, though, can help people deal with inflammation and muscles spasms. It is an excellent pain reliever for people suffering from chronic illnesses.

Because users end up with a blissful relaxation, it goes without saying that the strain melts away stress. In this regard, Sunshine Daydream benefits people with depression and similar or related issues find comfort.

Before the effects of the strain leave the body, the chances are high that users fall asleep. As such, it helps patients rest and insomniacs visit dreamland.

Like typical Indica plants, Sunshine Daydream does not grow tall and tends to be bushy with a lot of lateral branching. It thrives indoors or outdoors.

Sunshine can brighten the day. Like its namesake, it brings a ray of hope on an otherwise gloomy day. And, it is not only recreational users who benefit from its optimistic high. Read our full review!

One thing that growers can do before flowering is to expose the plant to some 10 degrees lower temperature to induce purple hues on its leaves and buds. Not that it has a bearing on its potency or yield, but it certainly makes it look much more beautiful.

Due to its pungent odor, growers will want to install a carbon-activated filter in the indoor habitat to eliminate the smell. It should be ready for flowering in 8 to 9 weeks. Under 600 watts of lighting, the estimated yield is 10 to 12 ounces per square meter.

Sunshine Daydream loves a semi-humid environment. Under normal conditions, it should start transitioning to bloom stage in the first two weeks of October. Once it reaches maturity, growers can expect to pick up at least 12 ounces of buds each plant.

Have you ever smoked or grown your own Sunshine Daydream? Please let me know what you think about this marijuana strain in the comments below.