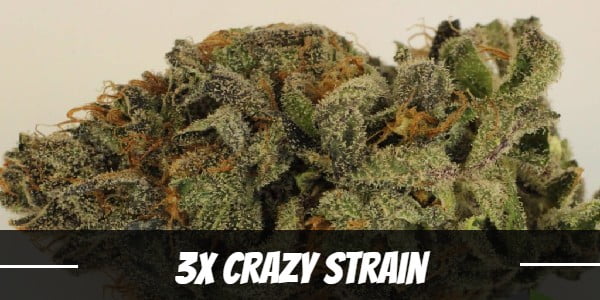 3X Crazy sounds like an ominous name for a cannabis strain. Even if it is sometimes referred to as Optimus Prime, the leader of the Autobots is a friend to mankind. To be clear, the two strains are not related at all.

Indeed, there is a strain called Optimus Prime bred by Exotic Genetix. It is a cross between Purple Diesel and Starfighter. On the contrary, no one knows who the original breeder of 3X Crazy is or where it came from exactly. One thing that is clear is that it is a three-way cross between OG Kush, Bubba Kush, and Granddaddy Purple. As one can see, from genetic lineage alone, it is erroneous to infer that both strains are the same.

At any rate, 3X Crazy did come from a prominent line of strains. OG Kush, as everyone knows, has been around for ages. It is also notable for its ability to melt away stress.

As potent as OG Kush is, it is nothing compared to Bubba Kush. It does not only handle stress the way OG Kush can; it does so with its sedating traits that often leaves users in a couch-lock.

As a result of crossing the three strains mentioned above, 3X Crazy came to be. Its name aptly refers to its parent strains and letting loose with its use.

Imagine what it is like when a breeder takes the best of three prominent strains. If one is to only think of its name, it is as if the strain can deliver the effects of the three parent strains in one go. That is crazy, though. Instead, one can think of 3X Crazy as being the average, and that is not to say that it is any less potent.

It also takes a while before users feel the effects of 3X Crazy. Once it does, it almost always begins with a slight pressure at the forehead. Then, there is a gradual increase in the intensity of the cerebral high that it induces.

Early on, most people should feel their head clearing. It is also likely to be followed by free thinking as well as having a sharper focus. Hence, instead of a speedy high in which random thoughts pop in and out, most people are able to stay productive. Another thing that the strain does is to uplift the spirit and bring happiness to the users.

With its relaxing and uplifting high, Pure Indica is another cannabis strain you can try when you want a mood boost and to calm down after a stressful day.

After a while, there may be a tingling sensation from the back of the neck and down the spine. At this moment, the physical effects creep down to the body inducing deep relaxation. This ebbing sensation is soothing to the muscles, but it can also cause a little bit of disorientation. If one uses too much, then it can also lead to a couch-lock.

Due to its Diesel heritage, one may detect a note of fuel blending in with its sweet and peppery scent with a note of grape. This exotic aroma, no doubt, should please anyone who comes close to smelling it.

Upon combustion, the strain releases a mild hint of skunk. It has a sweet and spicy taste that helps make it smooth and easy on the throat as well as the lungs. Best of all, it has the almost fruity taste of berry and grape.

3X Crazy is one of my go-to strains whenever I need a mood booster while trying to be productive, and then relax later on. While we don’t have this strain yet, you’ll find other Indica- dominant seeds in our seed bank.

Besides the usual dry mouth and eyes, there are also other conditions associated with the use of 3X Crazy. Some people may feel dizzy while others may experience mild paranoia.

In general, any of these adverse effects, should they occur, are often mild. However, it really depends on conditioning as well as how much was used.

Despite not having much of CBD to boast of, it is the psychoactive properties of the strain that has the most benefit to medical cannabis users.

Among its most notable use is in squashing stress. That is never in question especially when one looks back at its OG lineage. By uplifting and inducing a euphoric head high, even those with depression should find comfort. No longer do they have to struggle with their emotional issues as this is replaced by elation.

Another benefit of 3X Crazy is in pain relief. People with chronic illnesses often have to endure a certain degree of physical discomfort. The heavy-hitting Indica properties of the strain take care of that.

Depending on how much one uses, either a user can stand and find food or simply go on to sleep. 3X Crazy stimulates the appetite, but it also makes people drowsy. Experienced users of this strain should have no trouble balancing between the two.

Unfortunately, 3X Crazy is not available in seed form. As such, the only way to cultivate it is to obtain a clipping. At any rate, it appears to tilt towards the Indica side. The chances are that it thrives in both the indoor and outdoor environment.

The estimated flowering time indoor is between 7 to 9 weeks. Each square meter will likely have a yield of 10 to 12 ounces of buds.

3X Crazy should transition to the next phase at the end of September. Once mature, each plant can produce at least 12 ounces of buds.

When your plants are trying to form buds, they should be full, lush and green; otherwise, you might risk the quality of your harvest. For the best results, start with buying the best seeds from our seed bank.

What is the 3X Crazy strain yield?

How much THC does 3X Crazy have?

What are the origins of the 3X Crazy strain?

3X Crazy was created from a mix between OG Kush, Bubba Kush, and Granddaddy Purple.

Growing marijuana takes practice and learning. Read our blog and grow like a pro in no time!

Have you ever smoked or grown your own 3X Crazy? Please let me know your favorite strain to grow in the comments below.