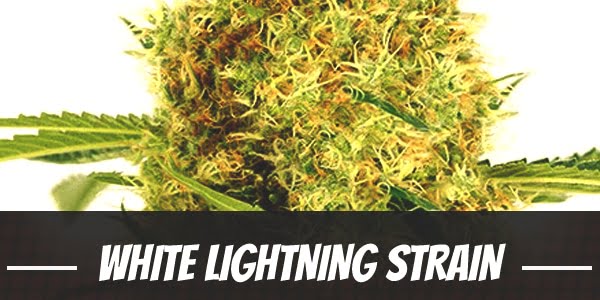 Cannabis is unique when it comes to treatment by growers. Who cares about genetics except that it grows, that is the general attitude towards crops. But not so for marijuana as everything is considered. For instance, the choice of using which strain to create a hybrid is not only about picking the strain. It is also about using the right phenotype.

White Lightning may sound suggestive of what is to come with its use. Before getting into more details, let us take a look at where it came from.

British Columbia Seed Company made a safe bet by using two of the most influential strains of all time. These are not only classic but also legendary in stature.

For over twenty years, the White Widow has graced the coffee shops in Amsterdam. Originally bred by Green House Seeds, it traces its genetic lineage to South Indian and Brazilian landrace pure strains. It is notable for its energizing and euphoric buzz.

Meanwhile, another strain is a phenotype of Northern Lights. In particular, No. 5 balances the cerebral effects with its intense body high. Since 1989, it has won numerous awards including the High Time Cannabis Cup, several times.

With such prestigious parents, there is a lot of expectations for the White Lightning. Can it rise up to the challenge?

White Lightning generates an electric buzz that surges into the head moments after using it. In no time at all, users feel uplifted and generally happy about themselves. Such positive feeling is accompanied by a heightened sense of focus. As the effects continue to intensify, most people find themselves starting to feel euphoric. At the same time, the buzzing effects may cause some to feel a little hazy.

Using this cannabis with friends, it is not surprising for everyone in the group to be talkative. Expect a lot of laughter, even. However, this is soon followed by a relaxing sensation washing down to the body. In a sense, this is a good thing as the cerebral effects settle down before it becomes too overwhelming.

From somewhere in its genetics, evidence of Skunk is apparent as its odor accompanies the sweet and earthy scent. It is also influenced by a note of fruit and lavender. The contrast within makes for a pleasant aroma that sets the tone for a relaxing experience.

White Lightning has a less pronounced flavor, contrary to what one may expect after smelling its buds. But a note of berry accompanying its sweet and fruity flavor makes it a treat that some people may be tempted to use a tad bit more just because of how it tastes.

Possessing an insane THC of up to 24%, the White Lightning is not a strain to fool around with. In other words, users are better off using a small amount rather than overindulging.

Once that happens, a few things may occur. Users are likely to experience dry mouth and eyes. For most cannabis users, the regular ones, it is not a big deal as such effects are a given. But for beginners, it can be annoying.

During the onset of the cerebral effects, it is possible that some people may feel a little dizzy. On rare occasions, some may also feel a bit more anxious or paranoid.

As a general rule, the more people use, then the more pronounced these adverse reactions are, too.

For the medical cannabis users, the White Lightning is known for one particular benefit. It is very effective in zapping stress. After seeing how it delivers an intense head high, it is not hard to understand how useful it is in giving users a temporary break from the troubles of the world. Furthermore, its mood-enhancing properties can help people suffering from depression.

Physically, the White Lightning is not as efficient as others in providing pain-relief. It does that too, but only for mild cases of chronic pains and aches.

Depending on individual physiology, some people may also feel drowsy as the effects of the strain fade. In this way, it helps users get quality sleep. If one does not feel hungry afterward, then they can expect to have a healthy appetite the following day after waking up.

While it is easy to think of its name with regards to its potency, the lightning label is actually from the thick crystals covering the buds. It grows in both the outdoor and indoor environment well, and even beginners should be able to successfully cultivate the plant. Of course, having past experiences in growing plants helps a lot as it needs a little bit of tending to.

Most growers plant cannabis in the privacy of their homes. The best way to grow it is to use hydroponics and combine it with the Sea of Green training method.

In only eight weeks, growers can start the flowering phase. As an option, they may want to extend it for one or two weeks to give it time to strengthen its stems and branches. During harvest, each square meter of the White Lightning yields 14 to 18 ounces of buds.

In the garden, this plant generally transitions to the next stage before the start of October. It will not be long after before the crystalline buds form. Each plant can produce at least 18 ounces to the delight of the growers.

FAQ About the White Lightning Strain

What is the White Lightning strain yield?

How much THC does White Lightning have?

What are the origins of the White Lightning strain?

White Widow and Northern Lights No. 5

Have you ever smoked or grown your own White Lightning? Please let me know what you think about this marijuana strain in the comments below.