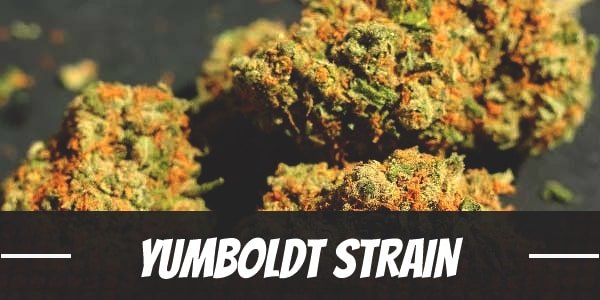 As strange as its name sounds, there is a history behind it. Yumboldt (also spelled as Yumbolt) has traveled from one continent to another before making its way into the mainstream markets. Still, this is not an easy strain to find. As such, once it is available, it does not take long before it is sold out and for a good reason.

The strain is known for its heavy-hitting Indica effects. Hence, users can expect to experience the ultimate relaxation with its use.

Most sources cite its genetic lineage as originating from two landrace strains – Afghani and Himalayan. Somehow, it found its way to California, and more specifically, the county of Humboldt. As people in the state know, that is where a thriving marijuana industry is located.

From the USA, it took almost three decades before it made its way to the Dutch scene. And it did so with a lot of noise by winning the 2001 High Times Cannabis Cup.

Today, at least two seed banks are selling its seeds. While we know Yumboldt as an Indica-dominant strain, the other one leans more towards Sativa.

Yumboldt users can expect one thing – an intense body high. Some tests have shown its THC content to be as high as 24%. At that level, that is considered insane. As such, people who are using this particular cannabis for the first time may want to tone it down a bit. Over time and through subsequent uses, they can add a little bit each time.

Another thing to note about its effects is that it is a creeper. Unlike others, especially Sativa type strains, its effects manifest itself after a few minutes. Even then, it does not hit hard at all, but it will intensify.

In most cases, users feel a warming buzz that gently swings the mood. While most tend to feel happy, others may have a euphoric feeling. Soon, users feel pressure on the forehead that ebbs down to the body. As the Indica property starts taking over, most people would have droopy red eyes.

The complete body relaxation induced by Yumboldt, while intense, it is not likely to cause one to stay locked on the couch. Of course, that is dependent on how much one uses and tolerance limits. This effect continues on for the next two to four hours. As such, it is also likely to cause drowsiness.

Yumboldt is best used in the house at the end of the day or when there is nothing to do.

Yumboldt has an interesting pungent sweet and spicy aroma accompanied by a note of pine and flowers. For most people, its scent is reminiscent of being in a tropical forest.

Instead of having a dank and earthy taste, its flavors have a more pronounced sweet and spicy note blended with pine. A good way to describe how it tastes is that it is pleasant in a way that is consistent with what it brings to users.

As a result of using Yumboldt, most people will experience having dry eyes and mouth. How intense or pronounced these effects depend on how much one uses.

Being a 90% Indica plant, the medical benefits of Yumboldt is mostly due to the body high it delivers. It has good analgesic, anti-inflammatory, and anti-spasm traits. Once it makes its presence known to the body, users simply let go of stress. Hence, it may also be useful in managing depression.

Because of the way it calms the muscles and the nerves, that makes the strain useful for pain-relief. In this case, the use of cannabis may be controversial, but do not tell patients suffering from chronic illnesses what they can or cannot do. After all, they are the ones who have to endure pain.

Finally, worry-free and feeling relaxed, most users also find themselves feeling sleepy. In fact, the chances are high that its users fall asleep before its effects completely fade away. Quality sleep is important and insomniacs, in particular, need to sleep better, and that is where Yumboldt comes in.

Outdoor, Yumboldt grows up to 5 feet tall. It thrives best when there is plenty of sunshine. For most growers, though, the best place to cultivate it, or any cannabis for that matter, is in the privacy of their houses.

In either environment, most people should not have a lot of difficulty in growing, but some experience can come in handy. One the dense pinecone shaped buds form, then one can marvel at the sticky resin covered with brown and orange hairs.

The best way to grow Yumboldt is to indoor using hydroponics. Doing so, one can expect the flowering time to be 9 or 10 weeks. It can also have as much as 14 ounces of buds per square meter.

In a climate that is similar to California, the plant can grow up to 5 feet. It starts to flowers on the last of week of October with each plant producing at least 16 ounces of buds.

Have you ever smoked or grown your own Yumboldt? Please let me know what you think about this marijuana strain in the comments below.