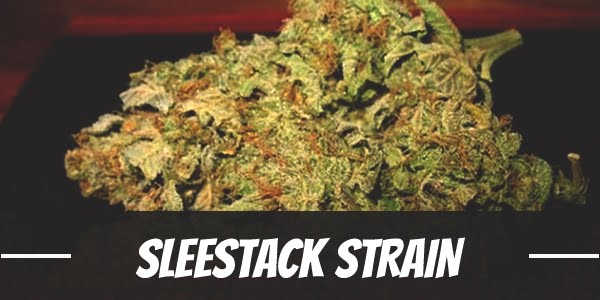 It has been four decades since the massive cover-up occurred. Not a lot of people today know about the family that wound up somewhere out there – the Land of the Lost. It is a place that none of us could ever go to, except for that family who found themselves there. It is there that they came across humanoids called Sleestak.

But a few did know about that “incident” and in particular, some people from DNA Genetics. Hence, they named one of their strains after those vile-looking reptilian creatures.

DNA Genetics has been around for ages, and when it comes to cannabis, they certainly know a thing or two. Unlike many others, they have the knowledge and expertise to create hybrids that truly sparks the inner creativity of people. Not only that, but such strain can also bring people to a state of unreal happiness and elation.

Using two strains – Schrom and Martian Mean Green – they created SleeStack. As one can surmise by now, it is a play on the fictional alien creatures in a popular TV series in the early 70s. Regardless, this is one potent strain that brings the best of Sativa effects to its users.

Anything that is too incredible has to be from another world. Some will cry divinity but let us stick to what we can see and touch. With SleeStack, one does not need to get on a space vessel to go to another realm or an alternate universe. Indeed, such is the potency of this hybrid which makes it sought after by hardcore users. But one thing to be clear about is that it does not cause psychedelic effects. Even so, it can be rather overwhelming, in a good way, that is.

From its onset, a mad rush of electrically-charged sensation sweeps into the mind and the body. In as far as mood-swinging effects go, this is one of the most effective. Hence, its users feel good about themselves in no time at all. Such positivity leads to a general sense of happiness. For some, the effects may be too intense which leads to the point of elation. If there is ever a time to feel what it is like to come-from-behind and win a championship, this is it.

SleeStack is ideal for use in a social gathering. With friends, its effects include making people more talkative. Perhaps a little too much so be careful as secrets are meant to be just that. Rather than causing a foggy mind with unbearable buzzing, what the strain does, too, is to unlock creativity. People who use SleeStack will notice how ideas rapidly form in their mind.

All these incredible effects, at the start, hide the fact that the strain is also working down to the body. Pretty soon, users feel extremely relaxed. Most of the time, they are able to function. But some who overuse may find themselves in a couch-lock.

Such a potent strain and it is evident with its very pungent skunky odor with the distinct smell of fuel. From its scent alone, one can imagine how this fits the needs of hardcore users.

As extreme as its fragrance is, this is somewhat subdued by the sweet and pine flavors blending in with its aroma. Still, it may get a little bit of getting used to with this strain.

We did mention that the strain is very potent and suggested that it was named after those weird green creatures. As such, one can expect this cannabis hybrid to be tough to handle. One thing we need to get out of the way first is that anyone who is going through a difficult time and having anxiety issues should avoid SleeStack. One of its side effects is that it can cause some people to have an elevated level of anxiousness.

Other than that, there is virtually nothing to be worried about. Sure, some users may feel their eyes and mouth drying, but these are expected with the use of cannabis.

Great power comes with uncanny ability to destroy. No, far from obliterating us, what SleeStack can do well for medical cannabis users is to wipe away stress. PTSD, depression, and other mental disorders, they should watch out for this strain.

Because one of its effects early on is to make people energetic, some users choose it to combat fatigue.

SleeStack grows well outdoor in an environment where there is plenty of sunshine. Be aware, though, that it does not tolerate excessive heat. At the same time, it does emit a pungent odor. As such, it may not be the best strain to grow if privacy is an issue.

The plant also thrives well inside the house. A little more work is needed such as trimming and pruning to keep it short as most growers would have limited space indoors.

Generally, the plant is easy to grow and ideal for beginners. Further making it easy is that it is resistant to mold and mildew.

It takes around nine weeks before SleeStack is ready for the next phase of its growth. Once it reaches maturity, growers can expect 12 to 18 ounces of buds.

Lucky are those who can grow outdoor without trouble at all. At any rate, each of these plants can produce around 18 ounces of dark green buds covered with sparkling crystals. They should start to transition to bloom stage during the second to third week of October.

Have you ever smoked or grown your own SleeStack? Please let me know what you think about this marijuana strain in the comments below.