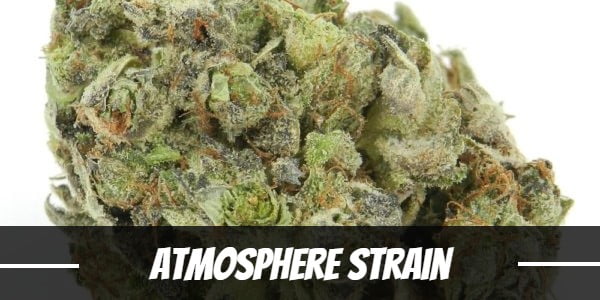 People use marijuana for a wide variety of reasons. Medical users need comfort, for instance. However, for recreational users, it is primarily for the ‘high’ that it induces. And, that being the case, one strain that stands out is Atmosphere. First, it takes users to thin air before sending them back to earth in utter bliss.

Though its breeders remain unknown, Atmosphere is a hybrid between two legendary marijuana strains. First is the notorious White Widow from Green House Seeds. It first broke into the scene back in the 1990s and quickly became a staple in the infamous coffee shops of Amsterdam. Known for its energy boosting cerebral high, it is also a highly potent hybrid.

Paired with the stress-busting OG Kush, the result is a well-balanced hybrid that delivers the best of both worlds. Besides the White Widow, Atmosphere carries in its DNA the prominent OG lineage that has practically spawned generations after generations of premium hybrids in the West Coast of the United States.

Being balanced, Atmosphere delivers both mental and physical high that complements each other. With up to 20% THC, it is also a very potent strain. It means that users should not take it likely as it can become overwhelming.

We don’t currently sell the Atmosphere seeds. Check out other Hybrid seeds in our marijuana seed bank.

With that said, the effects of Atmosphere quickly set in even after the first toke. It starts with a cerebral buzz that delivers the feeling of happiness and euphoria. As a result, users would feel uplifted. The head high is quite intense. Hence, those who used a tad bit more may have a foggy mind. Not that it is a bad thing. Far from it, some people actually like how it feels like floating in space.

After a while, the high gets better once its Indica traits begin manifesting. A tingling sensation then travels through the body which starts from the neck and spreads all over. It then leaves users in deep relaxation. The good thing about it does not immediately reach the point of drowsiness. It gives the users enough time to finish some tasks before hitting the bed.

The combination of aromas that Atmosphere emits is indeed pleasing for marijuana users. Amid being pungent, it also has a dominating citrusy smell similar to the scent of lemon. As the buds are broken, hints of earthiness and pine become more pronounced.

The taste of Atmosphere is just as pleasant as it smells. Though it still has a citrusy flavor, it also has a hint of pineapple. Of course, the classic marijuana flavor remains with a woody aftertaste.

It is common for users to experience some adverse reactions when using marijuana. However, those with low tolerance levels might experience more pronounced side effects than those who use it on a regular. As per usual, one could expect dryness of mouth and eyes when under the influence of Atmosphere.

Other unwanted reactions may occur as well if one results to overindulgence. The well-balanced and satisfying high may also be accompanied by a slight paranoid feeling.

Atmosphere has a relatively high THC content compared to other strains. As a result, it is the psychoactive properties that can also be considered as beneficial for medical marijuana patients.

We don’t currently sell the Atmosphere seeds. Check out other Hybrid seeds in our marijuana seed bank.

These patients also go after the same effects recreational marijuana users look for when using Atmosphere. As mentioned, it delivers a euphoric high that induces happy endorphins. This results to users having an easier time to wipe away stress and negative feelings. It helps uplift the mood which benefits people with mental disorders such as chronic stress, depression, and the like.

The anti-inflammatory properties found in its CBD content and sedating traits from the Indica are useful for patients as well. Atmosphere relieves mild pain, nausea, and muscle spasms which make patients feel at ease. Aside from that, it increases the appetite of patients which is a big help for those undergoing treatment.

The sedation does not only put the users into deep relaxation. As the effects of this strain subside, most users are likely to reach dreamland. Hence, patients should find it handy to have.

Information about growing Atmosphere is quite hard to find. Most likely, growing it is similar to other strains. Of course, for it to thrive well indoors or outdoors, the plant would need plenty of attention.

It is also important to remember that it has a pungent aroma. A way to prevent neighbors from recognizing the scent is to install carbon-activated charcoal for odor control when planted inside the house.

The flowering period may range more or less around 9 to 11 weeks. Yields that reach up to 10 to 12 ounces per square meter may be expected.

Atmosphere requires a warm climate when grown outdoors. Otherwise, it might not thrive well. Flowering time should fall in the middle of October. Expect yields to reach up to 12 ounces per plant or more.

What is the Atmosphere strain yield?

How much THC does Atmosphere have?

What are the origins of the Atmosphere strain?

Atmosphere was created from a mix between White Widow and OG Kush.

Have you ever smoked or grown your own Atmosphere? Please let me know what you think about this marijuana strain in the comments below.