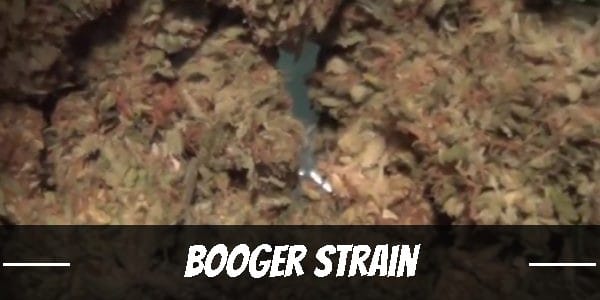 Most hybrids are named after their parents or their place of origin. However, there are standouts like Booger that, for some unknown reason, retain a name completely unrelated to even its high. Although, some speculate that it must be due to the lightheartedness sensation it fosters. Thankfully, most of the cannabis community could care less.

Although Booger’s name sounds unappealing, this well-balanced Colorado famous smoke is proven to be a pleasant and enjoyable strain. Its flavor is richly earthy with a tinge of sweetness. Meanwhile, its THC levels test beyond 20% and are notable for their impressive buzz.

An even cross between Sativa Strawberry Cough and Indica Bubba Kush, Booger is a force to be reckoned with. After all, the former is a sweet strawberry syrup with powerful energizing effects. Bubba Kush, on the other hand, is a renowned bud for its tranquilizing sedation.

No doubt, Booger is a thrill seeker’s strain. Its THC levels of 24% are powerful enough to devastate even the most experienced of users. While that may sound daunting to beginners, all hope is not lost. Through pacing and moderation, and possibly the help of a seasoned friend, experiencing the highly potent effects is still possible.

We don’t currently sell Booger seeds. Check out other hybrid seeds in our marijuana seed bank.

With that said, Booger’s onset starts out with an uplifting rush to the head. Quickly, a sense of happiness wells from within and leaves users feeling pleasant about themselves. Some may even find positivity or end up giggling at the littlest of things.

For those with work ahead of them, the strain is a godsend. Its clearheaded high helps thoughts flow freely and inspires a surge of creativity. And, together with a heightened sense of focus, users stay motivated while working on tasks or finishing projects.

In time, the same chill buzz completely envelops the entire body in relaxation. Not of the lethargic or sedating sort, however. Instead, it loosens tight knots in the muscles so users can move freely.

Booger is nothing like what its name suggests. Au contraire, its classic blend of skunk and damp earth is reminiscent of Bubba Kush. Meanwhile, its prominent tangy undertones of sweet berries permeate in the air once its buds are broken apart.

Drawn in, Booger’s smoke burst in a fusion of tropical flavors. The most prominent of which are sweet berries. On the exhale, a dash of hash and spice lingers in the palate.

High THC strains like Booger come with their own share of adverse reactions. Besides the usual dry eyes and cottonmouth, overconsuming the bud can overstimulate the senses and induce a slight paranoia. It may even trigger anxiety in some. Although one’s mood before toking the joint is a big factor, so is individual tolerance. As such, marijuana should always be toked in moderation.

Headaches are also a common side effect of marijuana use regardless of the strain.

Booger was likely made for recreational use. After all, this has been the perception whether rightly or wrongly about marijuana use. Still, the strain is not without its benefits. For one, its happy high is powerful enough to appease symptoms of depression and other mental illnesses like PTSD. A natural mood enhancer, it may also be used as a stress reliever and an anxiolytic.

We don’t currently sell Booger seeds. Check out other hybrid seeds in our marijuana seed bank.

Its high levels of THC also contribute to its analgesic properties. Beginning from the temples, it soothes away pain caused by various aches such as menstrual cramps, headaches, or bruises. Its anti-inflammatory properties also reduce swelling and redness.

One of the best times to use Booger is actually a few hours before a meal. This is because the same psychoactive compounds restore a hearty craving for food. Similarly, it may also be used by people diagnosed with anorexia as an appetite stimulant.

Booger’s nugs are comparable to Bubba Kush’s. Their shape is similar to that of a spade with one blunt end and the other tapering out. The mint green buds are chunky yet compact and totally covered with orange pistils. Lastly, as a testament to its potency, a frosty but somewhat milky blanket of trichomes cover it.

Taking after its evenly split genes, Booger exhibits traits of Indica and Sativa in its structure. For instance, its stalks grow tall but are quite sturdy. Though its branches are thin, they grow laterally and can actually carry the weight of its heavy buds. This allows the hybrid to adapt well regardless of its settings.

In a natural environment, Booger thrives. However, with the constant threat of pests and disease, many commercial growers opt to cultivate their batch inside greenhouses and grow tents. Besides offering better protection, controllable growing spaces allow aspiring breeders to adjust deciding factors such as lighting, temperature, and humidity based on their plant’s performance.

Growers may want to install odor-control systems though. Because of its high THC content, Booger tends to get very pungent – especially as it hits the flowering stage.

Because of its split structure, it can take Booger anywhere between 7 to 10 weeks to flower indoors. During harvest, it produces up to 12 ounces of buds per square meter. In the hands of a seasoned grower, the hybrid will flower faster and yield better.

Outdoors, Booger thrives in a well-aerated garden exposed to lots of sunlight. The plant should blossom by the last week of September. However, depending on the climate and experience of the grower, it can extend up to the second or third week of October. Regardless, each plant will continue to produce more than 12 ounces of trichome frosted buds.

What is the Booger strain yield?

How much THC does Booger have?

What are the origins of the Booger strain?

Booger was created from a mix between Strawberry Cough and Bubba Kush.

Have you ever smoked or grown your own Booger? Please let me know what you think about this marijuana strain in the comments below.