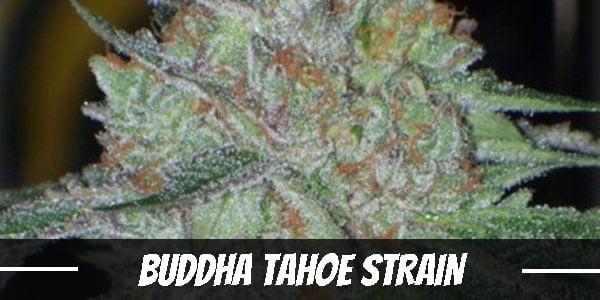 Big Buddha Seeds is one of the most well-known companies in the cannabis industry. It was from their laboratories that the world-famous Cheese seed was first created. And, ever since, the dispensary has continued to pursue the tastiest of cheese strains and even more exotic genetics.

But, every now and then, they break from their signature flavor especially after breaking into the U.S. market. In attempting to replicate the ‘world of American Kush’ strains, they produced the extremely potent and zesty Buddha Tahoe. Tested to contain more than 20% THC regardless of the batch, Big Buddha Seeds has even nickname it ‘The Don Corleone of Highs’ or ‘Don Big Buddha’ for short.

This strain is a backcross of the OG Tahoe Kush, an ocean grown variety from the Cali Connection that Big Buddha Seeds believes to be the epitome of United States Kush. After all, it does boast the sharp and tangy flavors as well as strong hit. To this end, Buddha Tahoe does not disappoint. It truly is a representative of modern Kush strains.

Buddha Tahoe’s impressive resin content and sharp flavors give it its exceptional effects that it even won the 2011 High Times Cannabis Cup. It must not be confused with the Sativa-dominant Buddha Tahoe OG though, even if the pure Indica’s effects is just as uplifting.

Like other Indica strains, it takes quite a bit of time before Buddha Tahoe’s creeping buzz sets in. But, for those paying attention, the initial onset begins with a euphoric rush that leaves users feeling giggly at all times. Although it has no traces of Sativa, its psychedelic effects are cerebral-focused. And, as it spreads to the deepest recesses of the mind, users find themselves beaming with happiness.

Looking to buy seeds like Buddha Tahoe? Check out our marijuana seed bank.

After an hour or two, the uplifting sensation ebbs down from the temples. In waves, a heaviness courses through the muscles and settles in the limbs. Keeping users from a devastating couchlock is the initial mental stimulation.

With each toke, the soothing high intensifies until the body is freed of tension. Enveloped in relaxation, many find themselves drifting off to dreamland. For this reason, Buddha Tahoe is best used at night. Too much, however, may overstimulate the mind and keep users awake.

Buddha Tahoe has a pungent aroma with overtones of lemon. Broken apart or grounded, its undertones of damp soil and Kush permeate the air.

Drawn in, a zesty lemon bursts in the taste buds. Its citric overtones are complemented by refreshing undertones of pine. On the exhale, an earthy flavor with hints of hash, commonly found in Kush, lingers in the palate.

It is not uncommon to see eyes redden while using marijuana. And, with cannabinoids interfering with the production of saliva, there is also the possibility of a cottonmouth. Though both symptoms are unavoidable, they are easily manageable with a glass of water.

Users will have to be careful about overconsuming the strain though, as it can cause some to ‘green out.’ Largely characterized by dizziness and heightened awareness, the experience can be triggering for people with anxiety. Others may also feel a slight headache. Pacing and moderation, however, will keep it at bay.

Presumably, Buddha Tahoe was created for recreational purposes. However, the strain’s chemical compounds provide a reprieve against a myriad of afflictions. Its potent head high, for example, appeases symptoms of stress and depression. In inducing a euphoric rush, it erases negativity and reinforces positive self-affirmation. Similarly, it can also be used to calm the fast-paced thoughts of a person ridden with anxiety.

Looking to buy seeds like Buddha Tahoe? Check out our marijuana seed bank.

As a powerful analgesic, Buddha Tahoe delivers a soothing high beginning from the temples. In doing so, it relieves various types of aches and pains. As many delve deep into relaxation, the sedating properties of the bud take into effect. And, before users know it, the natural sleep-aid has sent them off to a peaceful, unencumbered slumber.

Because of its pure Indica genes, Buddha Tahoe is fairly easy to grow. It is short stalks are sturdy and can withstand relatively strong winds, sudden changes in temperature, and common diseases brought by moisture. While this may be so, the plant still prefers a warmer, more temperate climate.

Grown in a well-aerated garden, Buddha Tahoe thrives. However, commercial growers prefer growing the Indica in indoor settings like greenhouses. Besides keeping pests away, it allows breeders to adjust important factors such as temperature, lighting, and humidity.

Once mature, the strain produces round, densely packed nugs that take on the shape of pepper. Its hues are a cool mint with flashes of orange pistils. Lastly, as a testament to its potency, a thick layer of white trichomes coats each bud.

But, what is truly incredible is its availability in feminized form. While most breeders prefer a proprietary hold on their products, Big Buddha Seeds made theirs publicly available to the rest of the world. Not only does this make the growing process easier, it eliminates the possibility of throwing away at least half the batch.

After flowering for about 8 to 9 weeks, each square meter of Buddha Tahoe yields between 10 to 12 ounces of trichome coated buds. Applying the Sea of Green will encourage better yields. It may even hasten the flowering period to 7 weeks.

Growers from the northern hemisphere can expect Buddha Tahoe to produce more than 12 ounces of buds per plant by the last week of October.

What is the Buddha Tahoe strain yield?

How much THC does Buddha Tahoe have?

What are the origins of the Buddha Tahoe strain?