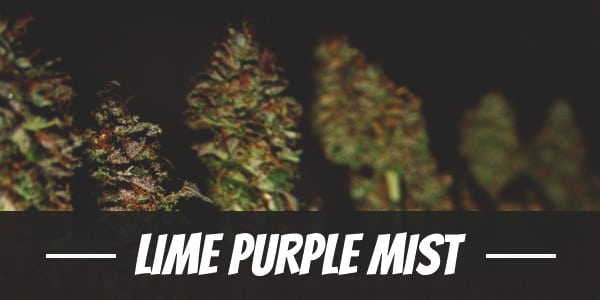 Lime Purple Mist is a tantalizing strain. From the fragrance it emits to the smoke it produces when combusted, it retains the soothing overtones of citrus and grapes. When drawn in, surprises its users with an avid mix of spices and mint.

Each toke intensifies its slowly creeping buzz, giving users time to bask in its calming effects. It is this particular trait of the potent Lime Purple Mist that sets it apart from other Indica-dominant hybrids. And to create such an impression, its mysterious breeders took two premium strains.

One is Purple Haze. A Sativa staple, it induces a dreamy but highly energetic buzz that caught Jimi Hendrix’s attention in 1967. The other parent, on the other hand, is Lime Haze. Though many know its name, it remains an elusive underground strain surrounded by stories of greatness.

Though it boasts an extraordinary THC of up to 28%, it is far from overwhelming. So long, of course, as the strain is used in moderation.

One of the reasons why enthusiasts prefer Indica-leaning strains is for its slow-building high. And, to that end, Lime Purple Mist does not disappoint.

Instead of slamming the body during the initial onset, the uplifting buzz gradually intensifies until users become aware of it coursing through their veins. Beginning with a euphoric rush from the temples, of course. As it spreads, it brings enthusiasts to a state of happiness and wellbeing.

In time, the tingling sensation trickles down to the rest of the body. It leaves users feeling completely relaxed, dreamy, and light. Although, in reality, a heaviness has already sunk and pinned them to their couches. Eventually, it becomes increasingly difficult to ignore Lime Purple Mist’s powerful sedation that many falls into an encumbered slumber without realizing it.

Used outside of one’s limits, the Indica-leaning hybrid’s potent effects can be devastating, especially as users realize they are unable to move. For this reason, marijuana should always be paced. Better yet, moderated.

Even at the first whiff, Lime Purple Mist’s citric blend of lime and grape are apparent. Though sweet, it remains subtle because of the strain’s herbal qualities. Once broken apart, a cooling mint tantalizes the senses.

The zesty flavor of lime and the sweetness of grape explode in the palate once drawn in. Though overpowering, mild undertones of earth remain detectable. Meanwhile, a spicy aftertaste lingers on the mouth with each exhale.

Cannabinoids found in marijuana temporarily inhibit the production of moisture in the salivary glands, thus causing a cottonmouth. To some degree, it may also dry the eyes. This stays true regardless of the strain. Thankfully, it is temporary and should fade away shortly. Downing a glass of water, however, will immediately relieve any discomfort caused by dehydration.

Though it is tempting to pair the Lime Purple Mist with alcohol, it is best not to. Pairing the two depressants can lead to fatal consequences. Since marijuana is an antiemetic, it increases the likelihood of alcohol poisoning as the body is unable to ‘vomit’ the toxins.

Additionally, this strain is highly potent and may not be a good choice for users with low THC tolerance. It is imperative that users consume the bud sparingly and in moderation as it takes a while before its full effects manifest.

Did you know that the chemical compounds found in marijuana mimic neurotransmitters? It is precisely the reason why strains presumed to be for the recreational community retain healing properties. And, with high levels of THC, Lime Purple Mist is sure to be a natural painkiller.

Its soothing effects relax the muscles and keep them from suddenly tightening or contracting. As such, they are great for users easing pain caused by cramps. They can also be used to rid the sharp sting in the gastrointestinal tracts of food-deprived bodies.

In cases of mental illnesses such as depression, Lime Purple Mist’s uplifting high is effective in combatting low moods and self-destructive thoughts. It untangles stress at the core and, together with its sedating effects, allows users to regenerate through sleep.

Although, users will have to prepare some snacks as the same psychoactive compound also stimulate the appetite. In heightening the user’s five major senses, it also tells the body that it wants to eat. As such, one of the best times to toke the strain is an hour or two before a meal.

Lime Purple Mist’s Indica structure makes it naturally sturdy and resistant to a variety of diseases. It can even withstand sudden changes in weather or slight dips in temperature. However, this does not guarantee an easy growing process.

Its leaves are broad, and if left unattended to, can affect the overall health of the plant. Moreover, they do not fair well with summer heat and sunlight. Both of which are essential to bring out the plant’s full potential. For this reason, many commercial breeders prefer growing their batch indoors.

Though mostly Indica, Lime Purple Mist’s flowers take on a Sativa shape. Each bud tapers on both ends with flashes of royal purple, long dark green leaves, and amber-hued pistils surrounding it. And, as a testament to its potency, thick layers of milky trichomes scatter all over it and its calyxes.

As of writing, the original breeder has not made seeds of Lime Purple Mist publicly available.

Typical of Indica-leaning plants, Lime Purple Mist flowers quickly – between 7 to 9 weeks, to be exact. Once ready for harvest, it yields 10 to 12 ounces of buds per square meter. But, prolonging the blossoming period or applying the Sea of Green technique will encourage better yields.

Growers should see flowers before September ends. Although, this usually depends on the climate. While it can withstand most weather conditions, it cannot withstand extreme ones. As such, some may find Lime Purple Mist blossoming by the second or third week of October. Regardless, each plant will produce a hefty yield of more than 12 ounces of buds.

Have you ever smoked or grown your own Lime Purple Mist? Please let me know what you think about this marijuana strain in the comments below.