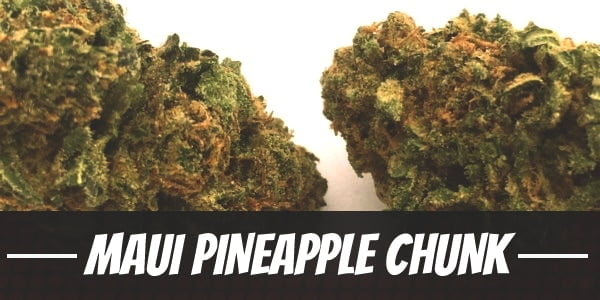 Maui Pineapple Chunk is a vibrant hybrid from the island of Hawaii. It pays its homage with tropical flavors and blissful highs that are reminiscent of vacations spent by the beach. With higher than average THC levels and perfectly balanced genes, its versatile high transcends both the recreational and medical communities.

In creating the strain, Pua Mana took the Pineapple Chunk for its high yields and mouthwatering smoke. Equally delicious is Maui Pineapple Chunk’s second parent, a Nāhiku cut of Maui Waui (or Wowie, as it is sometimes called). The bud is an essential ingredient to its offspring’s potent, cerebral buzz.

Without Pua Mana’s efforts during the 1970s crackdown against marijuana, Maui Pineapple Chunk would not have existed. Today, the seed bank continues to advance Hawaii’s cannabis industry by creating impressive ‘Pakalōlō’ hybrids.

Maui Pineapple Chunk is one of the most potent strains in the world. With THC levels ranging from 21% to 29%, a single puff of its pineapple-flavored smoke delivers a profound psychedelic high. And, although an evenly split hybrid, its effects leans more towards Sativa with its energy boosting and mood lifting elements.

The initial onset, for example, is marked by a reinvigorating euphoric rush that leaves users embracing their inner happiness. Despite its intense effects, the upbeat disposition does not hinder productivity. Far from it, it accommodates a free flow of innovative ideas through its clearheaded high. Combined with a surge of creativity, casual users are motivated to comb through tasks and projects. Although, in excess, the fast-paced thoughts can be a bit of overwhelming.

Gradually, the uplifting buzz ebbs down to the rest of the body. From the temples, a soothing tingle loosens tightness in the muscles.

To some, the freedom from mental and physical inhibition is arousing. This is not surprising as Maui Pineapple Chunk is also used by others as a natural aphrodisiac. Used well within one’s limits, the strain can be the perfect addition to a night in with a loved one.

Maui Pineapple Chunk has a predominantly earthy fragrance. But, taking a whiff of the bud reveals its delicious fruity undertones. Ground up or combusted, a refreshing yet woody note of pine permeates in the air.

Maui Pineapple Chunk’s mouthwatering smoke tastes just like its namesake fruit. It is sweet yet the sour tropical aftertaste excites the palate and takes users on a journey to Hawaii.

One of the most common side effects to toking marijuana is dehydration. Its symptoms are commonly located in areas like the eyes. But, with certain cannabinoids interfering with the production of saliva, users end up with a cottonmouth too. Most people often ignore the dry spell due to their mildness. If the discomfort escalates or continues, a glass or two of water should help.

While its delicious smoke may be tempting, it is best to not overconsume the bud. High THC strains like Maui Pineapple Chunk can overwhelm the senses. Some may even ‘green out’ or feel so dizzy that it can lead to nausea.

Hawaii is one of the world’s best go-to destinations for de-stressing. However, getting to the tropical paradise is expensive and not many can afford it. Thankfully, consuming Maui Pineapple Chunk induces the same effect. Its euphoric rush clears away stress and the negativities that come with it. Similarly, the bud can also be used as an anti-depressant.

Being an evenly balanced hybrid, Maui Pineapple Chunk also comes with physical benefits. Its high levels of THC, for example, ease various aches beginning from the temples. Deep in relaxation, it is not uncommon to find users eventually falling asleep.

A powerful analgesic, the hybrid also has antispasmodic properties that alleviate sudden muscular contractions. For this reason, the bud can be used to manage psychosis and other afflictions with symptoms relating to uncontrollable spasms. However, users should still consult with a medical professional before attempting self-medication.

Luckily, Pua Mana, the 1st Hawaiian Pakalōlō Seed Bank, sells seeds of Maui Pineapple Chunk. It comes in regular form though so aspiring growers may have to pay extra attention to their plant’s surroundings. Otherwise, the risk of throwing away half the batch of males is higher. Some may also turn into hermaphrodites in stressful environments. In any case, it is best to germinate a few more seeds to increase the chances of harvesting a calyx-filled female plant.

Maui Mango Diesel’s success outdoors depends largely on location and climate. Grown in Hawaii, the Pacific hybrid is accustomed to long, sunny days with little variation in terms of length. As such, it may have a hard time growing in areas with short days and even shorter summers. All hope is not lost though as indoor growing spaces and other controllable environments can be adjusted to mimic a tropical climate.

Cultivated indoors, the plant may need to be exposed to growing methods like Sea of Green and Low-Stress training. The latter helps keep females from turning into males while the former encourages even better yields.

Indoors, Maui Pineapple Chunk typically flowers between 9 to 10 weeks. Living up to its monster-yielding genes, the plant yields up to 14 ounces of buds per square meter. Under the expert care of a seasoned grower, it can produce even more.

Each plant should produce at least 12 ounces of buds before October ends.

Have you ever smoked or grown your own Maui Pineapple Chunk? Please let me know what you think about this marijuana strain in the comments below.