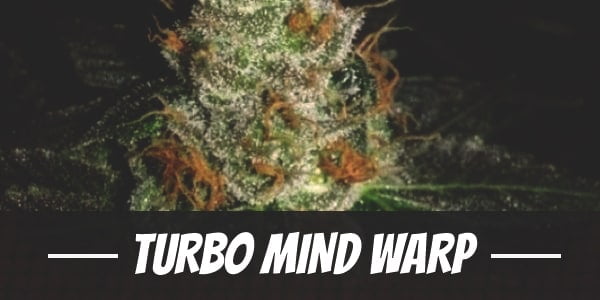 As a widely known cannabis genetics company, MTG Seeds is known for combining premium strains and producing one that is just as valuable. Take, for instance, Turbo Mind Warp – a Sativa-leaning hybrid with stable levels of 25% to 28% THC.

In the process of creating Turbo Mind Warp, MTG Seeds took the Sativa-leaning Mendo Mind Warp. Besides its healing head and body high, the strain is also popular among growers for being a vigorous yielder. Next, the breeders took their best-selling Turbo Diesel for its sturdy structure, quick flowering, and easy trimming.

Turbo Mind Warp does not fall behind its parents. An ode to its potency is the milky, sticky trichomes surrounding its buds among the stunning wine-colored leaves and colorful pistils.

Apart from its medical use, Turbo Mind Warp is also an excellent strain for recreational users. Having one of the highest THC levels in cannabis industry, the bud assures users of a profound psychedelic experience beginning with the mind.

During the onset, it sends a euphoric rush to the mind. Quickly, the clearheaded high enhances the mood and leaves users feeling cheery and upbeat. Used within one’s personal tolerance, the uplifting buzz is not at all overbearing. In excess, however, it may be on the verge of being too intense.

Even so, it does not take long for the Indica effects to stabilize the initial head high. Its signature tingling sensation soothes and reenergizes the body. Though completely relaxing, the relaxation it induces is not sedating. Instead, it frees away tightness in the muscle so users are free to move around as much as they like.

Overall, Turbo Mind Warp is a great wake-and-bake strain. Used in the morning, its mentally and physically reinvigorating effects make seizing the day a breeze.

Turbo Mind Warp has a pungent diesel scent with floral hints of lavender. Crushing the buds, however, reveals notes of wet soil and wood.

Drawn in, Turbo Mind Warp entices the palate with the taste of freshly picked herbs, spices, and flowers. The smoke is a little bit harsh, however, especially as the once muted diesel bursts in the palate. Thankfully, the bud leaves a refreshing aftertaste of pine.

Like other strains, Turbo Mind Warp comes with a mild case of dehydration. It most commonly affects the mouth. But, with cannabinoids interfering with the production of moisture in the tear ducts, users will also end up with red eyes.

In high amounts, however, Turbo Mind Warp can truly ‘warp’ the senses. Being such a potent strain, it is possible that some users will feel slightly paranoid or overly anxious. While individual tolerance plays a great role in how things turn out, so does one’s state of mind. As such, pacing and moderation should always be practiced.

Like other strains from MTG Seeds, Turbo Mind Warp has therapeutic value. Its high THC content, coupled with other chemical compounds like CBD, provide a reprieve against a myriad of afflictions.

People cite stress-relief as the most common reason for getting high. In fact, in the United States alone, almost a third of cannabis using individuals do so for that very motive. And, to that end, Turbo Mind Warp does more than just wipe away worries for the day. The strain also has immense value to people suffering from depression or those whose mental illnesses have been accelerated by stress.

THC, in high amounts, can exhibit analgesic properties. Beginning from the temples, it soothes away various pains such as headaches, cramps, as well as joint aches. Meanwhile, the tingly sensation reinvigorates the body and gets rid of fatigue.

Turbo Mind Warp is one of the most stunning plants to grace the cannabis industry. As it matures, its leaves turn dark red and its buds deepen into a forest green. Colorful flashes of pink and purple pistils surround the bud. Blanketing the large and heavy nugs is a thick layer of sparkling trichomes.

Though it leans toward Sativa, Turbo Mind Warp is quite sturdy. Its mold and cold resistant genes allow it to withstand problems caused by moisture in the air. Moreover, its high calyx-to-leaf ratio makes pruning easier as it keeps sugar leaves to a minimum.

While growing the plant is a total breeze, acquiring its seeds is a feat. Because it was released as a limited-edition strain, there are only a handful of online and local dispensaries carrying the breed. The seeds also come in their regular form, which means half the batch turn out to be males. Germinating more seeds will increase the likelihood of growing female plants though. Low-Stress Training will also keep females from turning into hermaphrodites.

Turbo Mind Warp has a significantly shorter flowering period. Instead of the usual 10 to 12 weeks, it only takes the hybrid about 9 to 10 weeks before each square meter produces more than 12 ounces of buds.

In the northern hemisphere, Turbo Mind Warp flowers by the second or third week of October. It yields at least 16 ounces of buds per plant.

Have you ever smoked or grown your own Turbo Mind Warp? Please let me know what you think about this marijuana strain in the comments below.