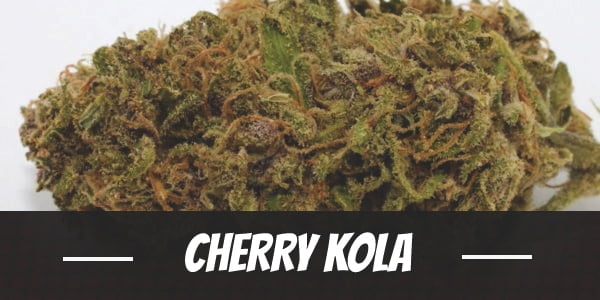 Cherry Kola, for some reason, exudes pleasantness even with its name alone. It also becomes heartwarming after learning about its origin. No, in this case, it is not the lineage itself that is of any interest. Instead, it is the people of a county in California behind it that has done something incredible.

A non-profit organization, Sonoma County Collective was established to serve the needs of patients. The idea of being a member of the collective is to have access to low-cost medication. By sourcing from the membership, making the prices affordable becomes possible. Even better, they have a patient-to-patient delivery service that is convenient as well as discreet. However, this is limited to the county of Sonoma.

The collective is run and managed by the members. Since their founding, they have produced several strains. One of them is Cherry Kola.

Genetically, the strain is a cross between two Afghani strains. One is from the province of Kandahar, while the other is from the region of Takhar. Both are pure breed landrace strains of exceptional quality and traits. One of the most notable characteristics inherited is the cherry-like scent. Hence, they used the fruit as its name.

Cherry Kola leans toward its Indica side. As such, users can expect a full-body relaxation with its use. Even so, it does provide pronounced Sativa effects too.

Cherry Kola, with some 16% of THC, is a very potent strain. Once it kicks in, it induces a euphoric buzz that is not only uplifting but also incredibly relaxing. People using it tend to have an overwhelming sense of happiness. As a result, they become not only cheerful but also sociable.

Meanwhile, the intensity of the body high continues to intensify. As it does so, it does not cause the mind to become foggy. It does not have any psychoactive traits that lead to psychedelic experiences. Instead, what it does is to soothe the muscles as it induces a full-body relaxation.

A local winemaker in Sonoma County, Brandon, has this to say. “The Cherry Kola bud has enticing aromas of raspberry framboise and honeydew, with just a hint of freshly cut grass. Crushed pine needles and esters of lemon rind seem to fill the room that it dries in. While preparing the Cherry Kola for a joint, our noses were filled with aromas of red Starburst and lemon tree leaves. Smelling our fingers afterward reminded us of kiwi fruit and gooseberry with suggestions of sweet tree sap.”

On how Cherry Kola tastes, Brandon says, “The initial drag brings an explosion of bing cherry and lemon verbena flavors. On the exhale, there is a really smooth texture with suggestions of a kola nut, sarsaparilla, and raspberry tea. The intense flavors leave the palate with a pleasurable finish of freshly sliced lemon and lavender.” As many people know, Sonoma is also famous for its many vineyards and wines. Coming from a wine connoisseur, that says a lot about how pleasant the strain is when used.

Using cannabis brings benefits to medical cannabis users and, not to mention, the high that recreational users crave. At the same time, it also comes with other reactions that can cause discomfort. For instance, feeling the throat dry and having bloodshot red eyes. Such responses are typical of using marijuana.

Depending on the characteristics of strains, these and other reactions can be pronounced or otherwise. One significant factor is the amount of weed used. Another is individual physiology and conditioning, as well as health status. Still, some strains do tend to cause more of these unwanted effects.

Cherry Kola, as some people noted, may also cause some to feel paranoid. To a lesser degree, a few may even feel more anxious. As the effects of the strain intensify, there are also people who may feel a little dizzy.

Despite the adverse effects, many people use Cherry Kola for a variety of reasons. Relaxing at the end of a long and hard day is mainly recreational. But there are also some people going through stressful times. As the strain delivers a euphoric buzz, it becomes a powerful stress-reliever. As noted too, it induces happiness. Hence, people with depression may find it so much easier to focus on the positive with its use.

Another important use of Cherry Kola is relief from pain. Chronic illnesses and many other diseases that are painful makes life so much worse than it already is. Instead of misery, the strain can alleviate these pains and aches and provide comfort.

Many people who use this strain are also bound to feel hungry. Provided that they do not smoke too much, then it should not be a problem to get up and eat some food. As such, people who need to stimulate their appetite will benefit from Cherry Kola.

Feeling utterly relaxed, many users do tend to fall asleep. For patients, this is helpful to faster recovery. Insomniacs, too, have an ally with this strain.

Unfortunately, it does not seem that the collective is making the seeds of Cherry Kola available. Nonetheless, it is an Indica plant. Hence, like others, it likely thrives in both the outdoor and indoor environments.

Typical Indica plants have a flowering time of 7 to 9 weeks. Cherry Kola is likely to be the same. Also, during harvest, each square meter should produce some 10 to 12 ounces of buds.

Lacking in information, the best estimate of its flowering time should be between September and October. Each plant is also like to produce at least 12 ounces of buds or more.

Have you ever smoked or grown your own Cherry Kola? Please let me know what you think about this marijuana strain in the comments below.