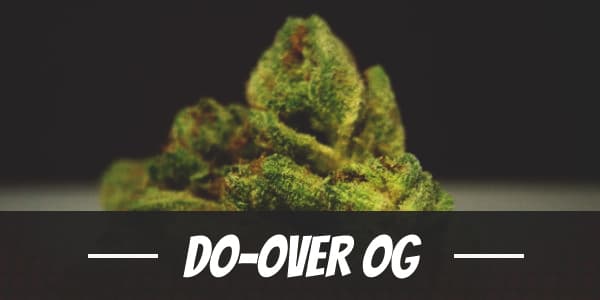 The OG varieties are famous for being versatile strains. For example, the original ‘Ocean Grown’ (OG) Kush is used for its excellent performance in the grow room. It can also be medically altered (marketed as the high CBD Wellness OG) to ease a variety of mental and physical discomfort. A hybrid called Skywalker OG is perfect for users in need of a stoney, spacey high.

Another strain worthy of attention is Hindu Kush, a pure Indica landrace from the mountain ranges of central Asia. This exotic herb is known for heavy-hitting body effects that inevitably lock users to their couches.

Using the indigenous strain as a genetic base, Neighborhood Farms added three members of the OG family and created a masterpiece for the Do-Over event’s 10th year anniversary. Do-Over OG’s high potency levels make it a great social hit during the festivities. But, users may also take advantage of its pharmacological value.

Do-Over OG scores a perfect 10 when it comes to psychedelic effects. Its more than 21% THC makes sure of that. At the onset, it sends a euphoric zap to clear the mind of negativity and to release tension from the body. It quickly replaces self-doubt with a sense of happiness from within.

Free of inhibition, users become cheerful and lively with conversation. This makes the herb a great recreational strain, perfect for sharing with peers during the Do-Over event across Los Angeles.

At the height of the bud’s mental effects, a flow of creative thoughts swarms the mind. It inspires keener sensitivities without sacrificing detail. In fact, brainstorming sessions are quicker because of the strain’s emphasis on focus. This singlehandedly makes task management easier.

In time, the body begins to feel heavy. An uplifting sensation, originating from the temples, spreads all over the limbs. What keeps the Indica buzz from becoming numbingly crushing is the hybrid’s mental stimulation. At just the right amount, the relaxing qualities allow one to move around.

In terms of fragrance, Do-Over OG inherited the unmistakable Kush aroma of its lineage. It blends sweetness into earth but adds a dash of spice and pine.

The mild fragrance of Do-Over OG precludes a savory smoke; one made up of earthy overtones and spicy undertones. Savoring the strain sharpens the flavor. However, doing so might scratch the throat and cause a bout of coughing.

As a highly potent strain, one would expect Do-Over OG to have a myriad of adverse reactions. But, it is actually quite the opposite. Besides the mild dryness in the eyes and the cottonmouth, it has little to no negative effects on the user. Moreover, the said symptoms are only noticeable wen a large amount of the herb is consumed.

What gives Do-Over OG its therapeutic value is actually its cannabinoids, particularly its potent psychoactive compounds. In just a few tokes, the fast-acting strain induces a happy high that boosts the moods of those with depression. It also helps war veterans and abuse survivors manage their PTSD. Meanwhile, its stimulating high relieves stress and restores appetite.

The CBD content of Do-Over OG is unknown. But, there is general agreement that it is similar to that of other recreational strains or a little over the usual due to Wellness OG’s influence. As such, it may appease fatigue, release tension, and make the body conducive to deep relaxation. However, anybody planning on mitigating serious health concerns with the strain should seek the opinion of a medical professional.

The OG and Kush strains are known for being sturdy plants and vigorous producers. Do-Over OG is no different. The plant itself is very hardy. Most of the time, it does not need external support as its thick stems can carry the weight of its heavy buds.

The spade shaped nugs itself are beautiful. Its pistils boast a dark amber color that enhance its lively forest green hues. Sweet resin makes the buds sticky. Meanwhile, the thick blanket of crystal trichomes allude to its potency.

Do-Over OG likely thrives outdoors, in warm climates. However, Neighborhood Farms likely grew the naturally short plant inside an artificial environment. By doing so, the breeders were able to genetically engineer the strain’s psychoactive compounds as well as enhance its therapeutic benefits. Indoor growing also offers better protection against pests and common diseases.

The flowering period of Do-Over OG is between 7 and 8 weeks, with each square meter yielding up to 14 ounces of buds. Those who would like to make the most out of the buds should train the plant using either the Screen of Green (SCRoG) or Low-Stress techniques.

A vigorous producer, each Do-Over OG plant yields more than 14 ounces of trichome frosted nugs. The strain flowers by October.

Have you ever smoked or grown your own Do-Over OG? Please let me know what you think about this marijuana strain in the comments below.