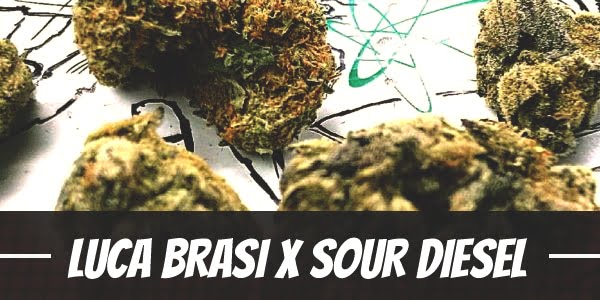 It would be wrong to name the toughest men in The Godfather’s New York after a strain that does not match him in power. After all, Luca Brasi was Don Vito’s go-to guys for accomplishing ‘unfinished business.’

However, instead of harming people, the Luca Brasi x Sour Diesel strain does the exact opposite. It helps patients get through the suffering of either mental or physical health issues with its impressive CBD levels of 13%.

The Indica-dominant herb’s parents are obvious from its moniker. Colorado-based breeders The Bank Genetics selected a female Luca Brasi which is famous for its high CBD content. The next genetic base is a male Sour Diesel, added in for its vigor in the grow room.

With a THC content of 10 to 11%, it is easy to belittle the strain. Still, it induces a comfortable high that entices users with different backgrounds. Moreover, its gentle buzz is a wonderful choice for beginners compared to the head-slamming high of today’s powerhouses.

Due to its low THC content, along with a high amount of non-psychoactive compounds, onset is slow and mellow. However, once it begins, it gently uplifts the mind with a subtle rush of energy that is barely noticeable at the onset. It conjures one’s long lost optimism that, in turn, inspires a sense of happiness.

The upbeat disposition also helps casual users stay focused at work. Through the mental clarity it provides, it allows thoughts to flow smoothly as one completes complete tasks or pursues passion projects.

As each hour passes, the same uplifting buzz trickles down from the temples. It removes tension from the muscles, unties knots, and eases tightness. Feeling totally relaxed, the urge to stay seated in one’s chair or lounge around on a couch intensifies. Keeping users from being totally glued is continuous rush of energy that, in low doses, can be a great companion for a stroll or sight-seeing.

Because of its non-sedating and functional effects, Luca Brasi x Sour Diesel can be used at any time of the day by a versatile group ranging from beginners to veterans.

The pungent smell of lemon and diesel ooze out of Luca Brasi x Sour Diesel’s buds. Enhancing it are overtones of wet soil which can overpower the initial citric scent at times, especially once the buds are broken apart or combusted.

In the palate, Luca Brasi tastes just like freshly squeezed lemons which have been picked from its tree. Undertones of earth are present as well, along with the taste of skunk. On the exhale, a sour diesel aftertaste washes over the mouth.

By far, the worst effect Luca Brasi x Sour Diesel can do is increase anxiety levels especially when used beyond recommended levels. Most of the time, however, users only experience the inevitable dryness which shows up in areas like the eyes and the mouth. Though unavoidable, it is possible to manage the reaction by hydrating throughout the day.

At 12% to 13% CBD, the Luca Brasi x Sour Diesel cross is tough contender among the top strains in the medical marijuana industry. Meanwhile, its THC content improves its already immense therapeutic value with various properties of its own.

According to Washington State University, strains with high concentrations of both CBD and THC produced the largest reductions in stress especially after 10 puffs.  As such, it should come as no surprise that the Luca Brasi x Sour Diesel strain provides a mood-enhancing high that diminishes chronic stress which can develop into or aggravate health conditions like hypertension if left unattended.

In inspiring a sense of happiness from within, it also provides comfort to users with depression and other mental health issues like PTSD. At the same time, it reduces the fast-paced thoughts and overwhelming emotions caused by anxiety.

On the physical, Luca Brasi x Sour Diesel works as a potent analgesic. It alleviates various types of pain, including aches caused by inflammation, which invigorate users from fatigue or exhaustion. Meanwhile, its soothing buzz appeases headaches.

In the grow room, Luca Brasi x Sour Diesel has the distinct characteristics of an Indica with traits of its Sativa genes showing up in a few instances. It is a relatively tall that most people consider short as it fits in standard growing spaces. However, it may need to be topped early when the area is truly limited. Managing its height will also encourage lateral branching.

A great beginner’s strain, its sturdy stalks and branches have developed resistance to high levels of moisture in the air, lack of sunlight, and short hours of the day. Fazed by strong gusts of wind, the brave plant will stand its ground without falter. Applying the Sea of Green method will encourage the plant to flourish further.

During the flowering period, the strain yields dense flowers which are the size of popcorns. It is not completely dense though as it is slightly airier than the compact buds of other Indica strains. Still, it is covered heavily in a blanket of trichomes that twinkle like stars against a backdrop of deep green.

Aspiring growers are in luck as The Bank Genetics sells Luca Brasi x Sour Diesel in feminized form. This does not only make the growing process easier and, overall, faster but also assures a whole garden of calyx-filled females.

Thanks to Luca Brasi’s influence, its offspring has a short flowering time of 7 to 8 weeks. Once mature, it produces between 14 to 25 ounces of buds per square meter. Delaying harvest by a week will help the plant produce even more yields.

In the northern hemisphere, Lucas Brasi x Sour Diesel matures from the late September to the middle of October. It will yield at least 25 ounces of buds per plant.

Have you ever smoked or grown your own Lucas Brasi x Sour Diesel? Please let me know what you think about this marijuana strain in the comments below.