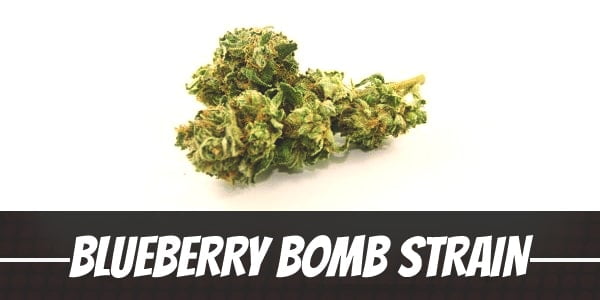 Blueberry Bomb bursts in the palate in an amalgam of tropical flavors. This indica-leaning hybrid entices the senses with its blueberry and orange-flavored terpene profile. Taking a swig off its smoke induces a light euphoria that clears the mind, calms worries, and raises motivation. Cradling users at the comedown is a relaxing buzz that caps the day off.

Palomar Craft Cannabis used Blueberry and Afghani as genetic bases. The two are Indicas that have wowed the world with its sturdy growing profile, heavy-hitting body effects, and mild euphoria. The breeders crossed the two using organic methods, free of synthetic fertilizers and harmful pesticides that affect the quality of buds.

Generations of interbreeding and hunting for desired traits, Blueberry Bomb was born. First-time growers may take advantage of its easy-to-grow nature. It exhibits a sturdy but manageable frame. Its yields are not only high, but each are dense, compact, and coated in thick trichomes. Not to mention, it is attractive – its blue and purple tint catching the eye – and will sell well if one does decide to move toward commercial growing.

Blueberry Bomb is a potent strain that exhibits between 16% to 23% THC. It delivers an almost instantaneous high that invigorates the mind and the body. So long as it is used in moderation, of course. Beyond personal tolerance levels, it can induce a heavy-hitting couch lock, as well as a mind race, that makes it difficult for users to stay calm.

With that said, the Indica-leaning strain can make for a great daytime companion. Its onset starts with a tingling sensation in the temples melts away worries, ironing out creases in the forehead as it replaces negativity by reinforcing positive thoughts. It instills an innate sense of happiness that improves the mood and uplifts spirits.

Gradually making its way down to the rest of the body is the initial rush of euphoria. It surges through the muscles and frees it of tension. Users may move around freely like a well-oiled machine while completing light physical tasks. Its soothing physical buzz intensifies that lulls one into a deep tranquility that makes for an end-of-day escapade.

Blueberry Bomb has a strong citric aroma similar to the freshly peeled oranges or squeezed blueberries. It has a sweet undertone that complements the earthy overtone that comes out after crushing or combusting the buds.

Blueberry Bomb, like a tropical shake, is an explosion of flavor. It bursts in the palate with a blend of blueberries and oranges. It is sweet with citrus overtones that tantalize and wake the senses. On the exhale, it leaves a rich earthy aftertaste.

Red eyes and a cottonmouth are two common reactions to smoking Blueberry Bomb. Cannabinoids in the strain inhibit moisture production, resulting in the dryness. It is manageable by staying hydrated throughout the day and avoiding caffeinated or alcoholic drinks.

Blueberry Bomb has significant therapeutic benefits that provide patients with relief against a variety of mental and physical health afflictions. Its uplifting high, for instance, alleviates stress by calming the overwhelming dread and worries that life brings. Similarly, users can also use it to manage symptoms of depression, anxiety, and other mental health issues like PTSD.

In high levels, the psychoactive compounds turn into a natural painkiller. It that appeases aches and pains all over the body, reducing tension in the muscles and preventing it from contracting. Its relaxing buzz also has anti-spasmodic properties that provide comfort to patients with Lou Gehrig’s disease, Isaac’s syndrome, fatigue or muscular dystrophy along with other diseases or disorders that with spasms as a symptom.

Palomar Craft Cannabis are master breeders of organic methods with years of growing experience. Hence, it should come as no surprise that Blueberry Bomb has an impressive growth profile. It has a sturdy frame and is easy to grow. Not to mention, it provides recreational and medicinal users with a good amount of buds to toke for the next few months.

A small to medium sized plant, Blueberry Bomb works best with the Sea of Green method which takes advantage of its height to maximize yields. The setup requires cultivating at least four plants in a single square meter then coaxing a single cola.

Pruning is essential as the foliage grows dense, inhibiting air circulation and light distribution in the lower nodes. Removing any dead branches or leaves also improves nutrient absorption of healthy budding sites. Apart from thinning out the plant, growers may also install proper ventilation system that will reduce excess moisture in the air and disperse its strong aroma, a fan to reduce the heat, and high-intensity lights to encourage bud production.

Growers may also opt to cultivate the plant in gardens and farms. The ample sunlight offers significant energy for the plants to foster more buds. As the seasons change and it gets colder, the mossy green plant and its buds produce specks of blue and purple. Indoor growers may mimic this by lowering temperatures as it enters the flowering phase.

After flowering for about 7 to 9 weeks, Blueberry Bomb produces between 10 to 12 ounces of buds per square meter.

Blueberry Bomb flowers from the last week of September to the middle of October. Growers can expect at least 12 ounces of buds per plant once ready for harvest.

What is the Blueberry Bomb strain yield?

Blueberry Bomb yields 10 to 12 ounces per square meter indoors and 12 ounces or more per plant outdoors.

How much THC does Blueberry Bomb have?

What are the origins of the Blueberry Bomb strain?

Blueberry Bomb was created from a mix between Blueberry and Afghani.

Have you ever smoked or grown your own Blueberry Bomb? Please let me know what you think about this marijuana strain in the comments below.