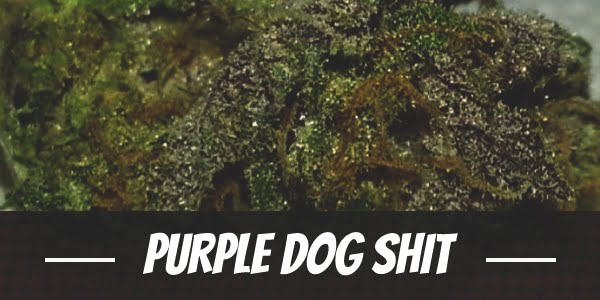 Dog Shit is often criticized for its pungent smell. After all, it does take its name from the sharp, putrid scent of dog turd its buds produce. Apart from that, it is an overall exceptional strain that has risen through the ranks for its strong cerebral effects and stress crushing buzz.

To enhance its scent, a group of unknown breeders crossed a purple strain with a delicious fragrance. And what better choice is there than Purple Urkle? A phenotype of Mendocino Purps, it boasts a flavorful blend of skunk, berry, and grapes. Adding it to Dog Shit also improved the latter’s ability to relax the body in full.

Compared to Dog Shit, Purple Dog Shit is not as repulsive. It is sweet and earthy with subtle notes of berries. Despite being predominantly Indica, it induces a stimulating head high that helps users stay mentally alert. It also has a soothing body high that allows one to kick back after a long day.

It is important to note that the strain has different phenotypes. Some of which have high CBD levels. In spite of the differences, each produce attractive buds that boast vibrant green, purple, and brown hues.

Purple Dog Shit’s effects are quick to set and last quite long. In fact, almost right after the first two or three puffs is an uplifting rush that swarms the mind with euphoria. It enhances the mood and leaves users feeling happier from within.

The mental clarity, along with an upbeat disposition, often lead to a surge of creativity. Thoughts flow and form smoothly into new ideas or to more innovative solutions. Completing tasks or projects becomes easier as users feel engaged in the brainstorming process. For its great wake-and-bake qualities, Purple Dog Shit can be used in the morning just before a grueling day at work. It can also be used early in the afternoon for added cerebral stimulation.

In time, the same uplifting buzz trickles down from the temples. It flows through the muscles in the soothing motion of waves until users are enveloped in a deeply unparalleled sense of relaxation. In all likelihood, those who overconsume the strain will feel incapacitated.

Purple Dog Shit inherited its descendant’s pungent fragrance. It is fruity, with obvious overtones of berry and a subtle tinge of grape. Crushed or combusted, it releases a skunky aroma that melds with undertones of wet soil as it fills the room.

Drawn in, the sweet flavor of overripe grapes and berries burst in the palate. Enhancing it are pleasant hints of mixed herbs which develop into a woody undertone as the smoke is savored. On the exhale, an aftertaste of wet soil washes over the mouth.

Purple Dog Shit seldom causes users to “green out.” Even so, with large amounts, it still has the propensity to increase anxiety levels. In addition, the strain may make users dizzy as the rapid onset can catch oneself off guard. Luckily, a quick way to stay on the safe side is to consume it slowly and practice moderation.

A more common side effect of Purple Dog Shit is dryness in the eyes and in the mouth. This is because cannabinoids interfere with the body’s natural ability to produce moisture. Though unavoidable, staying hydrated throughout the day will mitigate the discomfort.

Purple Dog Shit is no stranger to the medicinal marijuana community. Some of its phenotypes contain high levels of CBD that provide users with immense therapeutic value. Still, its other varieties are equally beneficial.

Its happy high, for example, is a source of comfort among users suffering from stress. It calms the mind and reduces the overwhelming feeling of anxiety. For this reason, it can also be used to manage symptoms of mental health issues such as depression or PTSD.

One of the best times to use Purple Dog Shit is right before a meal. It encourages a hearty appetite while easing the stomach of sharp pangs that often interfere with one’s ability to eat. As such, it is a great companion for patients suffering from anorexia or those with cachexia.

A natural painkiller, the Indica-dominant bud also relieves various types of aches in the body including those caused by over exhaustion from work. In doing so, it gets rid of fatigue and reinvigorates users through and through.

Purple Dog Shit is not difficult to grow. It is easily manageable because of its short stature. It is also quite sturdy with branches and stalks that are not easily swayed by strong gusts of winds. And, though it prefers a warm environment, it can withstand the cool and cold temperatures of many countries located in the north.

It may need some pruning though. Its compact structure sometimes harbors moisture which later develop into mold or mildew when left unattended. Applying special growing methods such as the Sea of Green, as well as Low Stress Training, will help the plant produce even denser buds, higher yields, and faster flowering time.

Indoor grown Purple Dog Shit takes 7 to 9 weeks to fully bloom. Once mature, it yields between 10 to 12 ounces of buds per square meter. Using the Sea of Green method, however, will encourage better yields at a faster flowering rate.

Garden or farm grown Purple Dog Shit usually flowers from the last week of September to the second or third week of October. Growers typically harvest a minimum of 12 ounces of buds per plant.

Have you ever smoked or grown your own Purple Dog Shit? Please let me know what you think about this marijuana strain in the comments below.