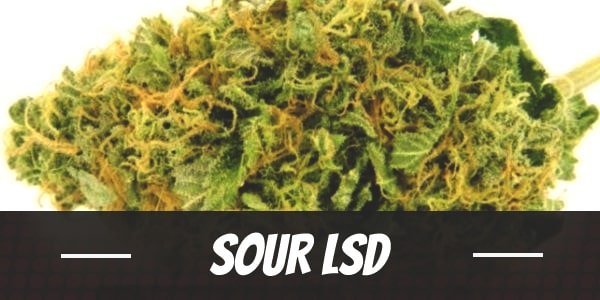 B.O.G. Seeds has a strong reputation in the cannabis industry. Not only for their award-winning strains, but as among the first companies that pioneered indoor growing. With over 40 years of experience under their belt, the Mom and Pop operation are now among the top selling breeders of quality seeds at reasonable prices.

Among their top strains is Sour LSD, a well-balanced hybrid with a THC averaging around 15%. It delivers a fast-acting head high that uplifts spirits instantaneously. Even during the comedown, its energizing effects emanate as users continue to stay productive after the high.

In creating the fruit-flavored Sour LSD, B.O.G. Seeds took its own Sour Bubble which is revered for its tranquilizing and medicinal effects. The breeders later crossed it with its own rendition of LSD for its quick flowering genes.

Sour LSD takes after its parent LSD in many respects. It delivers a rapid surge of energy almost immediately after the first two to three puffs. With the initial onset, too, is a rush of euphoria that leaves users feeling happy from within.

For casual users, the upbeat disposition transforms the workplace. Not literally, of course. Rather, in clearing the mind, it also sparks creativity. Free-flowing thoughts turn into new ideas and profound concepts.

Despite the hours that have passed, Sour LSD’s energizing effects remain felt throughout the body. It removes heaviness and tension from the limbs while relaxing the muscles so users can move without inhibition.

Due to the nature of its effects, Sour LSD makes for a perfect daytime smoke as a go-to by those who prefer taking a morning and afternoon hit. It adds energy users need to get through a dreadful day at work. Early evening consumption is also welcome. However, those prepping for bed may have to stay away from the strain as it can leave one wide awake.

Sour LSD has a pungent scent that is evident even from its airtight container. Rich notes of earth blend with sweet citric fragrance of lemons. Broken apart or combusted, it releases strong overtones of sour oranges as well as a spicy tinge.

Drawing in Sour LSD’s smoke is the best way to enjoy the full flavors of its terpene profiles. It bursts with the sour citric notes of lemons and oranges in the palate. On the exhale, it leaves an earthy aftertaste that make the fruity overtones seem freshly picked.

It is not uncommon for users to feel a little dehydrated while using marijuana. Its symptoms are most notable in the eyes and in the mouth where its cannabinoids mostly interfere with moisture production. Though the effects are mild, it is usually best to stay on the safe side by hydrating throughout and after the high.

In high doses, there is a slight chance of “greening out” when consuming Sour LSD. It can cause dizziness that potentially increases anxiety levels and lead to paranoia. Most of the time, however, users only experience a headache. Still, it is important to avoid the side effects by using the bud with caution.

Depression is a condition with many precursors. Chronic stress, for example, plays a detrimental role in one’s mental wellbeing. If unattended to, it can develop into or worsen other health conditions. As such, it is important to address its symptoms or find relief from stress.

To this end, Sour LSD works perfectly. It delivers an uplifting high that improves moods and temporarily stabilizes turbulent emotions which are symptoms present in both those suffering from chronic stress and depression. Though it helps users, the bud only temporarily alleviates the problems. Seeking professional help is still the best course of action for long-term management.

Sour LSD also has analgesic properties that appease pain and aches in the body. In doing so, it reinvigorates users from physical fatigue and encourages a hearty appetite.

Bred by pioneers of indoor growing, it should be of no surprise that Sour LSD performs well indoors. Not only that, controllable environments such as grow tents or grow rooms allows aspiring growers to adjust important factors such as lighting, temperature, and humidity to suit the plant’s needs at each stage.

Sour LSD also performs well outdoors where it thrives under the sun. It is also quite sturdy. Its strong stalks, as well as thick branches, have high resistance against fluctuations in weather and strong gusts of wind. The soil also brings out its flavors.

Sadly, Sour LSD did not inherit the mold resistant genes of LSD. For this reason, growers need to aerate the plant by either providing ample space in between seeds or trimming it often. Cutting away dead parts also improves nutrient distribution.

Sour Flower is an invigorating and creatively inspiring hybrid with sativa dominant effects. This strain is a popular one along the coast of California, as well as in Arizona and Oregon.

At the moment, Sour LSD is exclusively available in regular form. Growers may need to plant more seeds to raise the chances of producing female plants. Low-Stress Training, on the other hand, will keep calyx-filled females from turning into hermaphrodites.

Sour LSD has an indoor flowering period of 9 to 10 weeks. Under the expert care of a seasoned grower, it can blossom as early as 8 weeks. Regardless, it yields between 12 to 14 ounces of buds per square meter.

Garden grown Sour LSD flowers from the second to the last week of October. Once ready for harvest, it yields at least 14 ounces of more per plant.

Have you ever smoked or grown your own Sour LSD? Please let me know what you think about this marijuana strain in the comments below.