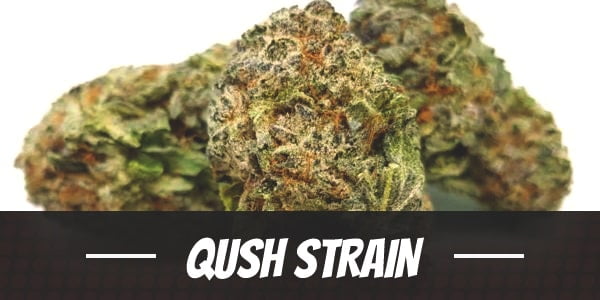 TGA Genetics is a trailblazer in the cannabis industry. Among the dozens of strains it has produced is Qush, an Indica-dominant bud with a heavy body high that entices users to take a break from their fast-paced lives. Not only that, it delivers a calming energy that reinvigorates a fatigued mind and body.

With so many strains in the market, it was not easy for the company to create an outstanding herb. Still, breeders achieved it by crossing two cannabis icons – Pre-98 Bubba Kush and Space Queen. The former influenced its offspring tranquilizing body high while the latter passed on its delicious fruity profile. Both, however, played a hand in developing Qush’s potency.

Sweet flavors dominate Qush’s terpenes, along with subtle notes of flowers and earth. Enhancing its appeal to a wide array of beginners and experienced users is its buildable high which ranges from 14% to 18% THC.

Qush does not shock users with an head-slamming high. Instead, it likes to coax the mind with a subtle uplifting buzz that intensifies over time as more puffs are drawn in. While many appreciate its slow buildup, beginners sometimes make the mistake of smoking too much until the bud induces a devastating couch lock. As such, it is best to start with low dosages and wait for its effects to kick in which is usually about 15 minutes after the first three to four puffs.

With that said, the initial onset is quite invigorating albeit nothing like the high-energy stimulation that other strains deliver. It is characteristically Indica, inspiring a serene sense of happiness from within. It spills all over the mind and leaves users feeling peaceful.

Gradually, the muscles ease up from tightness and tension until, soon enough, the urge to kick back manifests. Falling asleep while lounging on the couch is almost certain especially with high dosages. Because of it takes users to dreamland, Qush makes for a great bedtime treat.

Even before a bag of Qush is opened, sweet notes of cherry and grape fill the air. As it is broken apart or crushed, a combination of spicy hash come to light. Interestingly, combusting the buds releases a floral earthiness.

Drawn in, sweet flavors of cherry and grape rush into the palate. Lying beneath are subtle yet pleasing floral hints with a bit of earth. On the exhale, a sour aftertaste reminiscent of pineapple showcases itself.

Regardless of how it is consumed, Qush will always inhibit the production of saliva to some degree. Sometimes, the herb may also cause the eyes to dry or make a few people feel slightly dizzy during the onset of its high. Though the last reaction can be avoided through moderation, the first two are unavoidable. As such, it is best to stay hydrated all the time to ease the ache.

Presumably, Qush is mainly used for recreation. Still, this possibility does not take away from the fact that it also contains wondrous therapeutic benefits. After all, the same cannabinoids that induce its psychedelic high are responsible for the reprieve it provides to patients suffering from mental or physical health issues.

For starters, the herb’s calming cerebral effects calm the fast-paced thoughts of a person experiencing anxiety. In doing so, it also eases the overwhelming dread felt by chronically stressed users. Because of its spiritually uplifting buzz, it helps manage symptoms of depression and other mental health issues.

Physically, the same cannabinoids that stimulate the mind also increase appetites. Adding to its appeal is the analgesic properties it possesses quell various types of aches and pains that result from either treatment or injury. As the soothing effects continue, it envelops the body in total relaxation until users eventually fall into a deep, unencumbered sleep. An excellent bedroom aid, it addresses insomnia by enhancing the quality and quantity of rest.

As an Indica-dominant strain, Qush is a small plant with a stocky structure. Most growing spaces accommodate its size as it rarely exceeds 3 feet in height. It is also quiet sturdy and will withstand various environmental factors such as strong gusts of wind and fluctuations in weather.

It is an ideal strain to grow outdoors because of its hardiness. Still, growers may also cultivate it indoors so important factors like temperature, lighting, and heat are easily adjusted. Lengthening the vegetative period, and supplementing it with the Sea of Green method, will help increase yields. With regard to mediums, soil is arguably the best way to go as it increases flavor. However, a hydroponics setup will produce “cleaner” buds.

However, it may not fare so well against humidity. Its compact structure easily harbors moisture which can later develop into mold or mildew. Moreover, it has difficulty airing out due to its thick leaves and flowers. As such, it is important to trim and prune the plant regularly to improve air and light circulation.

At the moment, Qush is only available in regular form. For this reason, it is important for users to apply pre-germination methods to improve the chances of acquiring females. Meanwhile, Low-Stress Training techniques will keep the plant from turning into a hermaphrodite.

TIP: Buy seeds like Qush at my marijuana seed bank

Qush matures after 7 or 9 weeks of flowering. Growers usually harvest between 10 to 12 ounces of buds per square meter. However, it is not uncommon for experts to harvest more earlier.

Outdoors, Qush flowers from late September to the middle of October. Once ready for harvest, it yields at least 12 ounces of buds per plant.

Have you ever smoked or grown your own Qush? Please let me know what you think about this marijuana strain in the comments below.

BACK TO TOP
6 of the Fastest Flowering Strains You Can Find!
Area 51 Strain
Blue Galaxy Strain