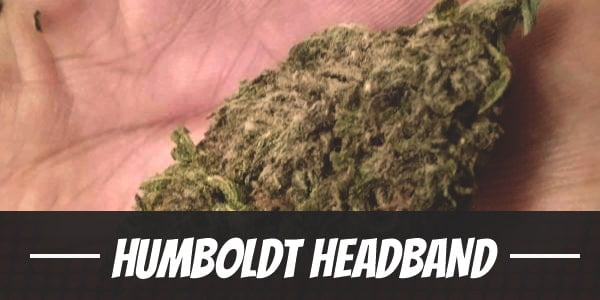 Humboldt Seed Company have built a reputation in the cannabis industry as master breeders that use illustrious genetics. One of its renditions is Humboldt Headband, a new take on the classic Headband.

Unlike its inspiration strain, Humboldt Headband leans heavily toward the Indica side. Not to mention, it has potent THC levels that range from 19% to 23%. Its bodily effects are very prominent while its head high is usually more complementary to the deep relaxation.

Humboldt Headband is not exactly a beginner’s strain. However, it can still be enjoyed if users consume it with a seasoned friend who can pace the bud and moderate dosage.

Humboldt Headband is an excellent strain to toke in the middle of the afternoon or early in the evening. It replaces the day’s accumulated stress with a calming cerebral high, while releasing tension from the body.

Enhancing the mood is an uplifting euphoria that raises spirits and energy levels. Thus, it should come as no surprise that there is a change in disposition. Users not only seem happier, but also more cheerful.

For casual users, the upbeat disposition turns the day around. Its ensuing clarity creates free a path for thoughts to flow freely, allowing it to form into ideas. A surge in creativity piques a wide array of interests while also sharpening the senses for better focus.

Easing the body after 20 to 40 minutes is a soothing sensation from the temples. It travels to the back of the neck then courses through the muscles, enveloping users in a deep relaxation. Although intense, the physical turns the body limber for better, more fluid movement.

Heaviness eventually settles in the limbs and drowsiness follows. The eyes close and users drift off to dreamland without

Humboldt Headband is a delicious strain that blends together the sweet aroma of grapes and berries. Tantalizing the senses is a soft earth that intensifies when the buds are broken apart. Accentuating it at combustion is sour lemon and diesel.

Taking a swig off of Humboldt Headband’s smoke, users immediately take note of a subtle but persistent sourness which can be traced to its lemon and diesel undertones. Accentuating it is the taste of sweet taste of grapes and berries. Although, on the exhale, it takes an earthier overtone.

Dry eyes and a cottonmouth are typical effects of Humboldt Headband’s moisture-inhibiting cannabinoids. It is not much of a problem, especially when compared to the possibility of becoming disoriented, dizzy, and anxious. It is usually the result of consuming too much of the strain, but one’s disposition before the high may also greatly affect its effect. Starting with low dosages and moderating use will keep one from greening out.

Humboldt Headband has uses that go beyond the recreational. It can work as an organic alternative to synthetic drugs and opioid-based painkillers. It may even be used as a sleeping aid to lull people with insomnia to bed.

Its uplifting head high is a source of reprieve among users undergoing chronic stress and experiencing its side effects. In this regard, the strain enhances the mood to melt away worries and calms the nerves. Similarly, because the symptoms are similar, it may also work as an anti-depressant to manage mental health issues like depression, anxiety, and PTSD.

THC, the compound responsible for its psychoactive effects, also has notable analgesic properties. It soothes various aches and pains in the body that inhibit movement. In its place, is an invigorating buzz that restarts one’s motivation.

In soothing the stomach, it also brings back the appetite. Thus, it is an excellent food companion for long-sufferers of eating disorders. Under the guidance of a health professional, it is possible to regain the lost weight.

Humboldt’s version of Headband leans more toward the Indica side of the spectrum. It is short, compact, and produces broad leaves that add depth to its thick foliage. Its buds exhibit a similar structure in that it is small, popcorn-shaped and heavy.

Naturally sturdy, Humboldt Headband grows well in different environments including indoor, outdoor, and in greenhouses. It fairs well due to its above-average resistance to common pests and diseases like mold. One thing to remember though is that it is only available in regular form. It requires pre-germination methods that will increase the likelihood of producing a female plant.

Growers have freedom to choose between different types of medium. If the goal is to improve flavors, using organic soil is the best choice. For faster growth rate and a shorter vegetative phase, hydroponics is an option.

As it enters the flowering stage, it exudes a stronger aroma that can overwhelm the nasal senses when unregulated. Installing a ventilation system with a carbon filter will reduce the odor and, at the same time, improve the circulation of air inside the growing area. Outdoors, it is usually blown over and dispersed by the wind.

After flowering for 7 to 9 weeks, Humboldt Headband produces between 10 to 12 ounces of buds per square meter. Breeders may enhance yields by subjecting the plant to advanced growing methods.

In the northern hemisphere, Humboldt Headband blossoms between the last few days of September to the middle of October. It produces at least 12 ounces of buds per plant at harvest.

Have you ever smoked or grown your own Humboldt Headband? Please let me know what you think about this marijuana strain in the comments below.