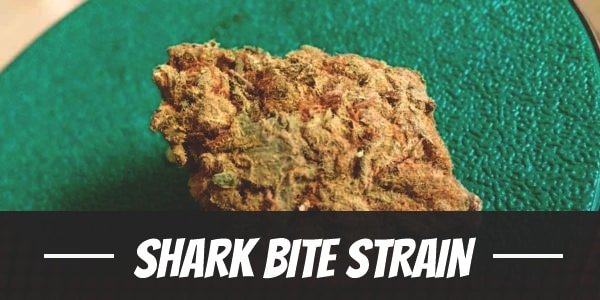 Great White Shark is an impressive Sativa-dominant strain. It has an uplifting buzz that zaps negativity in an instant. At the same time, its ability to clear the mind inspires a creative streak in enthusiasts looking for a break. Moreover, it has a short flowering period and a heavy trichome production.

Archive Seed Bank decided to cross it with a Face Off OG backcross to add sturdiness to its structure. Moreover, its heavy Indica buzz enhanced Great White Shark’s stress-crushing qualities. Its couch locking side effects are also mitigated by the latter.

Resulting from the cross is Shark Bite. Its balanced mix ensures users can choose between a soothing body buzz that is perfect for a relaxing night. Meanwhile, its stimulating head high provokes thoughtful thinking and creativity.

One thing to remember about Shark Bite is that it is highly potent. With THC levels to impress, its psychoactive compounds of 18% to 24% can overwhelm the mind. Beginners may want to use this strain under the guidance of a seasoned friend.

Shark Bite has a quick-acting high that delivers a rush of euphoria instantly after the first few puffs. Often, it uplifts the mood by filling the mind with happy thoughts. The mental clarity sharpens the senses and encourages users to focus on a task to complete. Not to mention, it creates free headspace for thoughts to flow, ebb, and form into groundbreaking ideas.

Its body high complements the raised motivation. Rather than a heaviness in the limbs, it is a light pressure that soothes the muscles and removes tension. Replacing it is a limber feeling that allows users to move like a well-oiled machine.

Its energizing buzz lasts for hours beyond the session. It helps users stay productive instead of lethargic. Because of this, it makes for an impressive wake and bake strain. However, enthusiasts must monitor usage as going beyond one’s personal tolerance can be unpleasant. Its instantaneous head high can lead to unpleasant side effects such as an overwhelmed mind.

Shark Bite has a pungent aroma due to its high levels of THC. It emits a delicious tropical scent that develops into a candied sweetness after breaking apart the buds. Combusting it, on the other hand, produces a fruity smoke.

In the palate, Shark Bite starts off as a subtle fruity overtone. Swirling the smoke in one’s mouth gradually develops into a tropical tang similar to that of sweet, freshly served shake. On the exhale, it leaves a candied aftertaste.

Dry eyes and a cottonmouth are two of the most common reactions to Shark Bite use. It is barely noticeable and is, therefore, often ignored. However, the discomfort of the long-lasting effects can be mitigated by staying hydrated throughout the day. Although rare, it is possible for one to end up feeling dizzy and anxious especially when using beyond personal tolerance levels. Moderation is essential in keeping the high pleasant.

Stress relief is among the best therapeutic benefits that come with using Shark Bite. It induces a soothing euphoria that improves the mood. It also calms the overwhelming dread caused by overwork.

In doing so, Shark Bite also manages the symptoms of mental health issues like anxiety, depression, and PTSD. It temporarily reduces feelings of hopelessness while also encouraging an upbeat disposition. Moreover, its productive high encourages users to feel better about oneself.

The same psychoactive compound also appeases aches all over the body. It starts at the temples, reducing the tension or headache that makes the forehead crinkle. kneads the muscles until it is relaxed to prevent sudden contractions which cause pain.

Shark Bite exhibits both Indica and Sativa qualities. It is relatively tall but easily manageable. Not to mention, its branches, as well as stalks, are thicker compared to other hybrids. Because of this, it works well in various growing conditions.

Although it prefers a temperate climate, Shark Bite has no problem growing in the cooler regions of the northern hemisphere. It will need protection against the extreme cold and snow which can kill the plant overnight or stunt its growth. Heavy rains may also pose a problem as it can break the branches off and growers may lose important buds. A temporary enclosing is usually enough to protect the batch against the harsh weather conditions.

Alternatively, growers can move it indoors where factors such as lighting, temperature, and humidity are easier to adjust. It will need to be pruned and topped to not only keep it short but also allow air circulation in the lower nodes. Pairing it with either the Sea or Screen of Green method will encourage bud production. The former maximizes space while the latter levels the canopy for better light distribution.

Mediums like hydroponics will double yields and hasten the flowering period. However, for growers looking to produce delicious buds, soil is a better option.

It takes between 9 to 11 weeks for Shark Bite to fully mature. It yields between 12 to 14 ounces of buds per square meter at harvest.

In the northern hemisphere, Shark Bite produces between the middle of October to the early days of November. Growers can expect at least 14 ounces of buds per plant.

Have you ever smoked or grown your own Shark Bite? Please let me know what you think about this marijuana strain in the comments below.