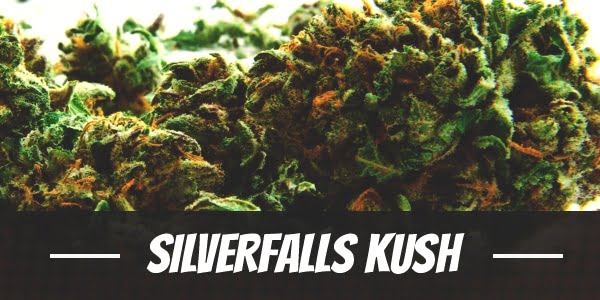 With a THC level of 10-15%, it is clear to many seasoned users that Silverfalls Kush is excellent for a wake and bake type of day. Its subtle rush of euphoria is a welcome break from the stress and dread that work induces. Complementing this is its soothing body high which releases tightness around the muscles for better movement.

Beginners, on the other hand, may find its effects to be exhilarating. It can make the mind race as hearts beat fast, especially when using it beyond moderation. Pacing, however, will keep the experience pleasant.

Silverfalls Kush may sound familiar because of Silver Falls, a state park located in the state of Oregon. However, apart from the lush greenery, the two have nothing in common.

Silverfalls Kush is a versatile strain with mild to above-average THC levels of 10% to 15%. It is an excellent beginner’s bud as one has full control over the dosage. Seasoned enthusiasts may increase the number of tokes, but still remain productive.

Its onset is a gentle rush of euphoria that calms a worried mind. Replacing the fast-paced troubles are happy thoughts that raise the mood. With an upbeat disposition, enthusiasts smile and laugh for the most minute reasons.

Users will likely get hungry too. The initial head high is also stimulating to the stomach. Thus, one of the best times to use this strain is before a meal around lunchtime or dinner. Having snacks prepared ahead of time will reduce the need to veer off one’s agenda to head to the kitchen.

After 20 to 40 minutes, a soothing buzz forms around the temples. It travels behind the neck then trickles down to the toes, kneading each muscle it passes. In all likelihood, users will want to snuggle on the couch in its blanket of relaxation.

Enthralling the nasal senses at the first whiff is the tantalizing aroma of strawberries blended with berries. Enhancing its sweetness are its sour undertones. Crushing then combusting the buds, on the other hand, reveals its earthy aroma accentuated by herbs and spices.

As delicious as it smells, Silverfalls Kush gratifies the palate with the sweet and sour taste of strawberries. It has a berry undertone with a hint of herbal spiciness that adds a subtle zing that awakes the senses. On the exhale, it leaves an earthy aftertaste.

Dryness is an expected side effect of Silverfalls Kush. It is most notable in areas like eyes and the mouth, especially once the moisture-inhibiting cannabinoids begin to interfere with the production of saliva. Usually, the two are accompanied by a mild dizziness that lasts for a few hours before disappearing.

Stress relief ranks high among the reasons why users choose to use cannabis. The same holds true for a strain like Silverfalls Kush. It has an uplifting high that melts away worries, clears the mind, and enhances the mood. Because of this, it works effectively as an anti-depressant as well. The happy hormones it induces manage symptoms of depression and other mental health issues like PTSD or anxiety.

Its THC content comes with natural analgesic properties that reduce aches and pains. It effectively minimizes the effects of fatigue, arthritis, and cramps by relaxing the body. As an anti-inflammatory, it reduces the appearance of redness while also soothing the inflamed area. This is also precisely why it contributes to the prevention of muscular contractions.

Most people become drowsy at the end. The heaviness weighs down the body until one is overcome by sleepiness. With its sedating properties, it enhances the quality and quantity of slumber to raise energy levels for the next day.

Silverfalls Kush is a resilient strain with impressive resistance to common diseases and pests. It is best grown outdoors where it can grow into a robust plant and soak up the nutrient-rich sunlight. Not to mention, the light breeze that blows over it increases the strength of its stalks. However, growers may also choose to cultivate it indoors.

Controllable environments offer leeway when it comes to adjusting lighting, temperature, and humidity. For instance, it is wise to switch to higher intensity HID lights with at least 600 watts and a 12/12 light schedule to accommodate the plant’s needs during the flowering period. With regard feeding and maintenance, there is little to no deviation from the standard gardening practices.

Experienced growers may want to apply advanced growing techniques. It performs well in both the Sea and Screen of Green. The former coaxes a single cola, while the latter focuses on creating multiple colas. Either way, the two growing methods will maximize yields.

One may also want to employ a hydroponics setup that will allow roots to absorb nutrients directly. As a result, it shortens the flowering period and can even potentially double yields. But if the goal is flavor, then an organic pot of soil is the best choice. It improves terpene production so the buds are more aromatic and tastier.

The flowering phase finishes in 8 to 10 weeks. Afterward, growers can harvest between 12 to 14 ounces of buds per square meter.

Growers from the northern hemisphere will see that flowers fully mature around the second or fourth week of October. It yields at least 14 ounces of buds per plant.

Have you ever smoked or grown your own Silverfalls? Please let me know what you think about this marijuana strain in the comments below.