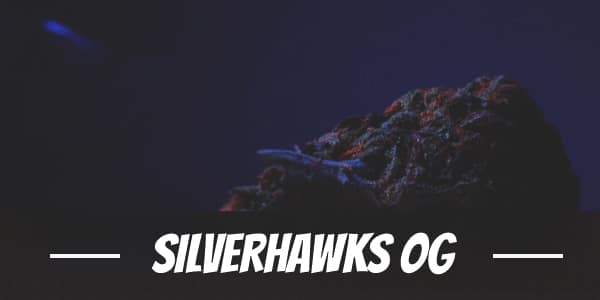 Silverhawks OG is an excellent daytime strain. Its funky smell alone awakes the senses, alluding to its potent high. Once consumed, it fuels users for the work ahead with its clarifying head high and energizing bodily effects.

Super Silver Haze is a three-time award winner with an impressive lineage. Reducing stress levels with its long-lasting, invigorating buzz is its best use, which it passes on to its offspring. White Fire Alien OG, on the other hand, is the opposite. It induces a calming tranquility that manages pain and reduces anxiety.

Their Sativa-leaning offspring offers the same reprieve to patients as well. Its uplifting high doubles as a source of relief against stress and depression. It also soothes cramps, aches, and pains.

Silverhawks OG is a quick-acting strain with potent levels of THC that averages between 20% to 25%. It delivers an exhilarating surge of energy that almost instantly refreshes the mind and invigorates the body at the same time. However, using it beyond one’s personal tolerance levels can leave users feeling stunned.

Pacing and moderation keeps the high pleasant. Instead of an overwhelming head slam, it is a gentle euphoric buzz that enhances the mood. In clearing away negativity and melting away stress, it allows users to bask in happiness without feeling rushed.

The behavioral change is accompanied by physical relaxation. It starts as a subtle tingle that courses through the back of the neck as it makes its way down to the toes. Untying knots in the muscles, the strain is best used when working on tasks that require exerting physical effort.

Using Silverhawks OG in the morning or early afternoon allows users to enjoy the full brunt of its wake-and-bake benefits. In the evening, it can keep one awake and restless. Unless, of course, one has some personal projects or work to tend.

Silverhawks OG is funky and pungent. It has a sour citric aroma that shocks the senses awake. Blunting its intensity is its undertone of earth which does not reveal itself until after users crush the buds. Upon combustion, a diesel-like smoke arises.

In the palate, Silverhawks OG’s diesel flavors take the stage. Making the face scrunch is its intense sourness before a note of wet soil balances out its initial profile. On the exhale, it leaves a citric aftertaste that lingers for hours after the last puff.

Red, irritated eyes are a common side effect of smoking cannabis. The same holds true for Silverhawks OG as its cannabinoids certainly inhibit moisture too. A rarer occurrence is dizziness and paranoia. Although the cause is usually rooted in overconsumption, one’s disposition before the high is a major factor too. Thus, users should be wary about consuming the strain on days where emotions run high.

Silverhawks OG benefits go beyond the recreational. It has an enriching buzz that relieve both mental and bodily afflictions. Its effects are further amplified once its cannabinoids and terpenes bind with the receptors in the endocannabinoid system.

Among its best uses is managing symptoms of stress. It clears away worries and troublesome thoughts, replacing it with a cheerful pleasantness. At the same time, it helps manage anxiety and PTSD which are mostly characterized by the same problems. The uplifting buzz also temporarily pushes back depression.

For the physical, Silverhawks OG offers a tranquilizing buzz with powerful analgesic qualities. It soothes the body, unclenching the muscles as it makes its way down to the toes from the temples. It frees users of headaches and prevents painful contractions caused by cramps. Meanwhile, the resurgence of energy staves off fatigue.

Silverhawks OG is an outdoor-loving plant. It loves to bask under the intense, but nutrient-rich light of the sun. Its above-average resistance against common pests and diseases allows it to flourish in gardens or farms in the northern hemisphere.

A tall plant, topping the plant early is essential to keep it short. Otherwise, it will continue to stretch until the growing area becomes cramped with its foliage. Pruning and installing a proficient ventilation system will help circulate the air.

It works best with the Screen of Green method which utilizes a screen, situated above the canopy, to create multiple colas. Growers will have to weave the branches into the net as it progresses into the flowering period. Doing so maximizes light distribution and evenly spreads it among the different budding sites. Not to mention, it helps keep t

Under optimal conditions, it will take Silverhawks OG between 8 to 10 weeks to fully flower. Growers can expect at least 10 to 12 ounces of buds per square meter.

Flowers blooms fully around the second or third week of October for Silverhawks OG. It yields 12 ounces of buds per plant once ready for harvest.

Have you ever smoked or grown your own Silverhawks OG? Please let me know what you think about this marijuana strain in the comments below.