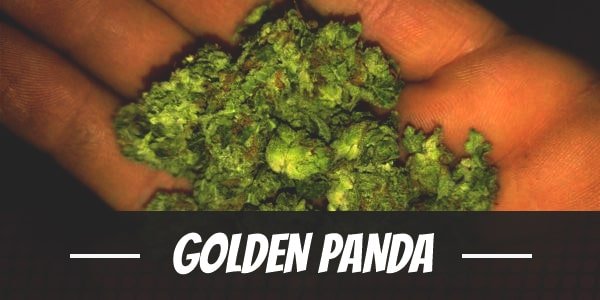 Golden Panda is a potent Sativa-leaning strain with above-average THC levels of 15% to 20%. Its smoke is exhilarating to the senses, giving users a hint of what is about to come. Consuming the buds enhances the mood, uplifts spirits, and eases worries.

Its lineage is made of gold. In particular, Golden Pineapple and Gold Nugget. The former has an inspiring head buzz with remarkable daytime qualities. The latter is an elusive strain that gets its name from its compact emerald nugs sprinkled with flashes of gold.

Medicinal users may also turn to Golden Panda for a break from the onslaught of mental and physical health afflictions. It has a soothing effect on one’s anxieties while managing the symptoms of stress and depression. It also reduces the intensity of chronic pain.

Quick to act, it only takes a few minutes for Golden Panda to hit. It starts at the temples before coursing through the back of the neck as it makes way down to the toes. Not only does it release tension from the muscles, it also improves the mood.

At the onset, the change in disposition is evident. Smiles are painted across the face as the high persists, lifting up the spirits and temporarily erasing worries. Users seem happier and upbeat.

Creativity ensues as Golden Panda continues to clear the mind. The extra head space allows thoughts to flow and form freely. It entices the imagination with fresh perspectives and innovative ideas.

The light pressure massaging the muscles intensifies after about an hour or two. However, it does not lock users to the couch. Instead, it makes the body limber so one can perform light physical tasks in the pursuit of tasks.

Golden Panda is best used in the morning or early afternoon as a wake-and-bake strain. It provides excellent company while working on tasks, raising productivity. Enthusiasts may still consume the bud at night when one burns the midnight oil.

Enthralling users is Golden Panda’s sweet fruity aroma. It is pungent, filling the nasal senses with its musk at the first whiff. There is an earthy overtone that eventually takes over after breaking apart the buds. Accentuating the initial tropical scent is a spicy note.

A toke coats the palate with the taste of blended tropical fruit. It is mostly sweet, accentuated by an undertone of spice. On the exhale, it leaves an earthy aftertaste that lingers for hours in the mouth.

Apart from the usual dry eyes and cottonmouth, it is possible for users to experience anxiety and paranoia while using Golden Panda. It can be the result of having a negative disposition, but the most common cause is overconsumption. Starting with low dosages and then pacing will prevent users from greening out.

Relieving stress is one of Golden Panda’s best uses. It has a euphoric buzz that clears the mind – melting away worries, calming the nerves, and uplifting the spirits. Its invigorating qualities also reduce the tiring impact of fatigue. In its place is renewed motivation and energy that allows users to move around with ease.

Similarly, it may also be used as an anti-depressant to manage mental health issues like depression, anxiety, and PTSD. Its tranquilizing head high quiets down self-depreciating negativity.

Its painkilling properties provide quick but holistic effects to users with chronic pains. It soothes various physical aches and pains by preventing uncontrollable contractions that tighten the muscles. In allowing the body to relax, it also appeases gastrointestinal pain. The result is a better appetite as the stomach processes food without problem.

Most likely, users will fall fast asleep once the deep relaxation settles in the limbs as a heaviness. Its sedating properties enhance the quality and quantity of rest, so patients wake up feeling energized the next day.

Golden Panda is a tall plant. It is best grown outdoors, where it can stretch and grow out its roots freely. Moreover, the sunlight helps it flourish into a big plant that produces yields vigorously.

Growers may mimic a Mediterranean-like climate indoors by using HID lights of at least 600 watts (either HPS or LED). Installing a fan and situating it at the top of the batch will help disperse the heat, so it does not burn the tips. Meanwhile, having a proficient ventilation system will help cool the room and remove any excess moisture in the air.

The Screen of Green method suits Golden Panda. It provides support for its thin structure, shortens the flowering period, and enhances the yield. The branches are woven into the net, which is installed on top of the current canopy. In this way, rowers can maximize light distribution since a single light source is spread out evenly.

It takes between 10 to 12 weeks for Golden Panda to fully blossom. At harvest, it produces between 12 to 16 ounces of buds per square meter.

Golden Panda usually takes a longer time to flower in the northern hemisphere. Usually, it can reach up to the second or third week of October. Thankfully, it rewards growers with a high yield starting at 16 ounces of buds per plant.

Have you ever smoked or grown your own Golden Panda? Please let me know what you think about this marijuana strain in the comments below.