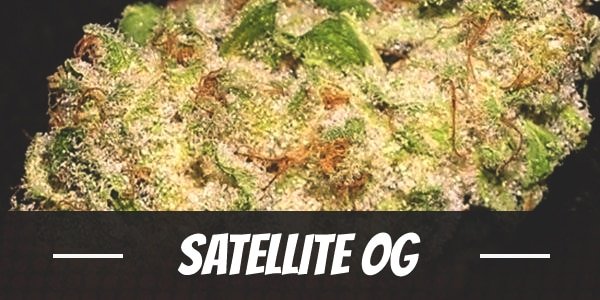 Regardless of the reason, Satellite OG is aptly named. Not only are satellites high up, they allow those here on earth to function better. In the same manner, the bud’s clearheaded high keeps users productive and soars them to new heights.

An Indica-dominant hybrid by breeders Satellite, it combines the genetics of two legendary strains SFV OG and OG Kush. The former is a Sativa-dominant strain with amazing medical benefits that are second to none, while the latter is a legend among the West Coast varieties for its great performance in the grow room as well as potent Indica effects.

One of the best traits Satellite OG earned from its parents is its long-lasting cerebral high. But, that is not all. The high THC levels of the bud also mitigate a variety of afflictions. As such, it is not only appealing to casual users but to the medical community as well.

Though Indica leaning, Satellite OG’s effects start with a euphoric high that invigorates the mind. Rushing through immediately after is a sense of happiness that clears away negativity. In better and lighter moods, many find themselves smiling and giggling at every little thing.

In a work environment, the clearheaded high allows the casual user to brainstorm. With a heightened sense of focus, generating profound solutions and innovative ideas becomes an easy task. And, with an upbeat disposition, projects seem to go by smoothly and quickly. Although, some may also use it to meditate on some introspective thoughts.

Barely noticeable throughout the psychedelic high, though, is a creeping Indica buzz. Gentle at first, it soon catches the user off guard once it ebbs down from between the temples. Through and through, the uplifting sensation soothes the body and sneaks a heaviness into the limbs. Gradually, it envelops the user in total relaxation.

Despite its prominent Indica qualities, Satellite OG does not sedate until after the high. When used in moderation, it simply eases the body in order to move around better. Because of this, the bud can be smoked at any time of the day.

Satellite OG smells like candied blueberries. Underneath the sweetness is a fragrant blend of earth and the woody scent of pine. Once cut up, the buds release a spicy odor.

Satellite OG tastes as candy-like as it smells. Each draw brings out its fruity profile of sweet blueberries. On the exhale, a cooling mint and refreshing pine wash over the palate.

Like other strains, Satellite OG comes with dehydration. In inhibiting the glands that produce moisture and saliva, it is almost sure to cause a cottonmouth. Some users may also experience red eyes. Though both are often mild, it is best to keep hydrated.

At times, Satellite OG can induce a slight dizziness, especially as its potent effects slam the body in its entirety. However, for beginners, the experience may be totally different. Instead of a headache, the heightened awareness turns into mild paranoia.

Though presumably for recreational use, Satellite OG’s high THC levels can be a source of comfort for medical users. For one, it is a natural painkiller. In moderate doses, it relieves the body of aches starting from the head. Its soothing buzz also appeases spasms – especially in the stomach, where the presence of a sharp stinging sensation can possibly inhibit the appetite. The latter is often a common symptom of anorexia, cachexia, and even cancer.

Apart from the physical, the relaxing qualities also benefit the cerebral. Together with the bud’s uplifting high, the bud calms the mind and uplifts it. This only provides comfort to those going through mental illnesses like depression and PTSD, but it also appeases anxiety. Having a clear head also helps users with ADD/ADHD temporarily regain control over their ability to focus.

Satellite OG is truly an Indica plant. It is not only short, but also sturdy. Its buds, though, are quite large. Not only that, they are dense and extremely compact. Stunning growers is its foxtail-shape and lively forest green colors with golden undertones. Amber hairs and trichomes cover the nugs all around.

As a commercial strain, Satellite OG is likely grown indoors. Doing so not only allows its breeders to maintain its chemical profile, it also gives them control over important factors such as lighting, temperature, and humidity. This is not to say that the plant does not grow well others. No, nothing can be farther from the truth. A natural environment allows it to thrive and produce even bigger buds with calyxes that drip in resin.

Unfortunately, the seeds of Satellite OG have not been made publicly available yet. However, growers may still cultivate the hybrid by acquiring clippings from a mature plant.

Growers typically harvest anywhere between 10 and 12 buds per square meter after 7 to 9 weeks of flowering. Applying the Screen of Green (SCROG) method, however, will increase yields.

In sunlit environments, Satellite OG should finish flowering before September ends. However, in areas with unpredictable weather, it may take a little longer; up to the second or third week of October, to be exact. Regardless, the wait is well worth it especially as each plant is known to produce at least 12 ounces of trichome-frosted buds.

Have you ever smoked or grown your own Satellite OG? Please let me know what you think about this marijuana strain in the comments below.