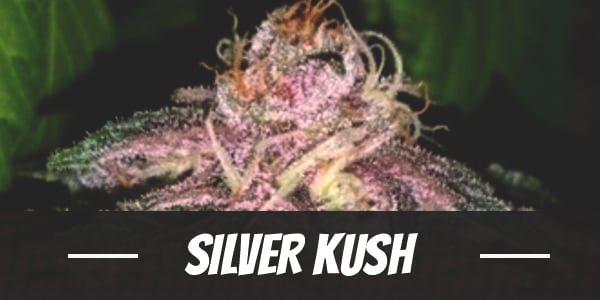 Reserva Privada, a label of DNA Genetics, dedicates itself to creating premium strains. Among the ones they bred were the award-winning Silver Bubble and The OG #18. And, in crossing these two, the result is a potent hybrid that they named Silver Kush.

Silver Bubble itself has been out in the market for over a decade. In all these years, it has proven itself to be a reliable companion for a balanced high. A quick look at its genetics reveals why it became a stable in the Dutch marijuana scene; this strain is an offspring of three legends – Haze, Northern Lights, and Skunk.

It is hard to find fault in Silver Bubble, but DNA Genetics decided there is one area it could improve on – therapeutic benefits. The OG #18, for this purpose, was perfect. Its ability to deliver a sedating body high is beyond compare. Apart from relaxation, it also is capable of relieving pains.

In developing Silver Kush, the breeder was able to succeed in retaining the exceptional cerebral high that can only be brought on by the Haze lineage while increasing its pharmacological value.

Silver Kush is for people who revel in cerebral buzz but do not want the backhanded overstimulation. It begins with an uplifting and clear-headed high. Any self-doubt and negativities melt away, and in its place, a sense of happiness and well-being takes over. These effects are profound and increase awareness of the surroundings. Along with heightened sensitivity is the ability to lock in and focus on particular ideas or tasks.

During this time, the upbeat and cheery disposition can turn one into a social butterfly. Even when alone, some people could have bouts of giggles at seemingly no reason at all.

Once the physical effects kick in, though, Silver Kush can slow down users. As heaviness sets into the body, tensions leave the body.

Silver Kush may lean towards the Sativa structure, but its Indica properties are not lacking. In fact, most people tend to feel lazy during the comedown. And, if one were to overindulge, then it has the potential to glue users to the couch.

Silver Kush has an earthy odor accentuated by a refreshing minty scent with an herbal quality. Its pungency becomes evident after crushing the bud as it releases a spicy note.

Silverhawks OG is an excellent daytime strain. Its funky smell alone awakes the senses, alluding to its potent high. Read our full review!

Silver Kush Boasts of smooth smoke. Once drawn in, a blend of citrusy and lemony flavor that is reminiscent of The OG #18 bursts into the palate. Further enhancing its flavor profile is the taste of sweet berry. And, on exhale, it leaves a delightful minty aftertaste.

Unfortunately, there are some adverse effects associated with Silver Kush. Not that it is a deal breaker as these are typical with the use of marijuana. For example, users can expect to have dry mouth and eyes. In some cases, some people may even feel dizzy or have a mild headache. Also, the strain has the potential to make some people feel a bit paranoid.

On its pharmacological value, Silver Kush benefited from The OG #18 tremendously. In delivering both uplifting mental and relaxing physical effects, most people use it as a reprieve from stress. It has also shown an uncanny knack in helping users cope and manage depression and other conditions such as PTSD. For a brief moment, it also benefits people with ADHD by improving the ability to focus.

Silver Kush comes with analgesic-like characteristics. As such, it excels at managing the sharp stinging pain brought about by muscle spasms. Its anti-spasmodic properties relieve involuntary contractions that are prevalent in seizures and epileptic episodes. Meanwhile, its relaxing effect helps cut down mental and physical fatigue.

Besides enhancing its offspring’s therapeutic value, The OG #18 also influenced the quick flowering period and high-yielding qualities of Silver Kush. Even though it may need some extra love and attention, the plant remains easy to cultivate and is one of the better choices, especially for beginners. One reason is that it is available in feminized seeds.

Compared to feminized seeds, the chances of males mixing it up is almost none. That is now to say that growers should not be mindful, though. To encourage the growth of lateral branches and consequently have a higher yield, one thing that cultivators can do is to apply LST or low-stress training. Here yet is another benefit of Silver Kush in feminized seeds. The plant has no hermaphroditic tendencies.

Inside a greenhouse or for most people, the house, it takes around nine weeks for Silver Kush to flower and be ready for harvest. For every square meter, it can produce up to 19 ounces.

In the Northern hemisphere, Silver Kush should flower by mid-October with each plant producing at least 15 ounces of buds.

Have you ever smoked or grown your own Silver Kush? Please let me know what you think about this marijuana strain in the comments below.