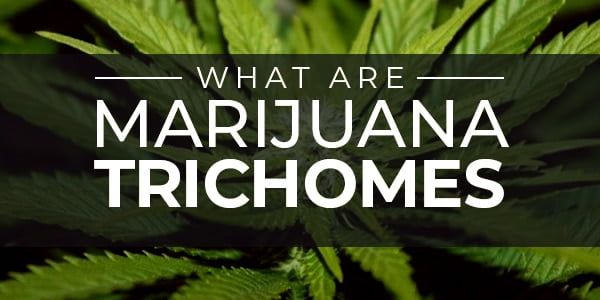 When most people think of cannabis, they think of leaves and flowers. Those are the most obvious part of the plant, absolutely, but they aren’t actually the most cannabinoid-heavy bits. No, the place to look for THC on the cannabis is the trichomes.  Never heard of them? Read on.

In this article we will learn the following about Marijuana Trichomes:

If you’ve ever looked at a cannabis flower, you have probably noticed that it looks a little, say, fuzzy. This is due to the trichomes covering the plant. Trichomes are little “hairs” that many plants grow to deter insects and other pests from eating them or growing on them. Peaches are covered in trichomes, for example, as are kiwi fruits. The sticky hairs that are found on Venus Fly Traps are trichomes, too! The fuzz on a cannabis plant doesn’t quite look the same, of course, but it’s the same type of structure.

The trichomes that grow on cannabis plants are useful for more than just their pest-repellent qualities, however. To be fair, the strong scent and bitter flavor keep most animals from eating the flowers, and the trichomes can even deter some kinds of fungus. However, the most important aspect of a trichome to a cannabis grower is what makes them bitter and scented. The sticky substance found on the trichomes is a combination of cannabinoids and terpenoids – all the good stuff.

Different strains of cannabis grow trichomes in different amounts and have trichomes of varying efficiency. A strain with many trichomes may not be the most efficient producer of cannabinoids and vice versa. The environment can also affect this – increased UV light, for example, can greatly increase the amount of terpene and cannabinoids the plant produces. The broader the light spectrum the plant experiences, the higher the cannabinoid concentration in most cases.

How to Use Trichomes in Your Growing

So now you know what a trichome is. It’s all very interesting, isn’t it? However, a fact just being generally interesting doesn’t help you grow better plants. Why are trichomes useful to cannabis growers?

Simple. The easiest way to tell whether cannabis is ready to harvest is by checking out how the trichomes are doing. Trichome health and appearance is directly linked to the state of the cannabis plant they are on. By keeping an eye on how the they are doing, you have a good idea of how healthy your plants are, and how close to harvest time you are.

The color of the trichomes changes over time, from clear to opaque white to amber. Most growers prefer to harvest when the plant has as many opaque white trichomes as possible because the color is caused by THC. The amber color is a sign THC is breaking down into cannabinol, which is still useful, but not a primary trait many people are looking for in their cannabis. Of course, some will start to turn amber before others turn white, so you must use your own best judgment.

The good news is that once you have harvested them, you can store them more or less indefinitely if you’re careful. Keeping them away from light and heat is the most important aspect of storing trichomes. Kept in a cool, dry place, they will stay good and maintain their THC content for years.

Trichomes turn amber for many reasons, including exposure to heat, light, oxygen, and physical agitation. It’s impossible to avoid all of these, but careful handling and caution with your growing conditions can keep your trichomes in good condition for as long as possible.

Tip: make sure to download my free Grow Bible to learn more about the best growing conditions!

How are Trichomes Used?

Trichomes are actually the basis of kief and hashish. Carefully harvesting them is the easiest method to get lots of quality cannabinoids and terpenes quickly.

By carefully dry-sifting using several sheets of fine mesh stack on top of each other, you can separate the trichomes from the flowers. These trichomes, once they are separate and dried, are now called kief. Many people find they acquire some kief simply by storing bud in the same container for a while. The powder at the bottom is an impure form of kief because it has other parts of the plant in it as well.

Kief has plenty of uses, as you may well know. One useful thing to do with kief is creating hashish. This is done by compressing the kief and using heat to help it stick together. The heat and pressure darken the kief from a light green-brown to a much darker brown, depending on how much heat is used.

Trichomes are some of the most important parts of the cannabis plant, and they deserve to be better known. Their utility as the most concentrated producers of cannabinoids makes them useful for recreational and medicinal users alike. In your growing, understanding what trichomes are and how to harvest and keep them will pay dividends in the long run. You’re investing in your own knowledge of the plant – which in the end, will surely pay off.

Be sure to get your seeds before the season starts. Check out my seed bank for the best Marijuana seeds out there!