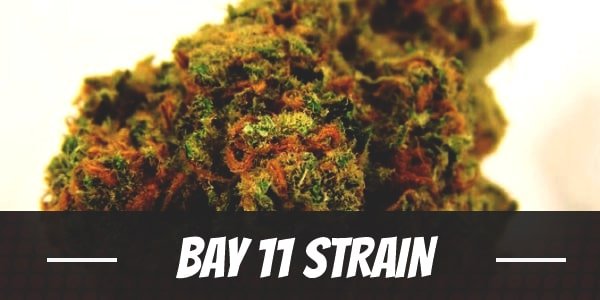 There are plenty of reasons for Grand Daddy Purp to be proud of since their founding in 1993. Ken Estes has had success in developing strains that are proving to be valuable to the medical cannabis community for a long time. One of the hybrids was Bay 11. In 2011, it won the High Times Cannabis Cup, proving that it is one of the best strains ever created.

To develop this strain, Ken used a hybrid he earlier developed called Ken’s Kush. It is a cross between Granddaddy Purple (yet another hybrid developed by Ken) and two legends, OG Kush and Sour Diesel. Among its most notable traits is the dreamy body relaxation without the typical heavy sedation of potent Indica plants.

Ken’s Kush was then paired with Appalachia, a strain sought after for its dreamy cerebral buzz complemented by full-body relaxation.

Although they he did not disclose any other information regarding the crossing, it must have taken quite an extended period of time to squeeze everything it can to provide benefit to medical users.

By winning the High Times Cannabis Cup, it served notice to the world that it belongs to the upper echelons of cannabis strains that recreational users, as well as medical users, can use. It is also a testament to its rich and renowned heritage in its genetics.

Bay 11 comes with a high amount of THC. It is also a fast-acting strain that takes effect almost as soon as the first toke. It begins to manifest itself with a tingling sensation, mostly on the face and the neck. It then progresses to clearing the head and letting the creative juice flow. For many people, it also amplifies their senses as the mind and focus become sharper.

We don’t currently sell the Bay 11 seeds. Check out other Hybrid seeds in our marijuana seed bank.

As this goes on, Bay 11 starts inducing an energetic buzz that not only uplifts the mood. It also motivates the users to be productive while feeling an overwhelming sense of happiness.

Soon, a warm buzz trickles down from the neck down the spine and to the body. Users start to feel tensions vanishing and sore muscles relaxing. Compared to many others, the full-body relaxation induced by the strain does not have the same level of sedating effects. As a result, most people are able to stay active without a hazy mind. There is none of the spacey or narcotic-like effect or lethargy.

Some people also reported that Bay 11 can increase their sexual desires. Keep in mind, though, that the strain itself can become overbearing when using too much. In this case, the chances are high that users may end up in a couch-lock.

Bay 11 comes with a refreshing scent of earth and pine. It also has a sweet and fruity note blending in which makes it more than pleasing to the users.

Like how it smells, Bay 11 also has a sweet and fruity taste to go along with its piney flavor. Its smoke is rich and smooth with a citrusy aftertaste. The strain is a delight to use as it is easy on the throat and the lungs.

Users of Bay 11 can expect some adverse effects to occur when using it. Such is common with using cannabis anyway. It can cause cotton mouth and dry eyes, as any experienced cannabis users should know.

For all the benefits that it gives to recreational and medical users, using it too much may cause some people to feel anxious or have a headache. The severity of these conditions depends on a few things. One is the susceptibility of individual users. Another is the amount used. Finally, it could also depend on the physical conditioning of users.

We don’t currently sell the Bay 11 seeds. Check out other Hybrid seeds in our marijuana seed bank.

The euphoric and uplifting buzz generated by Bay 11, as well as its full-body relaxation, is more than capable of swinging the mood. Its ability to induce happiness makes it invaluable to people with depression and stress. For the few hours that it is in effect, its users can find peace and comfort as well as think of positivity rather than crumble under the pressure of daily life and problems. In a sense, it becomes a temporary sanctuary where users can take a step back to relax and come up with a plan of action.

Other uses of Bay 11 include providing comfort to people going through chronic illnesses. It can act as a pain reliever for mild physical discomforts.

Bay 11 thrives in both indoor and outdoor environments. From all indications, it is also considered to be friendly to beginners in planting or growing marijuana. Once it reaches maturity, growers can then pick its beautiful green buds covered with amber to milky crystals.

Because it grows more like a Sativa plant, it requires growers to top it and keep trimming to not only keep it short but also to encourage more lateral branching. Flowering time is in 9 to 10 weeks with each square meter producing a whopping 31 to 39 ounces of buds.

In the open, Bay 11 can reach as high as 10 feet tall. Provided that it is in a warm climate, flowering time should occur in the last days of October. Under expert care, each plant can produce an astonishing amount of buds, often as much as 81 ounces per plant.

What is the Bay 11 strain yield?

How much THC does Bay 11 have?

What are the origins of the Bay 11 strain?

Have you ever smoked or grown your own Bay 11? Please let me know what you think about this marijuana strain in the comments below.