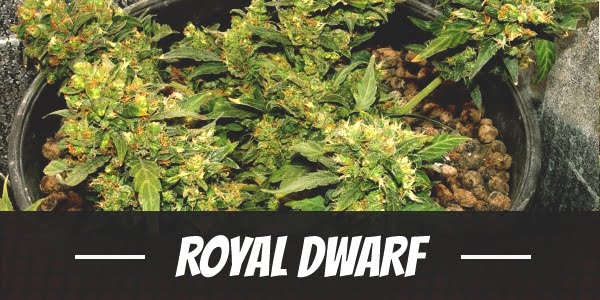 There is a reason for its name Royal Dwarf. First of all, it is really a compact plant even if planted outdoors as it grows up to only 3 feet tall. A big factor for that is its having Ruderalis heritage in its genetics. As for the reference to royalty, that is because it is truly a small but terrible strain when it comes to its effects.

Of course, whenever we say terrible, we do not mean it in a demeaning way. Far from it, the Royal Dwarf is a deceptively powerful hybrid that should induce a heavy relaxation. But use more of it, and it can easily knock out people. Bred by Royal Queen Seed, this auto-flowering plant is especially suitable for beginners. That is not to say that seasoned users or those who simply want a heavy hit is not going to get one.

While most cannabis hybrids on the market are either descendant of pure breeds or mixed Sativa/Indica strains, Royal Dwarf is different in that its genetics contain an unknown Ruderalis plant. As such, it retains much of its Sativa heritage taken from Skunk No. 1 and a smaller Indica side, plus the Ruderalis genetics.

The decision to introduce Ruderalis in its DNA appears to be based on the plant structure. To that end, credit goes to the breeder who has successfully developed a naturally short strain that makes it easier to cultivate especially in an indoor setting.

Royal Dwarf comes with around 15% THC. Deemed as very potent, it does pale in comparison with many other modern strains that now have 20% or more. Still, one must never forget that it packs a punch.

At its onset, it delivers an uplifting sensation that leads to an overall sense of happiness. It also comes with an energetic buzz, albeit a milder one compared to Skunk No. 1, but nonetheless, is still pronounced. As the physical body high creeps in, users may also experience a tingling sensation. For some, it may also result in sexual arousal. At this point, this is as gentle as the strain can get.

Once the body high kicks in, it does so fast and hard without warning. Although it may start slowly, once it does, it often leaves users heavily stoned. It is for this reason that users should try to use within limits.

Much of the Skunk lineage is evident when it comes to its fragrance. Royal Dwarf has a very sweet odor and a blend of earth and skunk. Like its predecessor, most people should find this exotic scent more than pleasing enough.

The same scent it emits is evident in its taste. It also has a woody note upon exhalation.

No matter how one puts it, cannabis is still cannabis. It means that with all the benefits that a strain can provide, it does come with a few reactions that may be unpleasant. Fortunately, Royal Dwarf seems to have less of these adverse effects compared to the vast majority of others.

Cottonmouth is unavoidable as most people who use this strain is bound to experience it with varying degree of severity. For most, the symptom is too mild to even be bothered. However, it does become more pronounced as users use more of it.

Even if the strain induces a mild cerebral euphoria, it is the strong body buzz that can cause a few people to feel a little dizzy.

Anytime a strain can cause a euphoric feeling that is complemented by physical relaxation, it does one thing exceptionally well. Strains with these traits are very good in crushing stress. Considering that it can alter the mood of users and induce happiness, it becomes a useful aid in fighting off depression.

Aside from psychological or behavioral benefits, Royal Dwarf is also a good pain reliever. At least, it is effective for mild pains and aches. Unfortunately, it is not useful for the treatment of chronic illness that responds to CBD as it has a very low amount.

As alluded to earlier, Royal Dwarf is a very short and compact but bushy plant. Growers should find it easy to tend to make it an excellent strain for beginners.

While it can be grown in the backyard or the garden, it thrives especially well in an indoor setting. Even if it is small, it is also surprisingly a generous producer.

Generally, its flowering time should be around 7 to 8 weeks. However, grow Royal Dwarf using hydroponics, it could be as early as 6 weeks. Because it is easy to keep it shorter than 2 feet, using training techniques such as Sea of Green may not matter as much. Once ready, growers can expect to pick up around 5 to 7 ounces of buds.

Generally, the flowering time of Royal Dwarf should be around the early part of September. However, because it is an auto-flowering plant, that means growers can cultivate it all year round. Typically, each plant can produce up to 3 ounces of buds per cycle.

Have you ever smoked or grown your own Royal Dwarf? Please let me know what you think about this marijuana strain in the comments below.