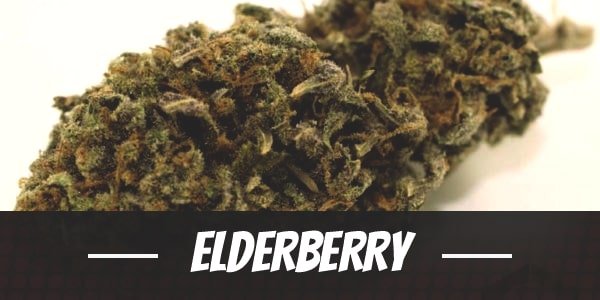 Elderberry (also called Elderberry Kush) is a strain that brings users up to cloud nine before taking them back down to paradise on earth. Bred by Green Devil Genetics in Spain, it grows like typical Indica plants, which means it has a quick vegetation period. Even better, it produces an abundant yield.

One of its parent strain is Dojaberry (also spelled as Doja Berry). Not much is known except that it is Sativa-dominant. It brings on a euphoric high and complemented by a numbing body buzz.

On the contrary, the other parent strain Edelweiss No. 3 is quite popular. This hybrid took its name from the white flower that grows on the Swiss Alps. That is because of the similarities in the white coating on its leaves and star-shaped leaflets around the bulb. It is notable for its heavy and stoney effects that can lead to a couch-lock.

Using these two strains, the breeder successfully took the best traits of the parent strains. Instead of producing a high on either side (mental or body), Elderberry first brings users up before bringing them down to a relaxing bliss as alluded to above. In more ways than one, it brings exceptional experience for the recreational users. As for the medical cannabis users, it is also able to provide the much-needed relief from discomforts.

Elderberry starts by delivering a sensational yet gentle euphoric buzz to the mind and the body. Early on, most of its effects are cerebral with users feeling uplifted. Such mood-alteration leads to cheerfulness so that in any gathering, people using it tends to become more sociable. Expect to have bouts of giggles and laughter too. Used in a small amount, the hybrid makes for an exceptional party strain.

In time, the body buzz begins to become evident. It is not likely to cloud the mind though even as it starts to induce a full-body relaxation. However, it should be noted that this is a very potent strain with up to 24% THC. In other words, people who use it beyond their limitation will find themselves in a couch-lock. As such, the best use of the strain is during the evening.

Elderberry is true to its namesake in as far as its aroma is concerned. Amidst the earthy smell, it comes with a fruity note of blueberry with a flowery hint. It is amongst the better smelling cannabis that one can get ahold of among the thousands of strains currently in the market.

As delightful as its aroma is, it is equally impressive when it comes to its taste. A sweet note accompanies the fruity blueberry flavor, one that is sure to delight anyone who ever inhales its smoke.

There is a lot of reasons why Elderberry is an excellent strain. However, it does come with the usual conditions that some people may experience. For instance, dry mouth and eyes are to be expected. It is, of course, not a big deal.

However, some people may also feel dizzy especially at the onset of the buzzing cerebral high. In some instances, too, a few may even feel a little more anxious.

Such adverse effects become more pronounced as users consume more than they should. While it does not pose any long-term health risks, it can be uncomfortable for some people. Generally, though, these reactions are too subtle to become a dealbreaker.

Among the top reasons for using Elderberry by the medical cannabis users is in its pain-relieving trait. It does so by the combined effects of its Sativa and Indica sides. Psychologically, because of the euphoric buzz, it takes the mind away from pain. On that alone, people with mild pain tend to forget about their discomfort. It is further aided by the intense body buzz that not only soothes the muscles but also helps release the tensions from the body.

As mentioned earlier, used in moderation, Elderberry becomes excellent for socializing. Indeed, the energetic buzz that comes with it is enough to keep people on the go. As such, it can be quite competent in battling fatigue.

One of the noticeable effects of using the strain is an improvement in appetite. People who have been trouble and needs a little booster will find a good use for this hybrid.

Careful, though. Remember that it can put people on a couch-lock if using too much.

Elderberry thrives equally well inside the house or out in the backyard or garden. It appears though that it produces a more stable yield if planted indoors. The availability of its seeds, though, remains limited at this time.

Because of its more Indica-like growth, Elderberry has a flowering time that begins in the seventh week. Once it is ready for harvest, it can produce a yield per of 14 to 18 ounces per square meter.

It seems that the best climate to cultivate the strain is in a warm environment. Depending on the experience level of growers, it can produce as low as 11 ounces or up to 19 ounces of buds per plant. The flowering time should occur during the first couple of weeks of October.

Have you ever smoked or grown your own Elderberry? Please let me know what you think about this marijuana strain in the comments below.