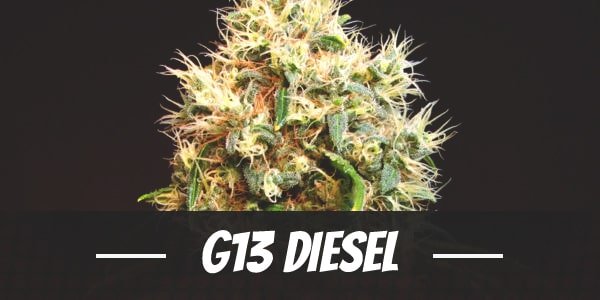 Believe it or not, there are more Indica or Sativa leaning strains in the cannabis industry than there are hybrids. G13 Diesel is one such strain, a perfectly split plant that brings out the best of both worlds together.

In creating such excellence, Head Seeds used G13 for its excellent Indica effects. It was also chosen for its great growth profile and dense buds. Later, the breeders added in East Coast Sour Diesel for its distinct aroma and vigorous Sativa structure.

G13 Diesel is what Head Seeds considers a ‘prodigious offspring.’ Apart from being sturdy, it boasts impressive THC levels ranging between 17% to 24%. Not only that, it provides relief to patients from the medical marijuana community.

G13 Diesel’s effects begin almost immediately after the first two or three puffs. It introduces itself as a surge of energy that reinvigorates the body through and through. Beginning with the mind, of course.

During the initial onset, a euphoric rush swarms the mind and leaves users feeling happy from within. The upbeat disposition transforms the workplace. Not literally, of course. Rather, it enhances focus so tasks are finished on time.

Gradually, a light pressure ebbs down from between the eyes. As it soothes muscles and releases tension, a deep relaxation envelops users that can potentially lock users to their couches if used in high amounts.

As alluded to earlier, G13 Diesel is an absolutely potent strain that caters mostly to thrill seekers. Still, beginners may enjoy the strain under the guidance of a seasoned friend.

Like its parents, G13 Diesel has a pungent diesel aroma with a subtle chemical hint of ammonia. Enhancing it is a sweet citrus that seems freshly picked due to its hints of wet soil.

Similar to its scent, G13 has a strong sour diesel flavor with a tinge of citrus. Drawn in, its earthy undertones take center stage. Interestingly, it leaves an aftertaste of sweetened honey when the smoke is exhaled.

G13 Diesel, like other strains, dries the eyes. And, as cannabinoids begin to interfere with the production of saliva, a cottonmouth is likely as well. Dehydration is not an uncommon side effect when using marijuana. It is usually quite mild and often goes away with time. Still, many users brace themselves by having a glass of water nearby.

It is important to pace potent strains like G13 Diesel. Otherwise, the well-balanced bud’s intense onset can catch users off guard. Apart from the temporary dizziness, some also experience a mild headache. Moderation, however, will keep such effects at bay.

G13 Diesel is highly distinguished for the recreational high it delivers. But, many enthusiasts recognize the reprieve it provides to patients suffering from certain medical conditions. This is because the same psychoactive compounds have various therapeutic benefits in the body.

Among the hybrid’s best abilities is relieving stress felt prior to using it. Its mood-enhancing buzz calms overwhelming dread, stabilizes emotions, and positively affects behavior. For this reason, it provides comfort to people with anxiety, depression and other mental illnesses like PTSD.

Apart from the behavioral, G13 Diesel delivers an invigorating physical buzz that gets rid of fatigue while simultaneously easing pain. In relaxing the body, the bud also soothes away the sharp sting of spasms in the stomach.

The same stimulating compound also encourages a hearty appetite. As such, one of the best times to use G13 Diesel is right before a meal.

Head Seeds consider G13 Diesel among their most hardy plans. It performs well regardless of its growing space because of its thick stems. Equally sturdy are its branches which do not break off at the weight of its buds or from the strong gusts of wind in natural environments. It also has high resistance against nutrient burn because of its heavy feeding qualities.

Arguably, G13 Diesel is best cultivated indoors where growers can easily provide environmental stability as important factors like temperature, humidity, and lighting are all within an arm’s reach. For those with limited space, it is necessary to top the plant early to keep it short.

Because of its perfectly split genes, G13 Diesel adapts to both the Screen and Sea of Green method. Other than that, cultivators may want to invest in a good ventilation system as the strain’s smell gets strong during the flowering phase.

At the moment, G13 Diesel is only available in regular form. Because at least 50% of the batch is expected to be male, aspiring growers will have to incorporate pre-germination methods like soaking to encourage more calyx-filled plants. Applying Low-Stress Training during the flowering phase will keep the successful females from turning into hermaphrodites.

Once mature, G13 Diesel produces dense buds that taper on both ends. Adding to its appeal are the flashes of lime and gold against the backdrop of its forest green hue. Meanwhile, a thick coat of trichomes allude to its potency.

G13 Diesel takes a relatively short 8 to 9 weeks to fully flower. It produces 10 to 12 ounces buds per square meter. Under the expert care of seasoned grower, it is possible for the plant to blossom a week earlier or yield higher.

Garden grown G13 Diesel blossoms between the first to third week of October with each plant yielding at least 12 ounces worth of buds.

Have you ever smoked or grown your own G13 Diesel? Please let me know what you think about this marijuana strain in the comments below.