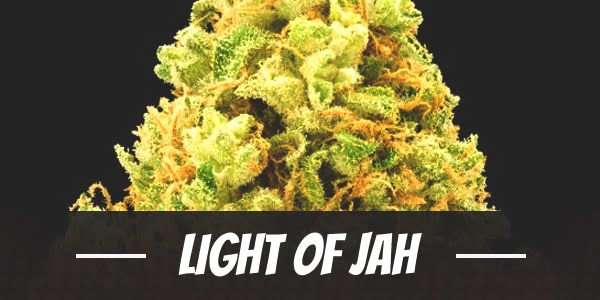 Jah, in Rastafari, is synonymous to the Lord God of Israel whose light shines forever and guides those in need. Interestingly, the Sativa-dominant Light of Jah erases negativity so users find clarity in spite of distressing situations.

Information about Light of Jah:

With THC levels ranging from 24% to 26%, Light of Jah is indeed an immensely potent strain that mostly caters to thrill seekers. Still, beginners may use the strain under the supervision of a seasoned friend.

One thing though, Light of Jah is often used to refer to Jack Herer. However, many use the same name pertaining to a cross of the latter with the pure Indica Afghani. For this reason, it remains an elusive strain with a mysterious past.

Information about Light of Jah:

Figuratively speaking, Light of Jah’s psychedelic high hits fast like the speed of light. Almost immediately after the first two or three puffs, a rush of energy invigorates the body through and through.

Its initial onset, however, is most notable in the mind where it enhances the mood and leaves users feeling happy. A great recreational strain, the Sativa-leaning herb encourages an upbeat disposition that can often be a source of confidence for those who want to share ideas.

After about an hour or two, the same uplifting buzz from between the eyes ebbs down to the rest of the body. It mimics the calming rhythm of waves as it soothes each muscle it passes. Keeping the powerful Indica effects from totally enveloping users is the surge of energy from the onset.

Because of its great wake-and-bake qualities, Light of Jah is perfect for morning and early afternoon use. But, it is a must to control one’s dosage due to the herb’s THC levels.

Jack Herer’s influence is obvious in Light of Jah’s fragrance. Like the former, it has the pungent yet refreshing scent of pine accentuated by notes of wet soil. Broken apart or combusted, subtle hints of fruit blend together with overtones of wood.

Perfectly contrasting Light of Jah’s incense-like aroma is its sweet, fruity flavor. Enhancing the strong tropical notes is a dry and spicy hash that leaves a woody aftertaste of pine on the exhale.

Light of Jah’s THC content and rapid onset can sometimes catch individuals off guard with either a temporary dizziness or headache. This is a rare occurrence though and usually only happens when too much of the bud is drawn in. A more common side effect of marijuana is dehydration which usually comes in the form of red eyes and a cottonmouth. For these reasons, it is best to have some water nearby.

Presumably, Light of Jah’s application does not exceed recreation. Still, its psychedelic buzz provides a reprieve against a plethora of health conditions. As such, it remains pharmacologically valuable for many users from medical marijuana community.

As a Sativa-leaning bud, however, its best attribute is undoubtedly its stress-busting high. It stabilizes turbulent emotions while simultaneously enhancing the mood. The same stimulating compound also encourages a hearty appetite. At the same time, its antiemetic properties keep people from vomiting. For this reason, Light of Jah is a perfect companion for cancer patients experiencing the nauseating side effects of chemotherapy.

Other physical benefits of Light of Jah include its soothing body high which effectively reduces redness, swelling, and pain. By relaxing users mentally and physically, the herb also increases not only the quantity but also quality of sleep.

Light of Jah is a tall plant that necessitates height management techniques like early topping especially for those with limited growing spaces. Pruning is also necessary so light reaches lower parts of the plant while nutrients evenly distribute themselves among healthier budding sites. Meanwhile, its thin stems and branches that are easily swayed by strong gusts of wind require support through bending so both grow stronger.

Like other predominantly Sativa herbs, Light of Jah has a propensity for warm, semi-humid climates. This is not to say that the plant will not do well in the short summers of the northern latitude. Rather, it may take longer to flower compared to its sturdier Indica counterpart. For this reason, many growers prefer cultivating their strain indoors where factors like lighting, temperature, and humidity.

Soil is arguably the best medium for this plant as it unlocks the full flavors of Light of Jah’s terpene profile. Hydroponic systems are also welcome as they can yield ‘cleaner’ buds.

It takes a long 10 to 12 weeks for Light of Jah to fully mature but it rewards patient growers with 12 to 16 ounces of buds per square meter.

A tropical climate and location matter when growing Sativa-dominant strains like Light of Jah. In the northern hemisphere, it blooms between the last week of October to the second or third week of November. Once mature, it yields at least 16 ounces of buds per plant.

Have you ever smoked or grown your own Light of Jah? Please let me know what you think about this marijuana strain in the comments below.

0 comments on “Light of Jah Strain”