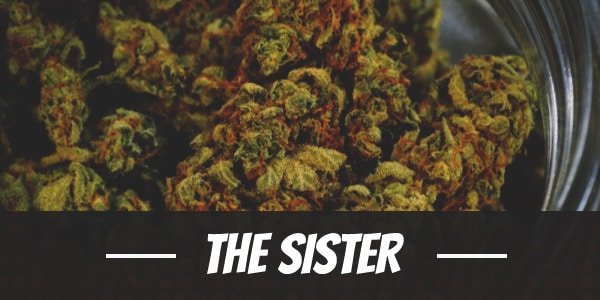 The Sister is an Indica dominant strain with the same genetics as the world famous Chemdawg. Hence, the name; as many realize it is the elusive phenotype of the latter. A ‘sister,’ so to say. After all, they do come from the same landrace parents – Nepalese and Thai.

Information about The Sister:

Indigenous cannabis from such equatorial regions is often cerebral focused. What separates Nepalese from the Thai variety is its effects. Though a pure Sativa, the former has a heavy-hitting body buzz that is usually associated with Indicas.

Like Chemdawg, The Sister has impressive levels of THC that average up to 19%. While presumably intended for recreational use, medical users find comfort in its euphoric and deeply relaxing effects. As such, it remains valuable to the cannabis community as a reprieve against various mental and physical afflictions.

Information about The Sister:

Despite its predominantly Indica genes, The Sister’s high emerges with a potent euphoric rush to the head. As it spreads, it leaves the user feeling happy from within. But, that is not all. The clearheaded high facilitates the free flow of profound thoughts and innovative ideas which come in handy for casual users.

TIP: Looking to buy The Sister seeds? Check out this marijuana seed shop

Together with an uplifting buzz, it inspires a creative surge that gets one up from their couches and works on personal projects. After about an hour or two, the tingling Indica effects trickle down from behind the eyes. Gentle at first, it soon begins to intensify with each toke. But, rather than overwhelming the user, it promotes comfort and relaxation. In fact, many find themselves finishing their tasks faster.

The Sister has a pungent citric aroma that is accented by refreshing notes of pine. Its sweet overtones are matched by sour undertones of diesel.

Carrying over to The Sister’s flavor is its strong citrus aroma. Though tangy, sweet undertones blended with woody hints of pine make the smoke more palatable. On the exhale, a diesel aftertaste leaves a lasting impression on the palate.

Users of The Sister usually experience dehydration. This is not surprising as cannabinoids do inhibit the production of moisture in the salivary glands. Besides causing a cottonmouth, marijuana can also dry the eyes. Thankfully, both are mild and easily mitigated by downing water. Although, users will have to avoid toking too much in a single hit as it can be temporarily dizzying.

This uneasiness can be easily mitigated by proper hydration and appropriate consumption. In the same way, these effects are known to only be temporary. As with all other potent strains, usage should be done with caution to avoid such unexpected effects.

The Sister’s happy euphoric buzz helps users with depression manage their mental illness by temporarily overturning its common symptoms – feelings of emptiness and the constant bombardment of self-deprecating thoughts. It may also be used as a stress-reliever and, even just for a moment, ease the constant anxiety.

TIP: Looking to buy The Sister seeds? Check out this marijuana seed shop

Additionally, its high levels of THC contribute to its powerful analgesic properties. A natural painkiller, The Sister appeases aches beginning from the temples. And, as it reaches the stomach, it stimulates the appetite. For casual users, it can mean just getting hungry. But, for food-deprived bodies, the hybrid soothes away the sharp sting caused by hunger and readies the stomach for a meal. Meanwhile, The Sister’s antiemetic properties prevent the queasiness that usually exacerbates nausea and vomiting.

Some experience is required for growers who wish to cultivate The Sister well. Despite its sturdy Indica structure, it inherited its parents’ preference for long, sunny days and even longer summers of its tropical parents. As such, it is easily affected by the sudden change in temperature or humidity once autumn begins. With that said, The Sister is likely prone to molds and mildew as well.

Of course, all hope is not lost for growers from the northern hemisphere. By germinating the seeds earlier, breeders can take advantage of the short summer and its sunlight. There is also the option of cultivating the plant inside a controlled environment where aspiring growers adjust factors such as lighting, temperature, and humidity to mimic that of a Mediterranean environment.

Like other Indica-leaning strains, The Sister has a short flowering period. After blossoming for about 7 to 9 weeks, it yields up to 12 ounces of buds per square meter. But, this amount can double under the expert care of a seasoned grower.

The Sister should flower anywhere between the last week of September up to the second or third week of October. Once ready for harvest, growers can expect at least 12 ounces of buds per plant.

Have you ever smoked or grown your own The Sister? Please let me know what you think about this marijuana strain in the comments below.

0 comments on “The Sister Strain”