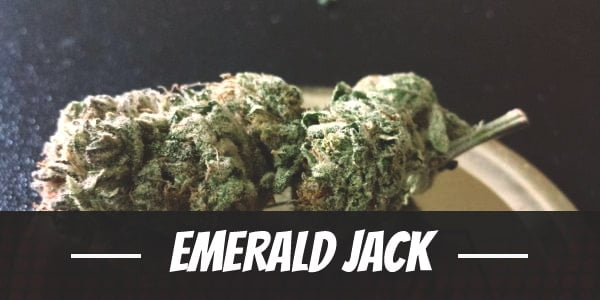 Emerald is the most calming color. Among the things it encourages, reflection is one. True to its color, the strain we feature here does induce creative thoughts. But use enough of it, and people start to go into deep introspection.

On its name, it is actually a play on its parents, both of which happens to be among the most popular ones. For strains to have a following, they must have something unique or extraordinary. Such is the case of Jack Herer and Emerald OG.

Emerald Jack has a dominant Sativa side, no doubt, an influence of Jack Herer. It is a multi-awarded strain that delivers intense cerebral effects as well as producing heavy resins.

On the other hand, Emerald Jack inherited its Indica side from Emerald OG, known for its ability to induce deep relaxation.

By combining the genetics of both parents, the breeder Emerald Triangle hopes to take the best traits and pass it on to the offspring. The result is a 70% Sativa hybrid that has a THC content of 20% to 24%.

Most Sativa dominant strains are fast acting. In other words, it does not take too long for its effects to kick in. In fact, there are many in which users feel the mental high as soon as a few tokes. In the case of Emerald Jack, though, it acts a little slow. As such, some people may think it is not potent.

As mentioned, its THC content can reach 24%, and that is insane. So, it is in the best interest of everyone not to underestimate this strain. Doing so may lead to some undesirable adverse reactions. But used in moderation or well within limit, it brings on an incredible mental high.

One of the early signs of its onset is a sensation of feeling good. It is due to the mood-altering properties of Emerald Jack that users take a turn for the positive. The uplifting feeling then induces people to feel happy and euphoric. At the same time, the creative juices in the brain ooze out that ideas keeping popping into the head.

Although users tend to remain clear headed, and some may even describe the experience as having a better focus, it is actually the opposite. What we mean by this is that jumping from one idea to another is not conducive to finishing tasks.

To a lesser degree, Emerald Jack may also provide a little boost in energy. Many users could use more of that as they start to feel aroused.

Meanwhile, as the strain works its magic on the mind and behavior, the heavy Indica effects start to creep in. As it washes down the body, an overwhelming sense of relaxation manifests itself. It does so without leading to a couch-lock.

Emerald Jack is not only a beautiful color, but it is also pleasant to smell. It has the aroma of orange and pine accompanied by a skunky undertone of the earth.

The mild skunky odor carries over to its taste. It also has a more distinct flavor of citrus and pine blended in. As such, Emerald Jack is not too shabby at all when it comes to this department.

To be clear, Emerald Jack is one strain that people who are predisposed to or going through anxiety must avoid. It is because along with the excellent mental and body effects it induces, it also causes people to feel more anxious. As such, even those who are going through depression should also not use this hybrid.

Having said that, a typical reaction to the use of cannabis is also evident with this one. Dry mouth and eyes are typical and are nothing more than a nuisance. In some instances, too, a few people may feel light headed.

The ability of Emerald Jack to alter moods has its benefits for medical marijuana users. One of which is to take away stress. For the same reason, it should also prove helpful in cases of depression and PTSD.

Also, as users feel euphoric, their mind is taken away from physical discomforts. Add to that the relaxing effects it induces, the strain offers pain relief if it is mild. As such people who are suffering from chronic illnesses including those with spasticity should find comfort with its use.

To a lesser degree, one of the effects brought on by Sativa dominant strains is a boost in energy. It can be likened to drinking power drinks or having a cup of double espresso. In this way, the hybrid can help fight fatigue.

Not only is the Emerald Jack strain a Sativa-dominant plant, but it also grows like one. As such, it can reach up to 10 feet tall. Amidst the long emerald green leaves, its cone-shaped buds are covered with resinous crystals and orange hairs.

Fortunately, it is not a difficult plant to cultivate. Although there may be a learning curve for beginners. Regardless where growers prefer, it thrives equally well outdoor and indoor. Of course, if it is inside the house, the plant needs to be topped off early to keep it short and encourage a little more outward growth.

Indoors
Compared to other Sativa plants, one can say that the Emerald Jack has a faster growth. That is because it reaches its flowering phase on the ninth week. Even better is the 18 to 26 ounces of buds it can produce.

Outdoors
Left to grow in the open, the plant justifies its height with a bountiful harvest of 24 ounces or possibly more. It should reach its flowering phase during mid-October.

Have you ever smoked or grown your own Emerald Jack? Please let me know what you think about this marijuana strain in the comments below.