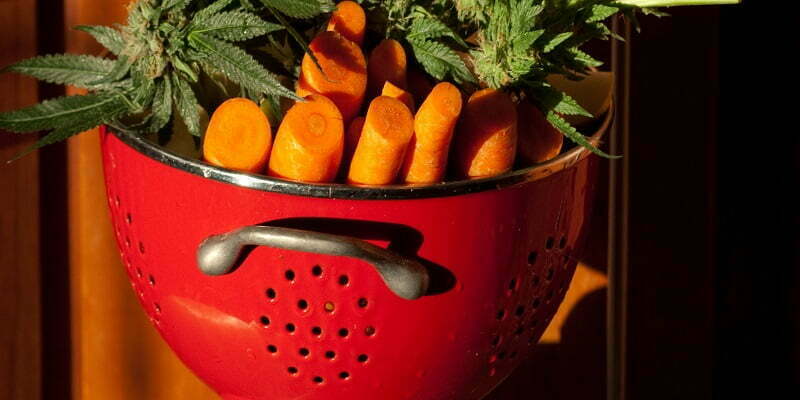 Most of the recipes in this section work under the assumption that you’ll be using cannabis leaf. Naturally, leaf is the best value for cooking with pot because you can get a lot for a little. Sometimes, however, you’ll have something more potent on hand like bud, hashish, or kief.

Hash has been used in many traditional pot recipes (potentially because it has considerably less of the “weedy” taste found in some leaf). For more potent pot preparations in your recipes then use these conversion factors to control your dose.

Grow your own plants so you can always have enough cannabis to always cook something with it! Download my free Grow Bible for all the grow info you need.

For 1 ounce of regular domestic leaf called for in the recipe, use:

Consuming marijuana is usually a very pleasant way to take it as a medicine. Unlike the immediacy you’ll find with smoked weed, ingested weed has a more gradual effect that you will start to notice about 20 to 30 minutes after eating on an empty stomach and an hour after heavy eating.

Edible marijuana’s main problem is that its effects are largely unpredictable. Depending on the state of your digestive system, the THC may or may not be well absorbed. In that event, the dose might be too much or too little. Furthermore, the potency of edibles is hard to gauge beforehand. There are always going to be different recipes, batches, and ingredients that can yield substantially different results. Unfortunately, DEA regulations dictate that testing the potency of cannabis edibles is strictly forbidden.

After the effects begin, they tend to peak within one hour and then remain at that level for 1.5 to 2 hours. The following hour or two will see a gradual decrescendo in the effect. In order to avoid sharp peak effects, some people opt to nibble on the medicine instead of eating it all at once. In fact, they might eat as little as 10% of their highest dose, then take a bite every 15 to 20 minutes or so. They might not finish the entire portion for several more hours.

The effect of ingestion

Effects are felt with some variability and often depend on how much food you have already eaten. Eating marijuana brownies for dessert after a big meal can delay the high for up to 2 to 3 hours. If you eat the brownie on an empty stomach, you’ll feel the effects much more quickly.

Seeing as how the wait is so long, it can be frustrating when trying to find the right amount to use. An easy way to figure out the right dose is to eat half of the recommended dose first. If it doesn’t provide relief, wait until the effects have diminished. Once the feeling is gone, increase the previous dosage by 10% until you find a happy medium.

You can also nibble at the food to ingest only a small portion of a much larger dose at any one time. The effects will never reach the peak of a full dose, but they will provide relief over a long period of time.

To dissolve marijuana, it’s best to use butter, oil, milk, or alcohol. This is because THC is oil- and fat-soluble, but not water-soluble.

Commercially, it’s used in many foods like salad dressings. These dressings often don’t separate immediately because the emulsifier forces their component liquids to break up into tiny bubbles when you shake them. The bubbles take much longer to float or sink into position. Lecithin can be found in liquid and dry forms at health food stores. Glycerin can also be used to dissolve cannabinoids.

A few patients enjoy making tea by steeping marijuana in hot water, but this is notoriously inefficient at producing any effects. THC is not water soluble, so very little of it gets mixed into the tea. If you boil marijuana in hot water for 15 to 30 minutes (the longer, the better), a miniscule amount of THC will remain in an oily film floating atop the water when it eventually cools down. While you can use it without mixing it with oil or alcohol, the cannabinoids will only pass through the intestines to the bloodstream in small amounts, making the effect nearly negligible.

In addition, boiling water is not hot enough to effectively convert the THC acid (THCA) in the plant to active THC. We’ve already noted that THCA has little ostensible activity, although it’s possible that it might benefit some patients. A study of cannabis tea from the Netherlands Office of Medicinal Cannabis discovered that, when steeped in boiling water for 15 minutes, marijuana produced 4 times as much THCA as THC. All in all, only 5% of the THC was transferred to the water (Hazekamp). Adding milk or butter can strengthen the marijuana tea by facilitating THC extraction, but you can also just heat the marijuana beforehand to convert the inactive THCA into active THC.

7 comments on “Cooking With Marijuana Buds, Hash, Or Kief”