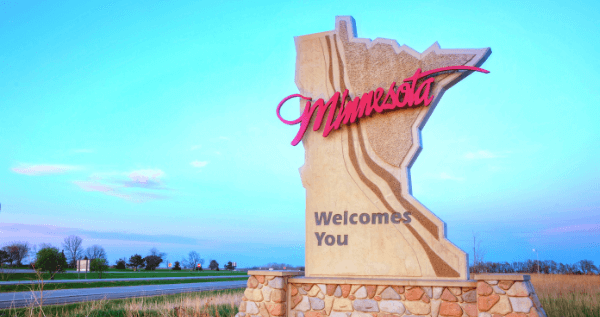 Marijuana is not legal in Minnesota, but the laws there make it very hard to get in trouble. Minnesota approved a medical marijuana program in 2014 and decriminalized possession before that.

You have to do a lot to go to jail; that is reserved for those who have a lot (more than 1.5 ounces) of weed.  If you are a personal user of marijuana, you might have to pay a fine if caught, but you will not go to jail.

No laws on growing

When it comes to growing marijuana, Minnesota has no specific laws, but if caught, any charges are based on the weight of the plant.  That means, if your plants are 42 grams or less you will only have up to a $200 fine, even less if it’s your first time.  In term of medical users, the state is more clear.

Medical marijuana users are prohibited from growing their own plants. If they do grow weed in Minnesota, it will be the same legally as not being a part of the medical program.

Minnesota’s medical marijuana program is still in development, but they have already set some rules. One surprising rule is that they will not be allowing any smokable forms of marijuana.

We selected the best seeds to grow in the Minnesota climate! If you are planning to grow outdoors then, check out our custom collection of Minnesota weather-approved seeds.

If you are treating amyotrophic lateral sclerosis, cancer/cachexia, glaucoma, HIV/AIDS, seizures, severe and persistent muscle spasms, terminal illness or Tourette’s syndrome you will have to use edible preparations such as marijuana butter if you want to stay legal.

If you want to make these things yourself, instead of paying a fortune at a dispensary, grow weed at home and make it yourself.

It may be hard to get in trouble for using marijuana in Minnesota, but you need to remember to pay your weed tax! Minnesota participates in a tax stamp program that requires those purchasing marijuana to also purchase stamps to cover taxes. The tax rate in Minnesota is $3.50 per gram.

Also read How to open a dispensary in Minnesota

If you are caught with marijuana and do not have stamps with your weed, you will face a penalty of twice the original cost. There is also the chance of jail time and additional fines. Medical marijuana patients will not be required to buy stamps, but they will also not be allowed to have plants or smokable weed.

Although Minnesota is pretty nice about weed usage, they aren’t too happy about growers. For that reason, it is a good idea to grow as discretely as possible if you try your chances. You do not want to get caught, and if you do, that plant should be under 42 grams.

Instead of making it hard on yourself, download and read the Marijuana Grow Bible. In it, Robert explains the best ways to grow marijuana in any condition. You’ll learn how to grow the best weed from a weed growing pro- and it’s free.

FAQ about growing marijuana in Minnesota

Is marijuana legal in Minnesota?

Marijuana is not legal in Minnesota, but the laws are not as hard as they are in other places, If you are using marijuana for personal use, you might have to pay a fine if caught, but you will not go to jail

Is growing marijuana legal in Minnesota?

There are no specific laws on growing marijuana in Minnesota, but if you get caught, you’ll have to pay charges based on the weight of the plant. That means, anything over 42 grams you will get a fine of $200

Do I need to pay tax on weed in Minnesota?

Yes, Minnesota has a tax stamp program, so if you buy weed you are also required to buy purchase stamps to cover taxes. The tax rate in Minnesota is $3.50 per gram