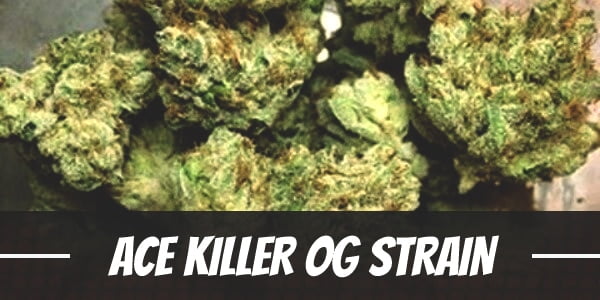 Ace Killer OG is an ace in its field. At up to 27% THC, it can easily knock out users who disobey the age-old adage of staying within one’s limits.

At the same time, it also has great credentials in the medical cannabis industry through its 2% CBD which relieve various mental and physical maladies.

Indeed, one can say that the mystery breeders of Ace Killer OG definitely poured an immense amount of effort on the Indica-dominant hybrid.

It took the cerebral euphoria of White Fire OG, slow-starting head buzz of King’s Kush, and the potent Kosher Kush before finally completing it with a top secret strain.

When used, Ace Killer OG delivers a powerful high that knocks every thrill seeker’s dream socks off. Still, beginners may enjoy the strain with the help of a seasoned friend.

Ace Killer OG likes to sneak up on unsuspecting users with its slow-starting high.

Hence, it is important to start to gradually build up dosage rather than smoking the pot all in one go.

With that said, its onset starts with a warm euphoria blanketing the mind.

It conjures cheery thoughts and memories that leave users feeling happy from within. Often, too, it is accompanied by hunger.

After all, using one’s mind does use energy. Having snacks within arm’s reach will save one from a trip to the kitchen.

After about an hour or two, a warm sensation trickles down from the temples.

It destroys tension, tightness, and pain in its wake as the entire body succumbs to a feeling of utter relaxation.

Eventually, the heaviness in the limbs goads users to the bed.

The drowsiness has one drifting off to dreamland almost immediately once it takes effect.

Indica-dominant strains are often best used at night and Ace Killer OG is no different.

Otherwise, it can hamper one’s productivity at work.

The pungent buds of the strain give off an aroma akin to the acrid yet sour aroma of diesel.

But, when broken apart or combusted, it replaces the chemical scent with that of woody pine. Accentuating it are undertones of wet soil.

Right after drawing its smoke in, the flavors of diesel and wood burst in the palate.

Subtly sour at first, it later develops into a refreshing pine that leaves an earthy aftertaste on the exhale.

Users of Ace Killer OG may feel disoriented because of its potency.

However, one’s individual tolerance may also play a part.

In such cases, it is best to start the dosage low before gradually building it up.

A more unavoidable reaction to smoking marijuana is a cottonmouth.

This is due to cannabinoids interfering with the production of saliva.

Thankfully, both side effects are mild and often go away with time. Still, if symptoms persist, downing a few glasses of water will ease the symptoms.

At up to 2%, Ace Killer OG’s CBD content is higher than most recreational strains.

Combined with the effects of other cannabinoids like THC, provides users with temporary reprieve against a variety of ailments.

Its happy high, for example, eases the mind from the overwhelming dread that stress brings.

In doing so, it also temporarily relieves symptoms of mental health issues like depression, PTSD, and anxiety.

The same psychoactive compound that induces the uplifting buzz also has a soothing effect on the muscles that completely relieves it of pain.

It relieves it of tightness and, as a result, prevents it from contracting involuntarily.

For this reason, it provides comfort to patients suffering from spasms due to conditions like epilepsy.

Sleep is a wondrous process that renews cells, rejuvenates the body, and improves temperaments.

And, through the temporary relief that Ace Killer OG brings, users slip into bed faster and easier.

Moreover, the bud not only increases the hours of rest but also the quantity too.

Ace Killer OG has a natural resistance to temperature and weather fluctuations.

For this reason, it is a great plant to grow in the northern hemisphere where it is cooler.

Moreover, it has sturdy branches that grow stronger from the light breeze.

Keeping the plant healthy is a top priority among growers.

After all, it builds protection against pests and disease that may ravage Ace Killer OG.

As such, having adequate gardening skills as well as being knowledgeable of the growing process is a great advantage.

In controlled settings, its thick foliage can pose a great problem to even airflow in the lower canopy.

For this reason, it is imperative that growers prune and trim the plant often.

Cutting away its dead parts will also improve nutrient circulation and light distribution.

With that said, indoor growers may maximize yields through the use of soilless mediums like coco coir and hydroponics.

During the flowering phase, Ace Killer OG does tend to fill the growing room with its thick diesel scent.

Odor control filters are a necessity against pungency. Moreover, it helps keep the area discreet.

The potent buds of Ace Killer OG will mature after 7 to 9 weeks of flowering indoors. Once ready for harvest, growers can harvest up to 12 ounces of buds.

What is the Ace Killer OG strain yield?

How much THC does Ace Killer OG have?

What are the origins of the Ace Killer OG strain?

Have you ever smoked or grown your own Ace Killer OG? Please let me know what you think about this marijuana strain in the comments below.