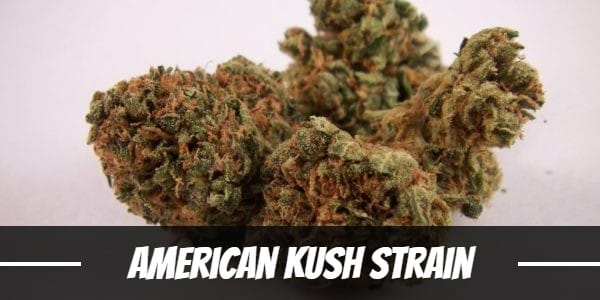 For decades, the cannabis trade is a booming underground industry. Its medical benefits though is indisputable. For that reason, more territories and states worldwide have or will soon legalize its use. It is not surprising then to see more breeders entering the market with new hybrids. One such strain is the American Kush.

Like its predecessors, the Indica-dominant American Kush packs an insane amount of THC. Perfect for use at the end of a tiring day, American Kush can quickly put users in deep relaxation.

American Kush packs quite a punch. As alluded to, it comes with a lot of THC. Tests show that it contains between 18% to as much as 27%. Because of that, it can be overwhelming especially for beginners and those with low tolerance level.

A fast-acting strain, its onset begins with a tingling sensation at the back of the head and the neck. In most hybrids, it takes a while for the Indica traits to manifest. However, that is not the case with American Kush. Almost as soon as a euphoric cerebral high set in, an electrifying sensation travels down the spine and spreads all over the body.

As the Indica traits take over the body, the mental stimulation and uplifting body high leaves users feeling quite happy. Not only that, it continues to intensify and induce deep relaxation. The strain is best used in the evening and is especially helpful to patients who need quality sleep.

One other thing that can be said about the American Kush is that it can knock out people quickly if used in higher amounts.

The distinct aroma of this strain is unique from many Indica-dominant hybrids. It is neither stinky nor strong. Instead, it has a floral scent that is reminiscent of lavender with a citrusy and lemony note.

Like the smell of this strain, its taste is a concoction of lavender with lemon and lime as well as a spicy hint. It is unique in that its flavor is reminiscent of coffee and has an herbal quality to it.

Like other cannabis, the American Kush can cause dry eyes and cottonmouth. As a way to alleviate, keep the throat moist by drinking water. Some other adverse effects include having a headache or feeling slightly more anxious.

The same effects that endeared American Kush to recreational users can provide comfort to a plethora of medical conditions.

Looking to buy seeds like American Kush? Check out our marijuana seed bank.

The way it induces a euphoric buzz followed by a relaxing body high can help people de-stress. Furthermore, as it soothes muscles, not only does relieve users of tensions but also acts as a pain reliever. As such, those suffering from chronic pains can find comfort in its use.

In most cases, the American Kush, in putting people in deep relaxation, can induce heavy drowsiness. Besides using it to wind up a long day, people with trouble sleeping such as insomniacs can use it as an aid to sleeping.

American Kush may not be the ideal strain for beginners in growing cannabis. One reason is that it requires a lot of attention and maintenance. With that said, it is also a sturdy plant in that it can tolerate changes in the temperature. Also, to ensure better light penetration and air circulation, pruning its leaves is necessary.

AKG recommends feeding the plant with a higher than average amount of nitrogen in the first three weeks. Only then is phosphorous and potassium increased in preparation for its transition.

American Kush grows like a typical Indica plant. It does have a somewhat quicker flowering period of 6 to 8 weeks. Once harvested, it should provide up to 12 ounces of buds per square meter.

American Kush, grown in the backyard or the garden, thrives best in a dry and warm climate. In most cases, the flowering period should begin before the end of October. It is quite generous in that it can produce at least 12 ounces of buds or more per plant.

What is the American Kush strain yield?

How much THC does American Kush have?

What are the origins of the American Kush strain?

Have you ever smoked or grown your own American Kush? Please let me know what you think about this marijuana strain in the comments below.