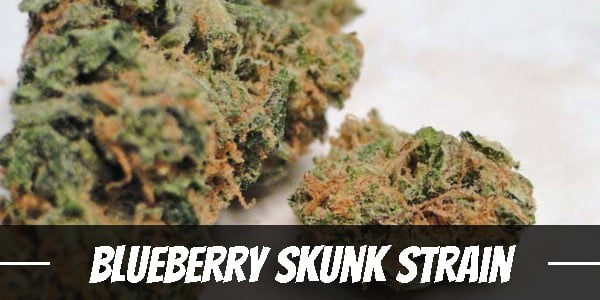 Living up to the long tradition of breeding excellence in the Netherlands, the Flying Dutchman released a unique hybrid that boasts of excellent Sativa qualities despite having a mostly Indica plant structure.

Blueberry Skunk, from its name alone, is already indicative of its lineage. Both Blueberry and Skunk No. 1 boasts of distinct aroma that has helped in making them worldwide sensations. But fragrance alone does not make for an excellent strain, let alone legends.

Since the 70s, Blueberry is well-regarded as an exceptional Indica that culminated in its bagging the top honors of the 2000 High Times Cannabis Cup. Serving as a genetic base, it passes on the same growth structure and traits that have helped its users find complete relaxation. The genetics of Skunk No. 1 introduced to Blueberry contributed not only its unique smell but also the ability to bring users to a soaring high.

Like Blueberry, Skunk No. 1 has served as the cornerstone of numerous other award-winning plants. In pairing these two, the Flying Dutchman has successfully developed a hybrid that epitomizes the expertise of Dutch breeders in the marijuana scene. While aimed at recreational users, Blueberry Skunk is also not without its medical benefits. After all, the CBD content it possesses is a bit higher than the average strains.

Overall, the effects of Blueberry Skunk is long lasting that could go on for at least three hours. It begins with a euphoric cerebral high that not only makes one feel cheerful but also sociable. While pronounced, the mental stimulation is not debilitating. Far from it, the hybrid promotes a clear mind and inspires creative thoughts and ideas.

Gradually, a wave of uplifting buzz envelops the body and followed by tingling sensations. It may cause users to slow down from physical activities as heaviness builds upon the limbs. In most cases, the relaxing quality of the hybrid is not at all crippling. And during this time when one feels relaxed, the mind remains sharp while the cerebral high continues to be euphoric. It is for this reason that the perception is that its effects tend to be more cerebral despite being a mostly Indica marijuana.

It may take an hour or two, but at some point, most users end up succumbing to the full body high. It is at this time when drowsiness sets in and most people are likely to fall asleep.

Blueberry Skunk is an exceptionally potent strain. Ideally, people should use it in moderation. However, that may not always be the case. In excess, its effects can be devastating. The mental buzz can be overbearing and render one less productive in case there are tasks to do. Once the full body effects kick in, there is no getting off the couch at all.

It is not unusual for breeders to put the names of two or more genetic bases together in naming a new hybrid. That much is apparent with Blueberry Skunk. And, that is also exactly how it smells. A skunky aroma dominates its earthy odor even as it also emits a subtle scent of blueberry with a sweet note.

The scent of blueberry may be a bit underwhelming but as soon as the first toke, its sweet and fruity flavors bursts in the mouth. The same skunky fragrance is present but mild. Upon exhale, the hybrid leaves a spicy aftertaste.

There are no surprises here. Using Blueberry Skunk results in dry mouth and eyes. Let it be known too that this hybrid can cause people to feel dizzy or have a headache.

Although it is not likely to occur, it is also possible that some users may feel a bit more anxious. Often, this is because of using too much.

In some tests, the CBD content of Blueberry Skunk is found to range between 0.2% to 0.5%. It is significantly higher than most recreational marijuana strains. Together with terpenes and other cannabinoids, the ability to relieve pain is what makes it attractive to medical users.

Looking to buy seeds like Blueberry Skunk? Check out our marijuana seed bank.

While the use of this hybrid may lead to a headache, and that happens to users who overindulge, many people it for relief from the same condition. Apart from that, it is also capable of soothing aching muscles. Thus, it can provide a reprieve from spasms and cramps. These same compounds can also help manage gastrointestinal problems including nausea.

Its ability to put one on a euphoric high even while in complete relaxation allows people to battle stress.

One thing that most seasoned marijuana users have come to understand is that many strains do cause the munchies. Such is the case with Blueberry Skunk. The trick to using it to stimulate the appetite is to use only a small amount so as not to be crippled by its potentially devastating effects.

The Flying Dutchman has done home growers a favor by releasing Blueberry Skunk feminized seeds. It almost eliminates the chances of a male plant sprouting. Instead of ending up with wasted efforts once males appear and discarded, one can focus on more on its care. The plant can grow indoors or outdoors using either soil as a medium or hydroponics.

When planted inside a grow tent, space is limited. It is best to top the plant early and combine with stress training to encourage lateral branching. Because it is from feminized seeds, the regular trimming and pruning that growers must do are less likely to lead to excessive stress. In other words, there is virtually no chance that the Blueberry Skunk will turn into a male or a hermaphrodite.

It may grow slowly in the beginning and through much of the vegetative period. But once the flowering period begins, Blueberry Skunk can quickly double or triple its size. Once mature, the plant produces dense buds. These are not only huge but also beautiful to look at with its forest green colors and blue hues. Amber pistils cover the flowers as well as a generous layer of frosty trichomes.

It takes only 8 to 9 weeks for the plant to complete the flowering period provided the conditions are optimal. Once it is ready for harvest, the estimated yield per square meter is between 12 to 14 ounces.

Blueberry Skunk thrives best in an environment that is warm and similar to the Mediterranean. Its height is average, but the yield is indeed anything but ordinary. Under the care of expert growers, each plant can produce 14 ounces of buds or more before the end of October.

What is the Blueberry Skunk strain yield?

How much THC does Blueberry Skunk have?

What are the origins of the Blueberry Skunk strain?

Blueberry Skunk was created from a mix between Blueberry and Skunk No. 1.

Have you ever smoked or grown your own Blueberry Skunk? Please let me know what you think about this marijuana strain in the comments below.