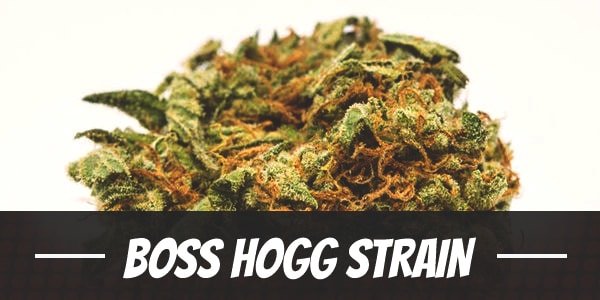 Fans of the television series The Dukes of Hazzard will squeal with delight after taking a toke out of Boss Hogg.

Although the character it takes its name from is a greedy villain, the strain is quite far from being unpleasant.

If anything, the only similarity is the thick smoke surrounding the bud once it is combusted.

Boss Hogg is a pleasant strain that eases the day’s headaches and fatigue brought about by stress.

It has an interesting effect though. While it delivers a soothing Indica buzz, its effects are cerebrally and physically stimulating especially with its THC levels that average between 17% to 20%. And so, its versatility attracts users with different preferences.

Interestingly, in creating the strain, Cali Connection did not choose two parents with different genetics.

Rather, it used Chemdawg 4 as a genetic base before crossing it with another Chemdawg 4 backcross thus creating a diesel-flavored, quick-acting strain.

Indica-leaning strains are commonly associated with a heavy-hitting body-focused psychedelic high. To this end, Boss Hogg is quite unique as its onset is heavily cerebral.

Not to mention, its physical effects are quite stimulating. Because of this, the strain is immensely popular among users looking for a relaxing yet motivating influence.

Its initial onset, which starts only minutes after the first few puffs, is marked by a rush of euphoria to the head.

In spite of its intensity, it keeps users level-headed as it clears away cobwebs in the mind. It creates a path for thoughts to flow and form freely.

Armed with new perspectives and a piqued interest, the heightened sense of motivation prompts users to concentrate on tasks or projects for long periods of time.

After about an hour or two, a tingling sensation from the temples ebbs down. It creeps into the muscles, removing tension in its wake.

It soothes the body through and through before blanketing it in deep relaxation.

Keeping it from sending users to bed is the initial head high that busies the mind with an influx of ideas that require action.

To some, the freedom from mental and physical inhibition can be quite arousing.

Used as a bedtime companion, it can create a great atmosphere for partners doing the deed.

Boss Hogg has pungent diesel notes that appeal to lovers of chemical strains the most.

The first whiff reveals an acrid sourness that can be quite sharp to the senses.

Balancing it out is an earthy undertone that comes about after breaking apart or combusting the buds.

Drawn in, Boss Hogg swarms the palate with the sharp sour taste of chemicals.

The diesel flavors, in particular, stand out against a backdrop of earthy undertones.

On the exhale, it leaves an aftertaste of sage and hash that lingers for hours even after the last puff.

Dryness in the eyes and the mouth are two unavoidable reactions to using marijuana, regardless of the strain and how much one consumes of the bud.

Although it is mild, users may still manage the symptoms by downing a few glasses of water throughout the day to stay hydrated.

Greening out is also possible when using Boss Hogg. Its high levels of THC, as well as heavy-hitting high, can be overwhelming.

For example, the heightened awareness to one’s surroundings can trigger anxiety and paranoia especially when used beyond personal limits.

Apart from overconsumption, being easily susceptible to the condition also plays a major role. As such, it is best to stay cautious while smoking the strain.

As a Cali Connection product, Boss Hogg was designed to meet the needs of medical marijuana community.

As such, it should come as no surprise that it provides patients with significant therapeutic benefits

Boss Hogg contains significant medicinal benefits to be of therapeutic value to patients.

For one, its happy high frees the mind of doubts and self-depreciating thoughts.

In calming the overwhelming dread, it effectively relieves stress and manages symptoms of anxiety.

It can be a source of comfort too, for long-time sufferers of depression or PTSD.

The same psychoactive compound also has analgesic qualities that soothe body of aches beginning from the temples.

Along with its anti-inflammatory properties, it relaxes the muscles and prevents it from contracting.

At the same time, it reduces redness and swelling which often send pain signals to the brain.

Paired with the initial cerebral euphoria, the deeply relaxing strain reinvigorates users through and through.

Boss Hogg is not a difficult strain to grow. It is blessed with Indica-leaning genes that provide it with a sturdy and compact structure.

Thus, it can naturally withstand fluctuations in temperatures. Meanwhile, light breezes create add strength to its branches and stalks.

In spite of its great performance outdoors, there are still many who prefer cultivating the plant inside a greenhouse.

The former will improve flavors and intensify scents meanwhile the latter hastens the flowering period as well as increase yields.

TIP: Looking to buy seeds like Boss Hogg? Check out my seed shop

With that said, it is important to prune the plant often when growing it indoors.

Not only that, it also improves nutrient distribution so plants produce more and stay healthy.

Boss Hogg takes about a week longer to flower compared to most Indica-leaning strains.

Harvest usually comes after 8 to 10 weeks with each square meter at least 16 to 18 ounces of buds.

Using the Sea of Green method will help hasten the flowering process as well as produce more buds.

Garden grown Boss Hogg blossoms around October, from the second to the last week.

A vigorous producer, growers can expect to harvest no less than 18 ounces of buds per plant.

Have you ever smoked or grown your own Boss Hogg?