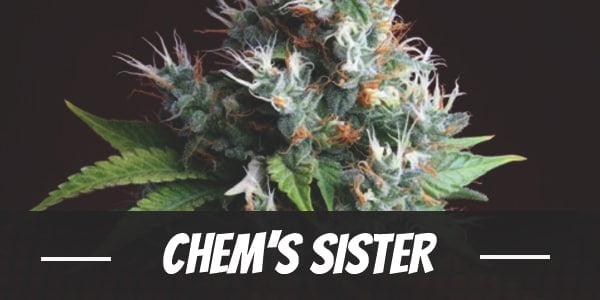 It does not do well to underestimate Chemdawg and its phenotypes, Chem’s Sister in particular. Like its sibling, Chem Sis is a powerhouse. Its THC levels alone, which average between 18% to 27%, are enough to speak of the Sativa-leaning bud’s endless recreational value.

In the cannabis industry, however, it is much more renowned for its incredible therapeutic potential. In fact, it continues to make waves years after its first release in 1996 as ‘Chemdawg A.’ Just recently, it won third place for ‘Best Medical Hybrid’ at the 2016 High Times’ Cannabis Cup.

Because of its high levels of THC, Chem’s Sister is best reserved for seasoned users or patients in need of potent but natural painkillers to supplement medication. Still, beginners may use the strain in low doses under the guidance of an experienced friend.

Fast-acting and cerebral are two adjectives that best describe the onset of Chem’s Sister. And, for good reason. Within minutes after the first two to three puffs, a rush of euphoria enters the mind to fill each crevice with a sense of happiness. Users are left feeling lighter and brighter as each are shot up to high up in the sky.

The upbeat disposition immediately gets rid of one’s dread about work. In its place is a surge of creativity brought about by a smoother flow of thoughts and profound ideations. Along with the mental clarity is a heightened focus that allows users to concentrate on tasks or projects for longer periods of time.

After about an hour or two, an uplifting buzz ebbs down from the temples in waves. Soothing and calming, it embraces each muscle with a gentle relaxation enough to free it of tension. But, it is not at all sedating nor intense and complements the initial mental effects instead. As such, Chem’s Sister makes for a perfect daytime treat.

Chem’s Sister has a fragrance that one would either adore or hate. It carries a skunky diesel aroma that’s balanced out by the smell of sweet cedarwood. Beneath everything is a citric undertone that’s reminiscent to lemons and oranges.

The taste of Chem’s Sister is best described as a blend of citrusy and piney flavors. It is mildly sweet and quite favorable to many. With further savoring and exhalation, a chemical-like flavor comes about. Whether the one will like that chemical touch all depends on their personal preferences.

It is not surprising for Chem’s Sister to dehydrate users. After all, it contains the same moisture-inhibiting cannabinoids found in many strains. The symptoms usually present itself as a cottonmouth and dry eyes. Albeit rare, some also find the strain dizzying. Thankfully, neither are a cause for concern as both are mild. Moreover, each go away after a few hours but downing a few glasses still helps if symptoms persist.

In larger doses, Chem’s Sis can increase anxiety levels and cause users to feel slightly paranoid. For this reason, the bud must always be used with caution and moderation.

In 2016, Chem’s Sister was recognized by fellows at the Cannabis Cup as a top medical strain with immense therapeutic value. Thus, it should come as no surprise that the hybrid provides relief to various patients.

Its THC, along with other cannabinoids like CBD and terpenes, delivers a mood enhancing effect that eases symptoms of mental afflictions like depression. In a similar manner, its uplifting buzz also calms the mind of dread and stress.

The same psychoactive compound also turns into a natural painkiller in high enough levels. It soothes the body of various aches especially in the gastrointestinal tract. As the painful pangs subside, a hearty appetite emerges. And, with its antiemetic properties, Chem’s Sister helps patients with cancer or eating disorders fully ingest food without feeling the need to vomit.

Chemdawg and its sister share many common traits. Both, for example, have high sensitivity to moisture, are susceptible to problems like mold or mildew, and have a penchant for the sunny weather of equatorial regions. In spite of its preference for a Mediterranean climate, it still performs well in high latitudes though it flowers quite late into the year.

Many prefer to cultivate the strain in controlled grow rooms. Apart from added protection against unpredictable environmental factors, growers can easily adjust lighting, temperature, and humidity which are essential for the plant to develop to its full potential.

A good ventilation system is necessary when growing Chem’s Sister. As alluded to earlier, it is hypersensitive to high levels of humidity and requires a dry environment so it can flourish. With all that said, the plant is adaptable to different kinds of mediums. However, if one were going for flavor then soil is the top choice.

Despite being introduced to the cannabis industry in 1966, Chem’s Sister remains to be a clone-only strain. This is understandable though as cuts from the mother plant preserve genes and chemical composition better than seeds. But, it also hints that growers need to be of a certain level before being able to grow the strain.

Chem’s Sister has an indoor flowering period of 10 to 12 weeks. Once ready for harvest, it produces between 12 to 16 ounces of buds per square meter. Applying the Screen of Green method, however, will encourage even higher yields and increased trichome production.

Growers may need to prepare carbon filters or other types of odor control measures though. Being such a potent strain, Chem’s Sister can fill the grow room with an overwhelming scent.

Chem’s Sister can flower as early as the second or third week of October when cultivated by growers from the northern hemisphere. However, it may extend up to the first week of November depending on the weather. Regardless, the strain will produce at least 16 ounces worth of cured buds per plant.

Have you ever smoked or grown your own Chem’s Sister? Please let me know what you think about this marijuana strain in the comments below.

BACK TO TOP
6 of the Fastest Flowering Strains You Can Find!
Mr. Tusk Strain
Jamba Juice Strain